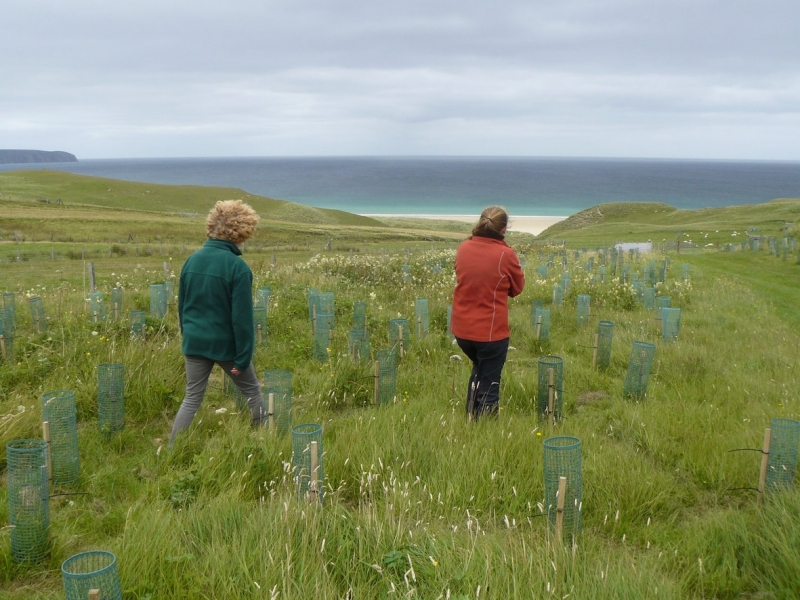 A veritable forest fire of financial destruction is looming over community groups throughout Lewis and Harris who were getting funding from the revenue accrued by community wind turbine operation.

But one project that has now been rescued is a tree planting scheme being run throughout the Outer Hebrides.

Community wind farm charity Point and Sandwick Trust set up the Outer Hebrides Croft Woodlands Project in 2016, in partnership with the Woodland Trust and others.

But Point and Sandwick Trust has been left without any income for up to 18 months as it cannot export its power due to the cable failure between Skye and Harris.

This massive blow forced the wind farm organisation to suspend its programme of grants to good causes– but the Woodland Trust have now stepped into the breach, agreeing to fund the project for a year to allow the work to continue.

The move keeps Croft Woodlands Project Officer Viv Halcrow in post, secures the plantation of around 50,000 trees in croft land throughout the Hebrides in the 2020/21 planting season, and enables the momentum of this ‘legacy’ project to continue.

Calum Macdonald, development manager for the community wind farm, said: “This is fantastic news and we are very grateful to the Woodland Trust for stepping into the breach and allowing the momentum of this scheme to be continued.

“It’s a great example of partnership working and we are determined to continue this scheme into the long-term to leave a legacy for the islands and future generations.”

Eleanor Garty, Outreach Manager for the Woodland Trust, said they hoped that their decision to fund the project for one year would provide “one small ray of light in a gloomy situation”.

She explained: “The reason the Woodland Trust stepped in is that it’s a fantastic project but really because Point and Sandwick Trust has led the way with the project. They’ve been a key part of making it happen, both with their funding and their enthusiasm for it, and Viv’s work has just been tremendous and is producing great results.

“From our point of view, we didn’t want that to fold. We wanted to build on all the great work that has been done so far. When you get impetus going with a project, it develops its own momentum and if you stop then it takes longer to pick things up again.

“We’re able to bring money to support Point and Sandwick Trust for now and at other times they’ve been able to support us.”

Project Officer Viv, who works out of the Point and Sandwick Trust office in the Old Knock School sometimes but has been working remotely from her home in Berneray since lockdown, said she was “vastly relieved” by the Woodland Trust’s intervention.

Since the project was launched in March 2016, Viv has been assisting islanders to make funding applications to grant schemes – the Scottish Rural Development Programme's Forestry Grant scheme and the Woodland Trust’s MOREwoods scheme – and then providing the practical help in terms of selecting trees and how to plant and look after them.

At the end of last season the total number of trees planted was 91,425, slightly short of the 100,000 target by 2020 due to the impacts of lockdown, particularly the closure of nurseries.

However, that milestone will be passed soon, with a projected 142,245 trees in the ground under the project by 2021.

Viv said the cable failure had been “devastating” and said the Woodland Trust’s action “shows the benefit of partnership working.” Without this intervention, she said, “lots of people would miss out on the opportunity of planting the trees."

This season, the project is on track to plant around 50,000 trees between October and April. There will be 24 of the MOREwoods schemes and eight of the larger Forestry Grant ones.

They are being planted right throughout the islands, from Barra to Lewis.

If work had not continued, two new island nurseries – Stark’s Ark in Leurbost, and Hebridean Trees in Manish – would have been impacted by the drop in demand for local trees for the project and there are fears they would have struggled to sell their stock.