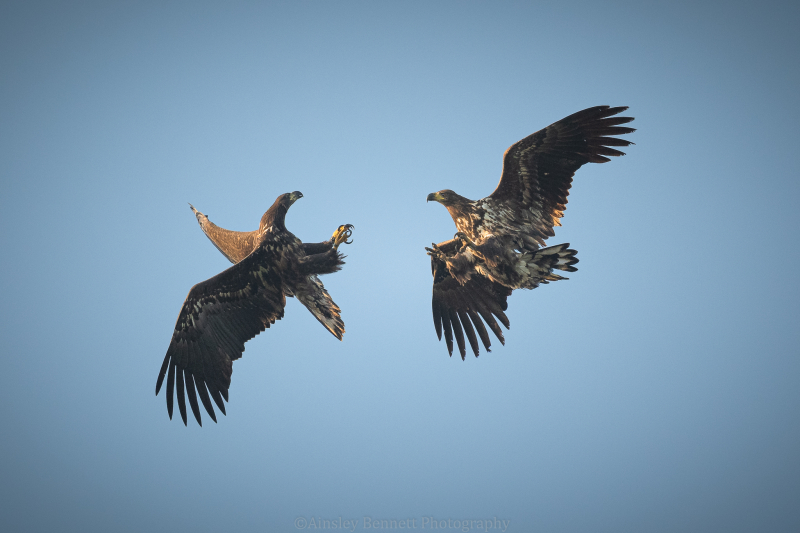 A pair of young sea eagles from the Pairc Estate are reported to be thriving in the Isle of Wight, after being successfully transported as part of a wildlife reintroduction scheme.

In a report to the Pairc Trust last week (Friday 13 November), Robin Reid of the RSPB’s Lewis and Harris raptor study group gave details of the success of an eagle relocation project which began during lockdown this summer.

Robin said: “The Pairc peninsula, including Pairc Trust Estate and Eisgein Estate, has become one of Scotland’s strongholds for the white-tailed eagle, or sea eagle as it is commonly known.

“We know from historical accounts that this area was also a stronghold for the species in the past, but around 100 years ago the last pair on Lewis were shot at the Shiant Isles and shortly after that the species became extinct in Scotland.

“Sea eagles re-established themselves on Lewis after a successful re-introduction project which saw the release of young from Norwegian nests.

“Over the 45 years since the first birds were released on Rum, sea eagles have re-colonised most of Western Scotland and the population is now faring well, with approximately 30 pairs now breeding across Lewis and Harris and a further 15 pairs on the Uists. 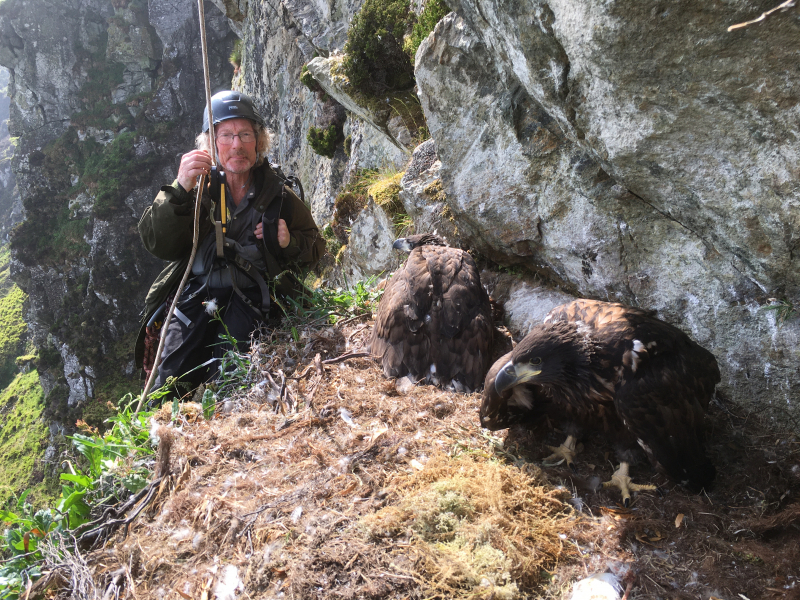 “The numerous sea lochs, indented coastline, abundance of seabirds and undisturbed nest sites on the Pairc peninsula are likely to be the main factors that make this area so attractive to the species.

“From historical documentation and place names it is known that the sea eagle were once much more widespread across Scotland, England and Ireland and, in 2019, an ambitious new project to re-introduce the sea eagle to the south coast of England commenced.

“This time, rather than bringing young sea eagles from Norway, a license was granted to source young from the Scottish population. The license allows for single chicks to be taken from broods of two.

“Four suitable nests were located on Lewis, two of which were on the Pairc Trust Estate, and four chicks were collected in mid-June. They were transported by ferry, road and plane to the Isle of Wight, where they joined five other chicks from other Scottish nests.

“The four Lewis birds were released on 30 July and settled well into their new surroundings. They are each fitted with a satellite tag which allows their movements to be monitored.

“One of the young, from a nest near Gravir, made its first exploratory flight at the end of September, flying to Hampshire on 30 September and then Berkshire by 6 October, roosting near Heathrow airport. It then spent a few days in Sussex before returning to the Isle of Wight on 13 October.

“These youngsters will spend several years exploring their surroundings and gaining experience before they settle to breed from four to five years of age.

“The project is very grateful to the Pairc Trust for providing permission for chicks to be translocated to the Isle of Wight from the estate and it is exciting that these birds will hopefully go on to establish a thriving sea eagle population in southern England.”

The pictures show a sea eagle chick being collected from nest on the Pairc Estate (RSPB/Robin Reid) and one of the Pairc sea eagles interacting with a 2019-released bird over the Isle of Wight this summer (Ainsley Bennett).