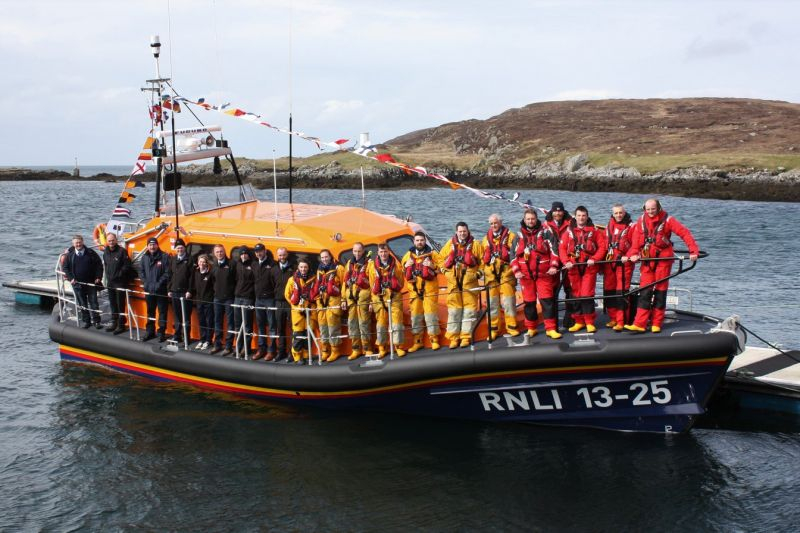 The RNLI station and lifeboat which the community of South Harris fought for years to gain is in danger of closure.

Leverburgh RNLI lifeboat station was launched in 2012 after a huge campaign by local fundraisers. Despite 97 ‘shouts’ over its eight years in service, in which 87 people were assisted, Leverbugh RNLI Lifeboat has not registered any lives as saved and has been out of action due to volunteer shortages for a full year.

It is one of three RNLI stations covering the Western Isles – together with Stornoway in the north and Barra in the south – and has been involved in calls including to transport members of Tarbert Coastguard Rescue Team to St Kilda during the rescue of a walker who fell on a clifftop in summer 2018.

The arrival of a permanent vessel, the Shannon-class Stella and Humfrey Berkely in April 2018, was described at the time by lifeboat operations manager (LOM) Chris Ross as: “a momentous occasion in the history of our village.”

But Chris retired from his post as LOM in October 2019, since when the lifeboat has not been fully operational. The RNLI now says it is unlikely to return from its scheduled annual maintenance visit to Inverness but will stay there in a state of well-maintained readiness until the future of Leverburgh lifeboat station is decided.

A local consultation has begun to address volunteer shortages and other issues around Leverburgh’s RNLI station, but there’s already a campaign in Lochmaddy to site a lifeboat there if the South Harris station has to close.

A statement from the RNLI yesterday (Saturday 21 November) said: “We're consulting with our volunteers about the future of the station given the issues we have around sustainability.

“In September we began a consultation process with our volunteers in Leverburgh about the future of our lifeboat service in South Harris. The consultation followed significant periods of 'off-service' for the lifeboat during 2019, due to a lack of operational and trained personnel.

“The lifeboat has been off-service since November 2019. The situation, whilst not caused by, has been impacted and compounded by the COVID-19 pandemic.

“The consultation process enables the important views of the RNLI Leverburgh volunteers to be considered as well as providing a local context to the data from those who deliver the service in South Harris.

“We have faced challenges since the establishment of the station, particularly around maintaining sufficient numbers of trained and available crew. We have committed significant investment of time and resource to the station, but these efforts have, unfortunately, not eased the situation.

“We also face the realities of official government estimates that continue to project a declining and ageing population, which places increased demands on a limited number of volunteers.

“The challenge we all have now, and what we've asked the station volunteers to feed back to us on, is ensuring that we have a lifesaving asset that can be crewed now and sustainably into the future.

“Wherever a lifeboat is stationed around the coastline of the UK and Ireland, we have a responsibility to make sure that we are effective as a lifesaving service and available for the majority of the time.

“As a lifesaving organisation and charity, we will always act with the best interests of our volunteers and our donors in mind, we can do this by ensuring the effectiveness of our service and fulfilling our primary purpose of being able to respond when called.

“During this time, as throughout the past year, the area will be well served by our stations in Stornoway, Barra, Portree and Lochinver as well as by our colleagues in the Coastguard, including the rescue helicopter based in Stornoway.

“We will continue to work with our volunteers in Leverburgh in order to reach a decision about the sustainability of the RNLI's presence in South Harris.”

A social media campaign launched tonight (Sunday 22 November) is asking for volunteers in North Uist to put their names forward, to show that Lochmaddy has the numbers for potential RNLI volunteers.

Discussion is also expected as to whether a new station should be sited on the west side of Lewis, where a larger population including more people of working age might allow a regular service to cover the seas to the west of Lewis and Harris.

The picture shows the crew of the RNLI lifeboat prior to the loss of volunteer numbers which has put the station out of action.