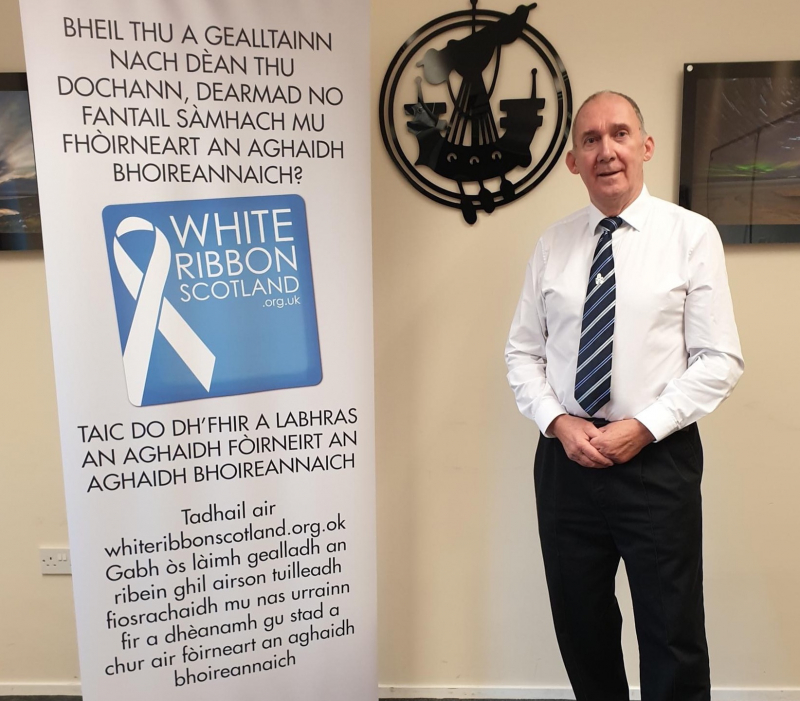 Councillor Norman Macdonald, Convener of Comhairle nan Eilean Siar, and Gordon Jamieson, chief executive of NHS Western Isles, have both publicly joined in a 16-day long islands-wide campaign against domestic violence – which is using publicity in both English and Gaelic.

Inspector Jane Nicolson, who chairs the local group said: “Everyone has the right to live free from fear, intimidation and abuse, especially within their own home.  Within the Western Isles, we are using the 16 days of action as an opportunity to raise awareness of the support available for victims and survivors of domestic abuse.”

The launch took place on Wednesday November 25, which was also White Ribbon Day, an international campaign encouraging people to wear a white ribbon and undertake never to commit, excuse or remain silent about male violence against women. 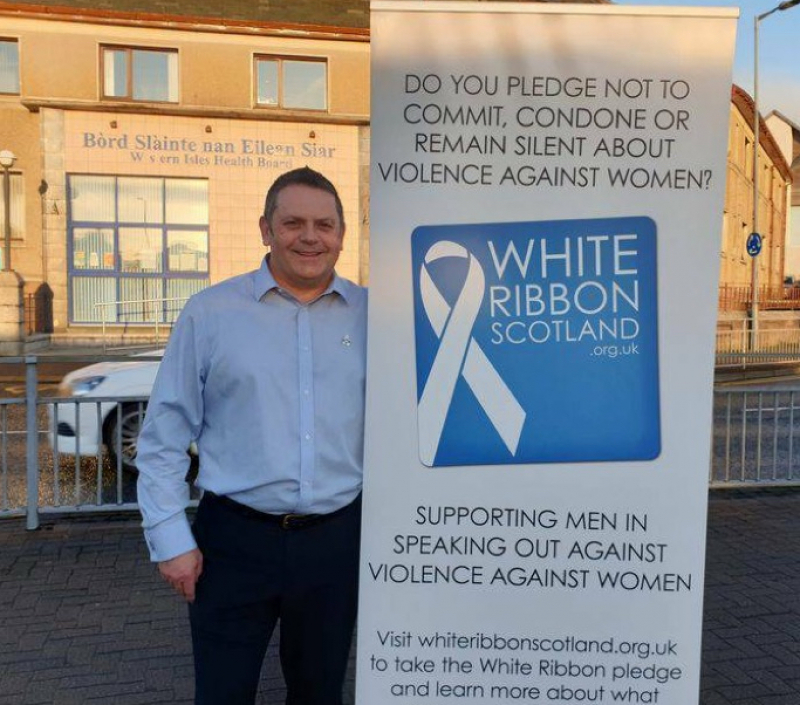 The Western’s Isles quest is to gain White Ribbon status for the islands, ensuring that those goals are embedded in every part of community life.

In Scotland, the campaign includes inviting people to sign a pledge never to condone, commit or ignore evidence of violence against women. Councillor Macdonald and Mr Jamieson both signed the pledge. More information is at https://www.whiteribbonscotland.org.uk

Inspector Nicolson said: “White Ribbon Scotland involves men taking steps to eliminate violence against women and educates about what (people) can do to play their part during the course of their everyday lives.

“From the top down and the bottom up, engagement with White Ribbon Scotland’s grassroots campaign will reinforce the feeling of living, working and leading in an area which will not ignore violence against women or its causes.”

White Ribbon status has already been granted to Angus, Glasgow and Dumfries and Galloway following similar campaigns in previous years.

Inspector Nicolson said: “I would like to thank the partner agencies and other groups involved for their help to get the campaign up and running, especially Davy Thompson, campaign director of White Ribbon Scotland, who were so helpful and for the first time have produced the banners in Gaelic for use in the Western Isles.

“Domestic abuse is such an important subject and I urge anyone concerned that someone may be at risk or suffering domestic abuse – whether a family member, friend or neighbour – to please contact Police Scotland or our partner agencies for help. Help us to keep people safe and reduce domestic violence.”

To report abuse, contact 101, or 999 in an emergency, to report it to police. If you have concerns about a victim of domestic abuse you can also help protect them by speaking to police in person or using the online reporting form on the Police Scotland website (https://www.scotland.police.uk/secureforms/c3/)