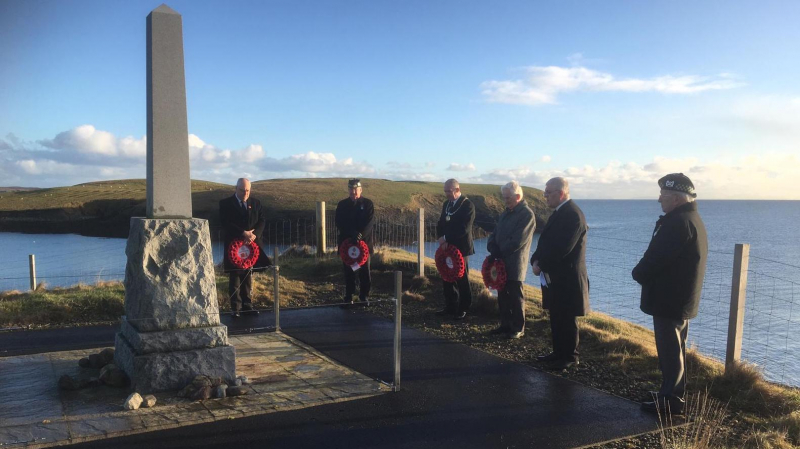 Yesterday (January 1, 2021) at 1pm, a short service was held under Level 3 Covid-19 restrictions at the HMY Iolaire memorial in Holm to commemorate 102 years since the disaster on 1 January 1919.

The vessel foundered on rocks of the Beasts of Holm just off that shore in heavy seas on a pitch-black night.

Of the 280 men on board, mostly members of the Royal Naval Reserve and many of whom had survived several years in the nightmare of the First World War, only 79 survived.

Those lost included crew members from throughout the UK as well as the many men who were returning to their loved ones on the Isles of Lewis, Harris and Berneray.

Involved in yesterday’s wreath-laying event were Comhairle nan Eilean Siar Convener, Councillor Norman A Macdonald, who laid a wreath on behalf of the community; Donnie Maciver of The Royal British Legion Scotland; Lord Lieutenant of the Western Isles Donald Martin, who laid a wreath on behalf of Her Majesty the Queen; and Malcolm Burr, chief executive of Comhairle nan Eilean Siar. Parade commander for the event was Mr Francis Jefferson of the British Legion.

Offering prayers and a Bible reading as well as a short reflection was the Rev Paul Amhed (Church of Scotland) latterly serving at Barvas and current locum at Garrabost.

Mr Martin, seen above while laying Her Majesty's wreath, gave a short address recalling the tragedy. “Thank you for joining us this morning and for the opportunity to pay tribute, remember and express our gratitude to those who lost their lives on that fateful night 102 years ago today when the Iolaire struck the Beasts of Holm, just a few 100 yards away from this very spot.

“Those who lost their lives that night – 201 of them - and the 79 who survived, and all their families will always have a special place in the hearts and thoughts of our Island communities.

“We all remember the poignant centenary commemoration service which we had the privilege to attend along with HRH The Lord of the Isles and the First Minister on 1 Jan 2019 and which along with many associated memorable events leading up to the service, gave our communities the opportunity to express their own tributes to the generation that was so cruelly lost to the islands on that January morning.

“By our limited presence here today because of the prevailing circumstances, we are the few representing the many, to ensure that our communities acknowledge and remember the service, sacrifice and courage of those who so tragically lost their lives on their home shore as they made their last journey back to their families after serving King and country.  We remember again The Darkest Dawn.

A similar small scale event was held on the same day at the War Memorial in Tarbert.