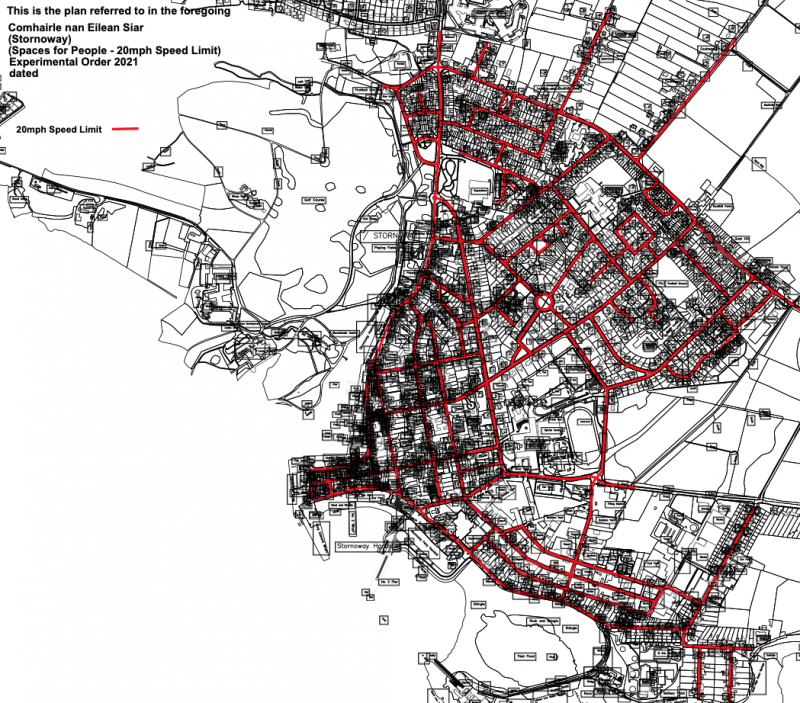 Opinions are divided about the benefits and inconveniences of a proposed 20mph speed limit over most roads in Stornoway town centre, as Comhairle nan Eilean Siar today (Thursday 14 January) added three days onto a public consultation period.

Reduced speed limits have been proposed for Stornoway, Tarbert, Balivanich and Castlebay in line with Scottish Government moves to make walking, cycling or wheeling easier for people during the Covid-19 pandemic.

The changes include an extensive series of new temporary 20mph speed limits in and around Stornoway town centre, to be in place for an initial 12 months, with a review then to be held on making the restrictions permanent.

The deadline for comments on the plan has now been extended to 2pm on Monday 18 January.

The proposals have drawn a mixed response from Stornoway residents commenting on the welovestornoway.com facebook page at https://www.facebook.com/welovestornoway

While some dispute the value of such blanket proposals on town centre speeds, describing it as ‘traffic mismanagement’, others applaud the idea of reducing speeds, calling the proposed speed cuts ‘fantastic’ and hoping that they will also reduce nuisance driving.

Vehicle emissions, delays to deliveries and driver frustration are all given as possible drawbacks of the proposals.

One respondent said: “Isn’t this 20mph all over Stornoway going to cause traffic congestion and delay for delivery vans, buses etc?” Others said: “Completely regressive, cars moving in lower gears to maintain speed will (have a) higher output of emissions” and “This means most vehicles will have to run in third gear at the most, burning more fuel and adding to pollution.”

But cyclists seem to broadly welcome the idea. One said: “Hate cycling in town (because) you feel you are holding up traffic. Won’t be the case now and (I) can see more and more cyclists taking to the roads. 20’s plenty in town.”

Fears of queues building up are, to some, insignificant beside the safety benefits, with one commentator quoting accident survival figures. She said: “At 20mph, there’s a 95% chance you’re going to survive being hit by a car. At 30mph, those odds drop to 55%”.

A proposed compromise position is put forward by one welovestornoway.com reader, who said: “General 20mph while retaining 30mph on key routes (such as) Sandwick Road, Matheson Road, Perceval Road and Goathill Road.”

The Comhairle’s statement of reasons for the order, which was placed on their website under ‘traffic regulation orders’ on 16 December, says that the changes are: “in the interests of road safety in line with the ambitions of the national Spaces for People Programme.”

Spaces for People is a temporary infrastructure programme which offers funding and support to make it easier and safer for people who choose to walk, cycle or wheel for essential exercise during the COVID-19 pandemic. This is funded by the Scottish Government and managed by Sustrans Scotland.

Anyone wishing to object to the proposed orders should send details in writing, either by email to This email address is being protected from spambots. You need JavaScript enabled to view it. or in hard copy to the Chief Executive, Comhairle nan Eilean Siar, Council Offices, Sandwick Road, Stornoway, HS1 2BW to be received no later than 2pm, Monday 18 January 2021.

Objections should state the full name and address of the objector, the order to which they relate and the grounds on which they are made.