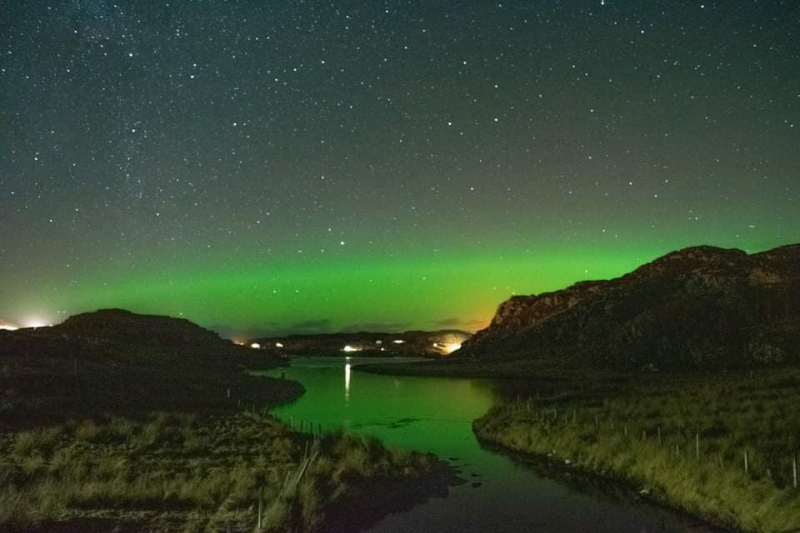 Among the winning entries announced last week in the festival’s photography competition were three striking images of the aurora over the islands, now complemented by a clutch of new snaps taken in the icy clarity of Wednesday 3 February. 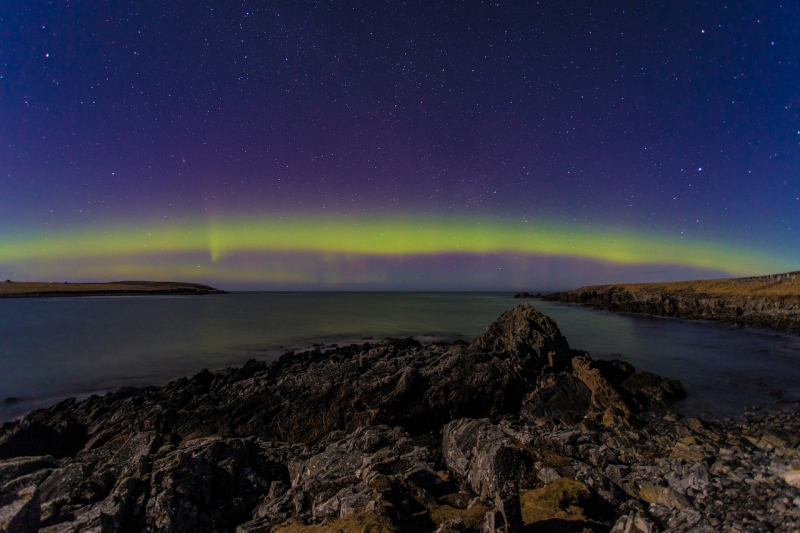 Aurora images by Derek MacKinnon, above; Grant Anderson and Gordon Macdonald join other striking night photography by Chris Murray, seen below; and Alejandro Basterrechea, second below, on show at An Lanntair from Saturday (6 February) until 27 March. 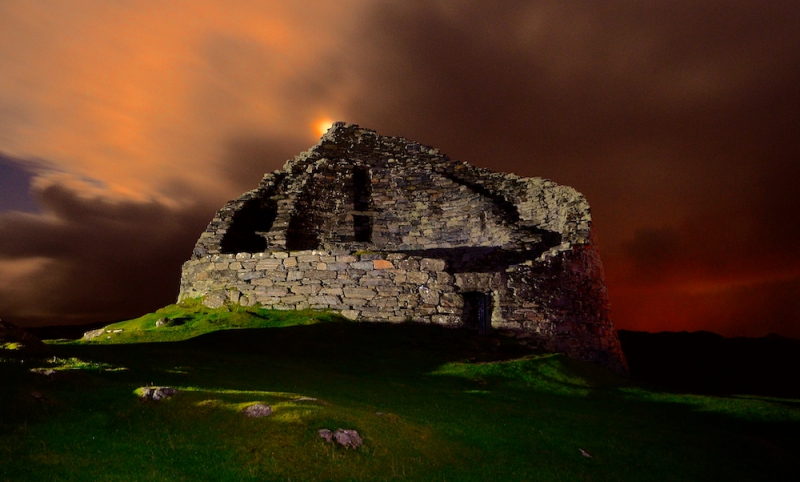 The Hebridean Dark Skies Festival takes place against some of most extraordinary dark skies in the whole of the UK, with breath-taking scenery to match.

In winter, astronomical sights can be seen through the naked eye including the Orion nebula (over 1,500 light years away), the milky way, the Great Andromeda galaxy and, of course, the northern lights, Aurora Borealis. 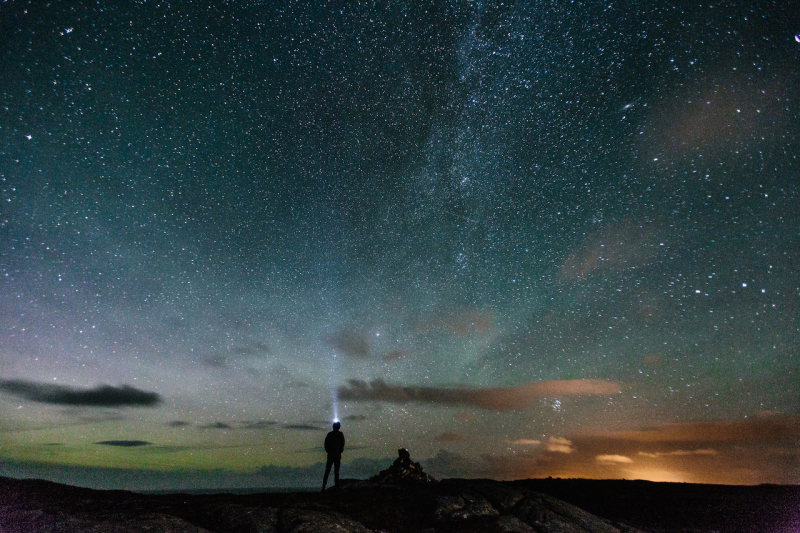 (Photo above by Grant Anderson)

The Western Isles is one of the very best spots in the UK for watching this incredible phenomenon, with low light pollution and the celebrated ‘big skies’ which allow people to see the merry dancers even from relatively populated areas.

Last night the hardy were out on their back doorsteps catching shots of the aurora ‘live’ at home – as pictured here by Carol Ferguson, immediately below, in Tong: Dell-licious-Ness and Paul Chamberlain in Tolsta Chaolais. 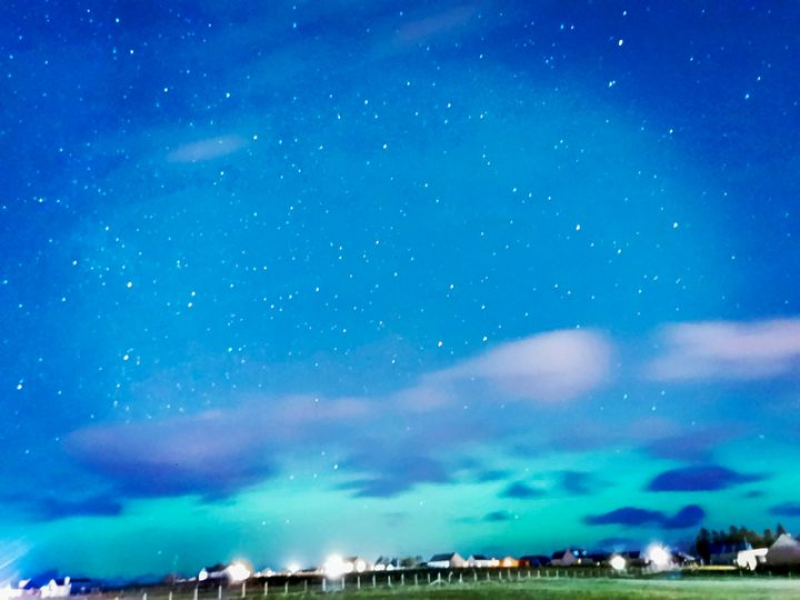 The aurora photographers whose earlier images (pictured) made the Dark Skies festival winning five were: 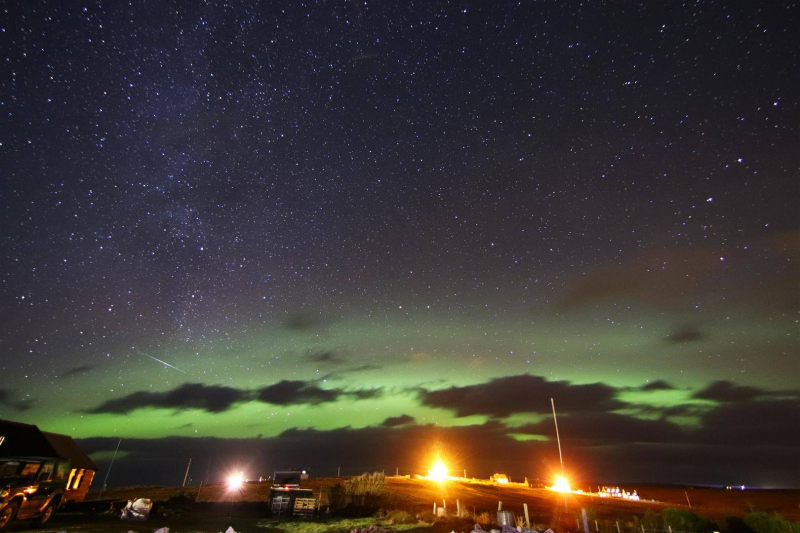 Derek Mackinnon – aurora over Bragar shore: “I wanted to try and get as far on the west side of the island so I wouldn't have anything to block the view of the aurora. I spotted it from Sandwick and decided to drive over, past midnight, to see if it would still be visible. Thankfully it was and had a lovely arc to it.” 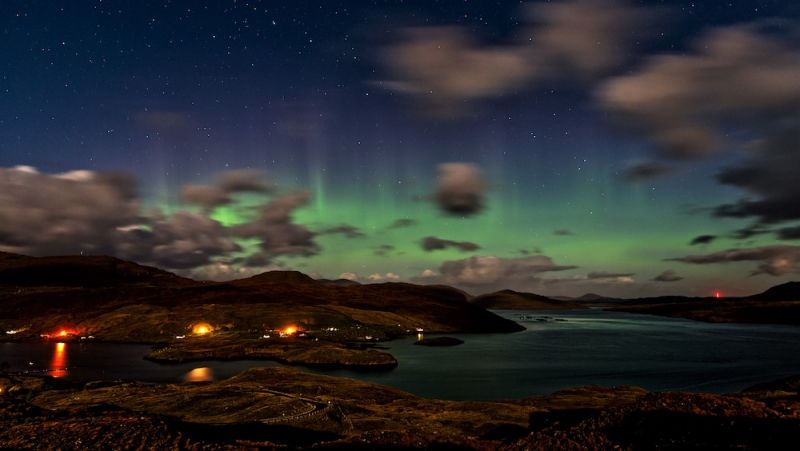 Gordon Macdonald – aurora spiking above Maraig and Loch Seaforth, North Harris, seen above : “This was a very lively display of the northern lights in September 2020, with regular bursts of intense activity visible to the naked eye, but the almost full moon created difficult shooting conditions and a slightly surreal landscape of contrasting highlights and shadows.”

Grant Anderson – Gearrannan, Isle of Lewis: “We'd had a particularly energetic crossing from the mainland as we chased the waves from a large surge from the Atlantic. We were lucky, as the main body of the storm passed the weather cleared to offer up a dizzyingly clear autumn night sky and a faint aurora in the distance.”

The Hebridean Dark Skies Festival is now in its third year, with an online programme including talks by TV presenter Dallas Campbell, climate scientist Tamsin Edwards and astronomer Stephen Mackintosh (Highland Astronomy), plus workshops by the Lumen artist collective and Lewis-based artist Mairi Gillies, and a newly commissioned piece of music by sound artist Renzo Spiteri.

Festival programmer Andrew Eaton-Lewis said: "While we hoped that lockdown rules would have eased by February, we always had contingency plans in place in case a festival of live events proved to be impossible."