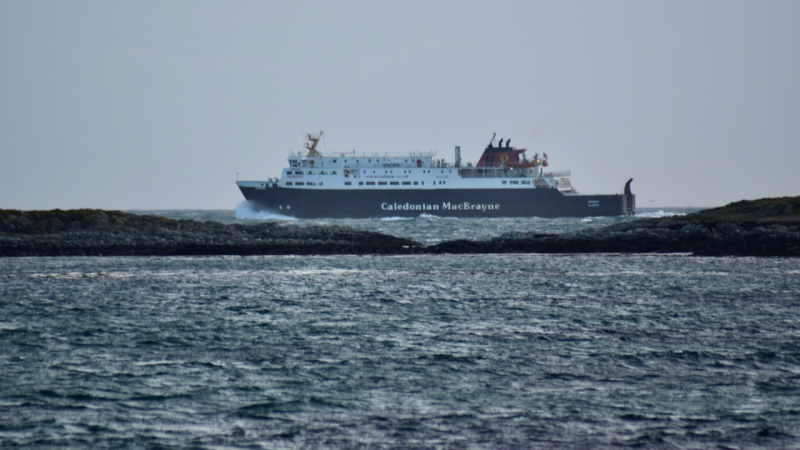 The Isle of Barra will have to wait another day before their regular ferry service is restored, with MV Isle of Lewis now (11am, Tuesday 23 February) sheltering from the storm in Stornoway harbour.

After completing sea trials in the North Sea off Aberdeen late last night, the ferry made her way north past Peterhead and up to the Pentland Firth, before heading west and then south into the Minch.

Around 9.30am today she made a smart turn and sought safe haven from gale force winds in Stornoway.

A CalMac spokesman said: “It was always the plan that she would wait out the storm in Stornoway.”

The weather station in Castlebay reported a gust of 74mph at 3.30am. Since then its been reporting gusts around 58-67mph all morning & afternoon. Gusts 45-55mph will continue today & tonight & Wednesday peak gusts reaching 60mph. Rest of the week looking more settled though. According to @Barra_weather

The Isle of Lewis’s return to service on the Castlebay Oban route will – it must be hoped – return some semblance of normality to Barra's island life. 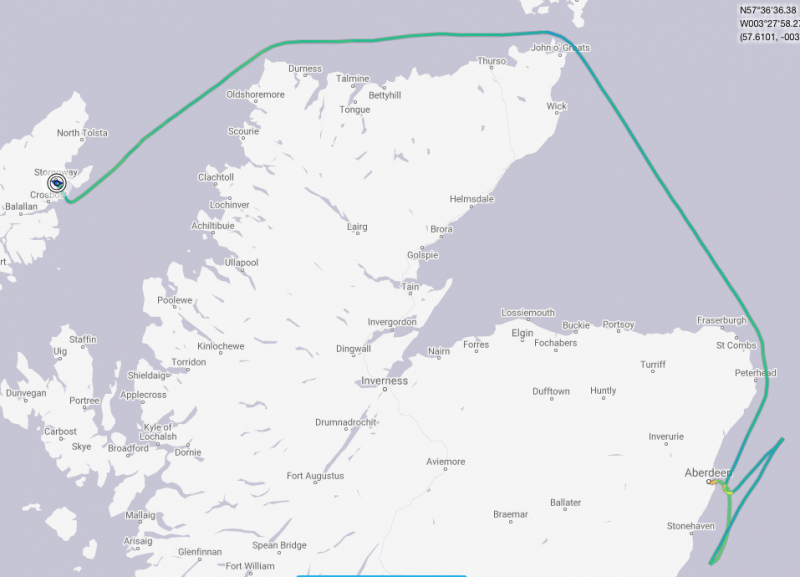 Sea trials off Aberdeen…then a dash to Stornoway before the storm came in.

The Isle of Lewis is now berthed opposite MV Isle of Arran, which limped in looking for shelter and engineer support, with a failing main propulsion system, yesterday afternoon (Monday) – depriving Lochboisdale of the temporary service she was providing there.

The skipper of that vessel was obliged to divert to Uig in Skye yesterday afternoon, diverting from the intended route between Lochboisdale and Oban and leaving passengers and freight with a long diversion to complete their journey.

Latest to weigh into the barrage of criticism of the fleet, the annual service timetable and the rebuilding programme for new vessels are Uist and Barra independent councillors, who posted on social media yesterday evening (Monday 22 February).

They said: “Once again the lack of vessels operating across the CalMac network has left Uist and Barra without an adequate ferry service.

“The annual overhaul schedule leaves an already threadbare fleet creaking at the seams and with ageing vessels the number of emergent issues seems to be increasing considerably.

“The service to Barra has simply been unacceptable. One sailing in nine days stretched the terminology of it being a ‘lifeline service’.

“The problems just seem to be getting moved around the network. The system is at breaking point, if it’s not already broken. Vessels suitable to crossing the Minch need to be on those routes, not the 37-year-old Isle of Arran, or the 35-year-old Hebridean Isles.

“There needs to be more ferries. They needed to be built 10-15 years ago, they need to be in the system now but they’re not. The Government, in consultation with the community, need to get moving with their plans now, so that a rolling vessel replacement strategy sorts out these problems sooner rather than later.”

The opinion is shared in Harris, where customers seeking to travel or to move freight from Tarbert are being told that there will next be a review on Friday (26 February) with a view to restoring their service on Saturday. That will take them to seven days without service.

The regular Uig triangle service vessel, MV Hebrides, originally scheduled either to serve Tarbert or to lend a hand for Barra, was instead making a lifeline link to Tiree.

Blogger Life in Tiree welcomed the weather window which allowed MV Hebrides to reach them from Oban. Writing on Saturday (20 February), the blogger said: “Since last Monday Tiree has not had a ferry from the mainland port of Oban, or for that matter anywhere else.

“Prior to that there had been no ferry berth since the previous Tuesday. On one occasion the ferry turned back out in the passage of Tiree without attempting to berth. Understandably the cupboard was almost bare.”

The joy of a ferry arriving on an isolated island is shown by a frame-by-frame coverage on Life in Tiree of the approach of the MV Hebrides to their quay.

Meanwhile out in Tiree the news was just as grim this afternoon. "Not unexpectedly the ‘MV Hebrides’ returned to the Mainland port of Oban without berthing at either Coll or Tiree. CalMac issued a statement at 14:16 stating that, due to adverse weather conditions the MV Hebrides did not berth in either Coll or Tiree and is currently returning back to Oban with an ETA of approximately 17:00." Reported Life in Tiree.