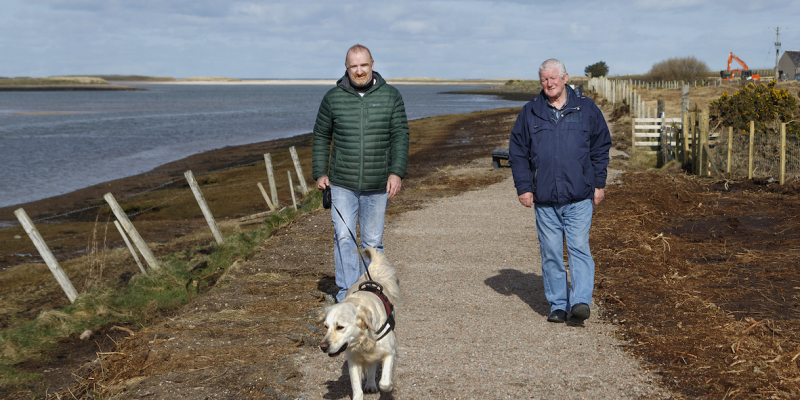 Path is a route to success

Completion of the first phase of the coastal path around Steinish has been warmly welcomed, with walkers already making good use of the new disabled-access walkway.

Works were completed in late March, ahead of the equinoctial Spring tides, which saw the sea level rise up close to the level of the new path on the outskirts of Stornoway.

The new path starts from Simon’s Road, between Plasterfield and Steinish, near the entrance to the Auction Mart, and heads down towards the sea and along the shore – where there is a designated SSSI (Special Site of Scientific Interest) area and sinking sands – towards the Steinish Road end. 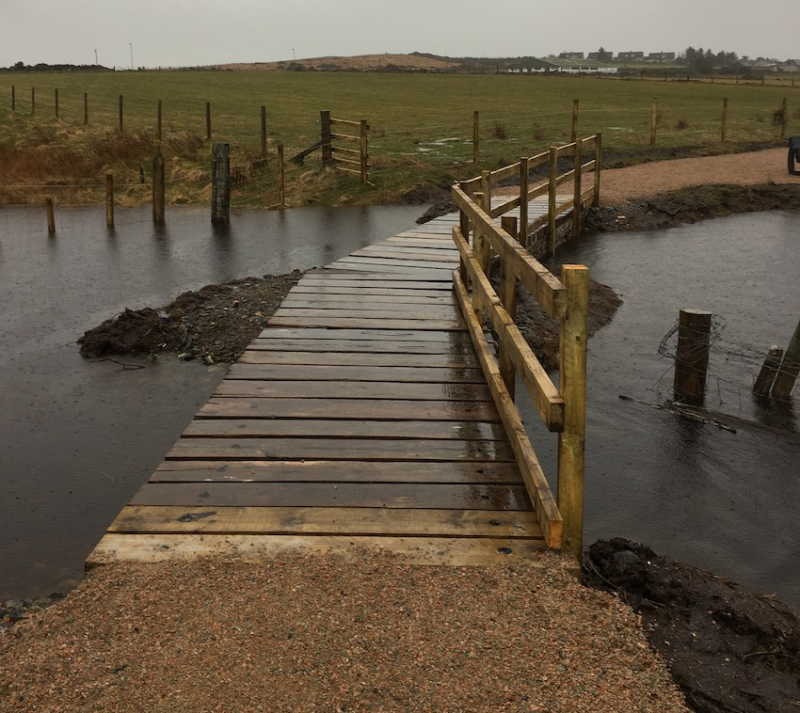 Its 850 metres long and 1.2 metres wide, with wider areas for passing and resting, and has a chipped surface that allows for easy wheelchair and buggy access. A bridge made of recycled greenheart wood – taken from old piers – has been installed in the middle of it and six benches made of recycled plastic have also been put in place.

The work was made possible after Mossend Residents Association secured more than £42,000 from the Crown Estate Coastal Communities Fund.

A second phase is planned, which will involve extending the track around the shore side of Steinish village and up around the far side of the village to near the airport. Funding is also in place for that, although there are no start dates yet for that phase of the work.

For now, though, Michael Smith and Duncan Mackay from Mossend Residents Association were happy to take a turn along the new path – along with Michael’s dog, Molly – for the cameras.

Michael, who is also on Steinish Community Development Trust, undertook much of the background work required to get the project to the planning stage – and said the end result was “great”.

“The path is brilliant. It seems to be well used already and most people in the village think it’s really good. Once the second bit is done, my daughter was saying that it will be brilliant for summer running. You will be able to go all the way round.”

Michael said people have been walking this route for 20 years but it was now much more easy underfoot. “It’s a really nice coastal path, easy walking or cycling distance from the town and then you are into a nice undeveloped area on the coast, with a SSSI right beside you. It’s a really good path to have, so close to Stornoway, for people who want to go for a wee walk and clear the head.” 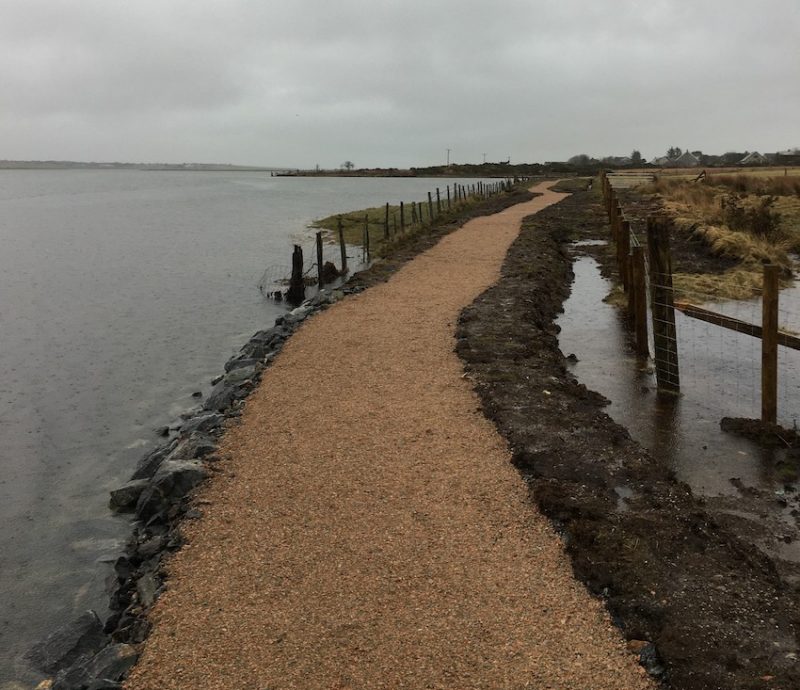 Duncan Mackay, who is chair of Mossend Residents Association and the local Fideach Angling Club, said: “It’s very well done. It’s an excellent path and even in the short period we were there – about 15 minutes – a total of eight people passed us on that path and all were complimentary about it. That included a couple of young girls with prams, so that saved them going on the road. They can walk along this path, safe as houses. It’s very scenic and it’s tidied the place up. It’s been a long haul to get here but it’s a good thing and when it’s extended it will be better still.

“We fish the Steinish pool from April through to October and it’s amazing, the amount of people who walk along the shoreline. With the path there, it will make a world of a difference.”

The area is well known for its bird life and the Steinish path project has been supported by Scottish Natural Heritage. In the summer, Arctic Terns nest and other visitors include Skylark, Shelduck, Oystercatchers, Ringed Plover, migrating waders, ducks and geese. Salmon and sea trout can be found in the estuary waters.

As well as allowing completion of the Steinish Circular Coastal Trail, that money will also support the installation of benches along the whole of the Point and Sandwick Coastal Community Path – a 40km route around the Point peninsula, that will form part of the legacy of Point and Sandwick Trust, as one of the key funders. 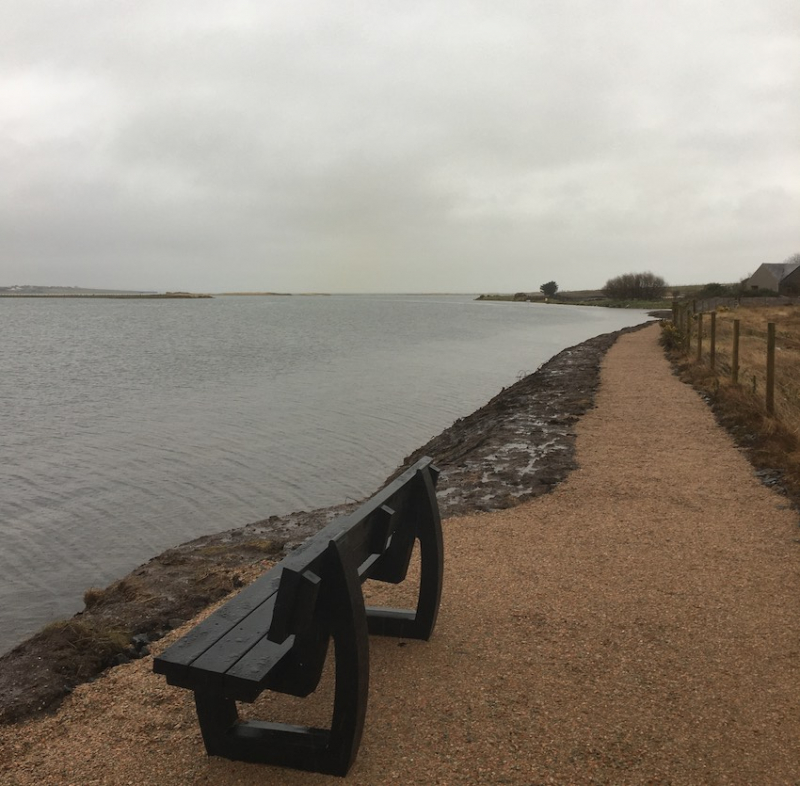 Point and Sandwick Trust’s community engineering consultant Tony Robson has had a technical role in developing these paths and welcomed the finished result at Steinish. He said the path was a similar standard to the new 100 metre section alongside Eaglais na h-Aoidhe, created as part of the first phase of the Point and Sandwick Coastal Community Path.

Tony said: “It has been useful for us because it’s enabled us to develop a method of working that works and we now know how much it costs and we know that people like the path. We will hopefully be doing a lot more of a similar standard, towards Point and Sandwick. It’s like a benchmark.”

Grass seed will be sown and wild flowers planted in order to landscape the path borders.

Images of the new path at Steinish during the equinoctial Spring tides, taken by Tony Robson, and other pictures by Sandie Maciver of SandiePhotos

Top, from left to right, Michael Smith, Molly the dog and Duncan Mackay