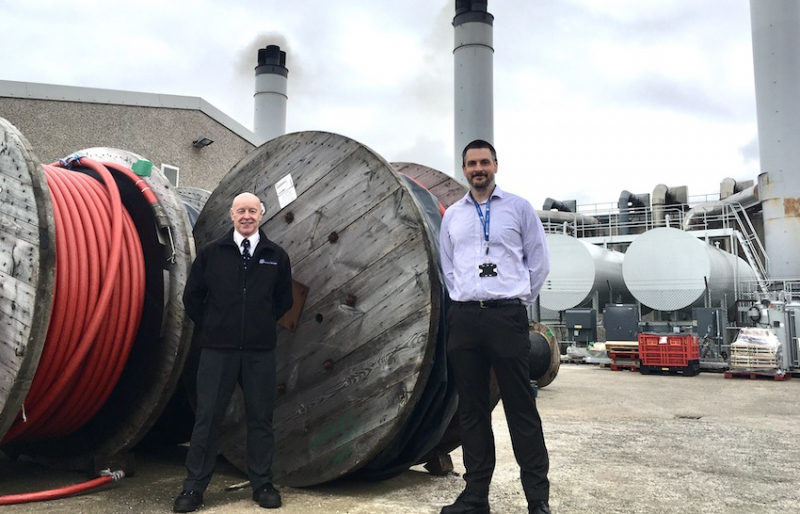 A gradual process of power transfer has started at Battery Point Power Station in Stornoway, as a once-in-a-generation change of management begins for Scottish and Southern Electricity Networks.

Western Isles generation manager Donald Mackenzie will work his last day on 31 May, before retirement on 31 August, after 41 years with the power company.

This week he began the handover process to his successor, new manager Donald Macaskill, who has joined the company from Scotland Gas Networks.

Donald Mackenzie joined the North of Scotland Hydro-Electric Board, as it was then called, on 1 September 1980 after taking a degree in electrical engineering at Glasgow University.

It wasn’t his first career choice, he admits: “I wanted to be a pilot in the RAF and was in the air cadets, but when I went to Biggin Hill for the selection process I failed the medical because of my eyesight, and they suggested I take an engineering degree so that I could work as ground crew.”

It was during his degree that Donald came to realise that he wouldn’t be content working alongside the aircraft he had hoped to fly. He also had the chance to join a graduate placement scheme that gave him several weeks working for various potential employers.

Donald said: “My first placement was with the Hydro and I loved it. I was out in all weathers, up poles and working on the systems.”

After a short time moving around the company he was made a third engineer, working on the installation and pricing up of new electricity supplies to domestic and small industrial properties.

Then he heard of an engineer’s post coming up in Stornoway, and in 1982 he moved across to the Western Isles. He has never left.

“I was from an island myself, having been born in Arran, and during my time at university I had met a lot of people from the Western Isles, so I immediately felt at home.”

Quickly settling in, Donald became a team manager and then, when Scottish Hydro merged with Southern Electric to become SSE, he became Western Isles manager as part of a larger, mainland-based management team.

Since then there’s been more restructuring and in 2011 the generating power stations of the Western Isles, Tiree and Islay became a group called the embedded generation group, with Donald as generation manager Western Isles.

On the ground over those years, Donald has seen some big physical changes. He said: “The biggest moment was in 1991 when the power stations stopped generating power 24 hours a day, because we had been connected to the mainland grid by the new subsea cable.

“Two years of infrastructure development had led up to that moment, connecting the islands and developing the overhead lines, interconnector and substation.

“I was the one who closed the switch and I was anticipating what it would be like – a big, dramatic moment when everything fell quiet. I switched on the mainland power and the power station powered down – it can be really silent in a power station when it’s not generating.”

Ironically, his retirement has come in the middle of almost the opposite situation, after the mainland cable parted on 16 October 2020 and the embedded generation system was once again called into service.

Donald said: “Initially when the power went off we just went into automatic mode – it happens from time to time and our main focus is to get the station up and running. Once you know that all the customers are back on, then you have time to say ‘next question – what’s happened?’

“Until last year, it’s always been a couple of hours or days – the fault is a burnt pole, a substation problem. This time, when we realised it was the cable, it was more ‘oh, my goodness’. But the company is very good at managing situations and have contingency plans in place, so once we knew what we were dealing with, they went into operation.”

Of course, all this happened in the midst of a pandemic, when the whole of the island-based team were learning new ways to work within an atmosphere of uncertainty about the possible spread of disease.

The pandemic has, in one way, helped Donald to ease towards retirement. He and other office-based management workers complied with government guidelines to work from home and that has helped him to step back from the day-to-day contact and social interaction around the power stations.

When Donald leaves his desk for the last time on 31 May he won’t be switching off the lights, since after all, keeping the lights on is the point of the job. For that, the control will be passed to Donald Macaskill, who is already experiencing a homecoming in more ways than one.

The new manager is a Lewis man, from Aignish in Point, who left the island aged 17 to work in Aberdeen. After a time studying environmental engineering at the University of Ulster in Belfast, and  working in energy engineering consultancy, he moved back to Lewis in 2009 with his wife Ashleigh.

“It was just good timing for us,” he said. “A job came up and the first of our three daughters was on the way. We have a croft and keep cattle and a few sheep, and this is a good place for a family to grow up.”

Moving into this new job will give him a fairly short handover period, the transition phase seeing the two Donalds working together, with the retiring manager gently steering new enquiries towards his successor so that he can gradually step away.

A big help will be Donald Macaskill’s family connection to the business – in the most literal possible way. His father, Murdo Roddy Macaskill, was storekeeper at Battery Point for many years. Donald said: “I spent a fair part of my childhood holidays and Saturdays running round the stores, back when it was acceptable to bring a child to work.

“I’ve come from one utility to another and there are a lot similarities in terms of compliance obligations, but it is a different industry, so there’s a lot of learning to be done. Of course there are also lots of new faces and names for me to remember here too, both at Battery Point, and at the other generating stations in the group.

“The Covid protocols have now changed, with offices re-arranged so that we can work safely from here at Battery Point, so I will be physically coming in to work. And it’s the best way to get to know things, by talking to people and looking around.

“It’s definitely nice to be back. I’ve only been here since Wednesday 21 April, and it’s feeling good so far, but I’ll feel more comfortable when I fully understand everything, so I can find my feet.”

When that moment comes, one Donald will power down and the new man will be in full management control. For Donald Mackenzie, there’ll be a lot to look back on after 41 years in the industry, and time to do it as he keeps an eye on his daughter’s horse, growing vegetables and spending more time on his own hobbies of genealogy and video-editing.

He said: “Throughout my time here, whenever I have been involved in anything public facing, I’ve found that people were very understanding. There were big storms in 1995-96 and again in 2005, when people were off for weeks at a time.

“But no matter how bad it got, with folk sometimes losing power for days on end, they didn’t complain or criticise us. I think above all, people know that we are doing our best and we understand what it means to be without power. We live here too, we know what it’s like.”