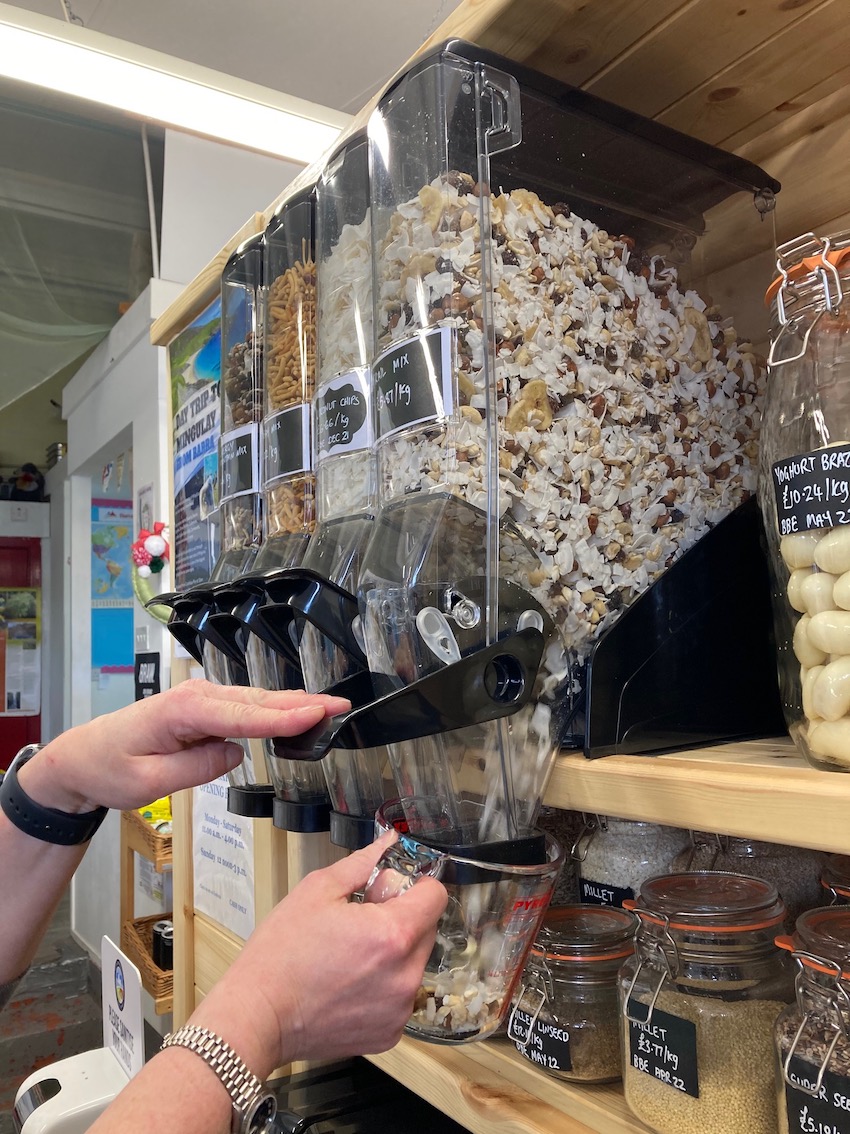 Filling up in Barra and Eriskay

The convenience, ease and sheer good value of new refilleries is catching the imagination of island shoppers, with Eriskay and Barra first to feel the effect on the way they shop for food.

Eriskay shop began to offer just five products on a ‘fill-your-own’ basis last week, while Bùth Bharraigh has a huge array of products, from spice to mix-your-own muesli, at a refillery they installed in April.

A grant from Zero Waste Scotland as part of the Scottish Government’s Islands Green Recovery Scheme gave Sarah Maclean at Bùth Bharraigh the push she needed to offer the environmentally-friendly way to shop, which sees shoppers filling their own container with their choice of foodstuffs. 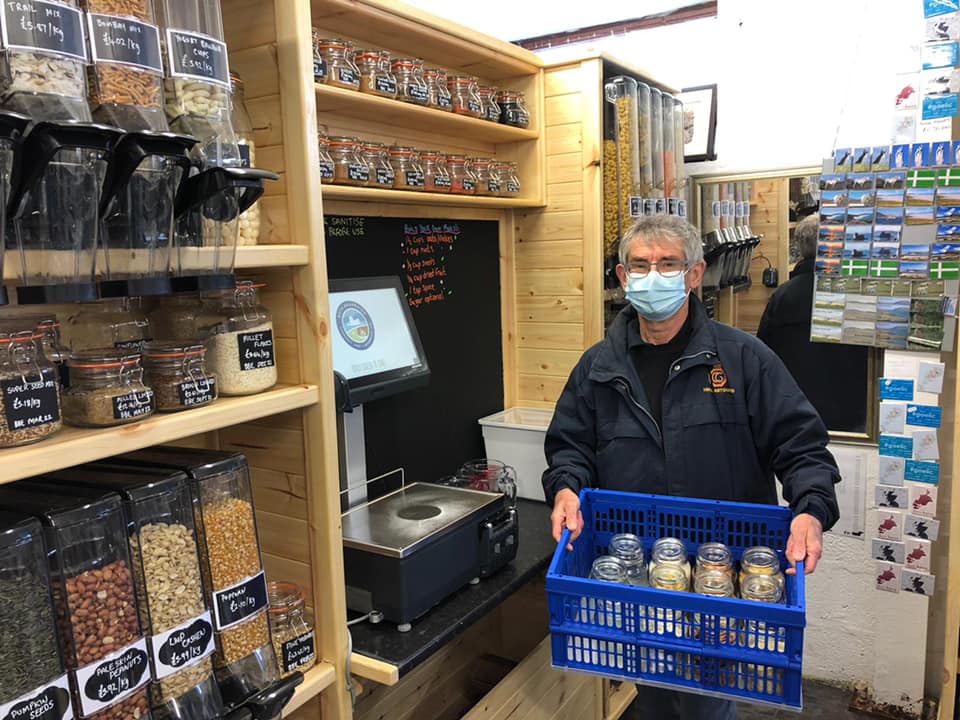 Sarah said: “We had thought about it in the past and we already sold a lot of stuff in packets from Highland Wholefoods, but the overall ambition is to cut down how much is thrown away in Barra, and this idea really hits that target.”

With the help of the grant, local carpenter Jonathan Grant created a bespoke rank of wooden fittings, which are stocked with glass jars containing dry goods to be dispensed in any quantity.

Sarah said: “You just need to buy what you want, so if you’re a single-person household, or someone travelling who doesn’t want to carry too much weight, you can just buy what you need. 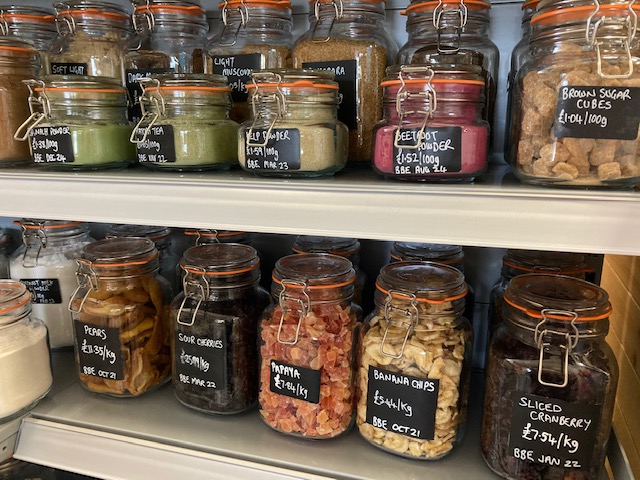 “To maintain hygiene, for the moment we are dispensing the goods ourselves, with sanitiser at the scales and a glass jug and funnel to take the goods out and put them into the customer’s jar.”

Rice, pasta and lentils have been predictably popular, but Sarah has been surprised by the way some of the more unusual products have sold. Dried fruits like sour cherries, pineapple and roasted hazelnuts have sold well, alongside various flavours of spice mix, soup and broth mixes and, of course, all grades of oatmeal. You can see the full range here https://www.buthbharraigh.co.uk/refillery

“Just because we’re out here on an island, it doesn’t mean we can’t enjoy the good stuff,” said Sarah. “I like to think people are gradually changing their habits, realising what good value these products are and getting used to the idea of buying refills rather than new packets.

“Like everyone, I have been getting my store cupboard organised with jars to put everything in, and the whole idea has been popular with campers, too. Word is spreading and we’re getting more and more people coming in.” 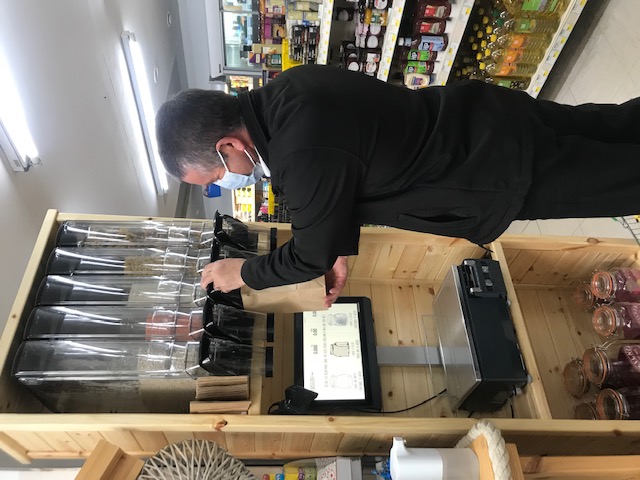 After a month in operation, Sarah was able to lend her support to Eriskay Shop, where manager Catriona Walker benefited from her advice – and the services of joiner Jonathan – to set up a mini-refillery.

Catriona said: “We just have five products – two kinds of pasta, red lentils, long-grain rice and porridge oats. Sarah is supplying us with stock from her order and we’ll see over time how people rethink their shopping.

“It looks nice, all made of wood, and our fitting has the scales built in as well. Over the past week people have been in having a look and finding out how it works.

“A few folk have asked about it, a few have tried it, now it’s just a matter of getting people to rethink and to realise that they just have to take what they need, and they’ll find it turns out cheaper as well.”

The pictures show the refilleries at Barra and at Eriskay, with Barra dentist and coastguard Robert McIntosh stocking up on his groceries (Bùth Bharraigh and Eriskay Shop).