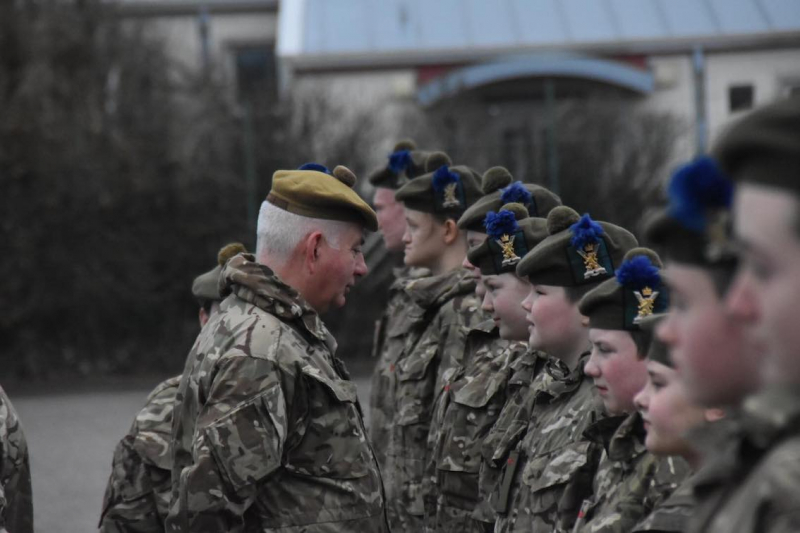 The Commanding Officer of the Western Isles Company, Army Cadet Force has been honoured for his dedicated and outstanding service to ACF movement, it’s been announced.

Major Norman Macleod was listed among those to be awarded an MBE in the Queen’s Birthday honours list, published on Saturday (12 June).

Norman has been working with cadets as part of the 1st Battalion The Highlanders Army Cadet Force (ACF) for more than 42 years.

He is described by his battalion as ‘an inspirational leader’. A spokesperson for the ACF said: “His selfless commitment, tireless energy, enthusiasm and devotion the Western Isles Company has ensured its continued development. During his decades of service, he has provided life opportunities and helped to develop many hundreds of cadets and adult volunteers.”

The announcement triggered a landslide of comments, which included accolades from former cadets and colleagues as well as personal friends.

One former cadet said: “Congratulations Major Macleod, well-deserved.  Was a big part of my life for many years both as a cadet and later a fellow-instructor.”

Another commented: “Completely deserved for all of your service to the Western Isles, 1st Battalion The Highlanders and to the ACF. I wonder how many young people have benefited over many years from your role modelling and positive influence?”

And the parents of one former cadet added their testimony, saying: “You and your team had a big influence on my son over eight years. He loved being a cadet so much he joined the army and is now a staff sergeant.”

Norman joined the Western Isles company as a cadet himself in 1973, enjoying the activity at his home detachment at Back so much that he became an instructor in 1978.

Speaking to welovestornoway.com today (Monday) he said: “There weren’t that many opportunities on the island then, and joining the Army Cadets meant the chance to attend annual camps, which are part military, part adventure training.”

Since then he’s attended 43 camps in places as far apart as Salisbury Plain, Ripon in Yorkshire and in Edinburgh. He organises and participates in drill nights and weekend camps – and he does all this alongside his day job as health and safety adviser at Lews Castle College UHI, where he started work in 1986.

Norman said: “Camps give cadets a huge opportunity to develop amongst their peers – learning fieldcraft, navigation, weapon handling and a variety of adventure training activities, thus challenging their personal development.

“One of the most rewarding aspects is to see how quickly young people can respond to the challenge. During the relatively short duration of a camp their development is significant, something that is very apparent when they participate in the final parade.”

Norman has been Officer Commanding, Western Isles Company for 30 years. Part of that role includes the production of programmes and instructions for drill nights and weekend camps, which are mainly held at MoD Hebrides Range in Benbecula.

Many cadets are able to gain St John Ambulance first aid certificates through membership of the ACF.

But he’s quick to pay tribute to the tieless work of the wider team, past and present, who give up their time to help young people develop.

He said: “It’s my responsibility to make sure that all the preparation is done, together with the wider team and our full-time administrative officer. We have over 50 cadets at detachments in Stornoway, Back, West Lewis, Harris, Benbecula and Daliburgh and they all benefit from the support of the team.

“I feel very pleased, humbled and totally surprised by the honour of an MBE, but I see it as a tribute to the whole team and to past voluntary staff who guided me and provided mentorship when I was a young man.

“I think it’s fair to say that I appreciate and value the recognition and feel that it’s also recognition for the Army Cadet Force in general.”

For the future, there’s no sign of Norman’s enthusiasm for his role slackening. He said: “I’m a great believer in what it does for young people – especially after the uncertainty of Covid. They are in need of a sense of belonging to an organisation. Young people respond well to challenges.

“This recognition is perhaps an example of what can be achieved as a result of membership of any voluntary organisation. They are all doing great work.

“This is a moment of hope, of looking forward, and a time for people to start considering membership of organisations like ours, both for cadets and for adult volunteers.”