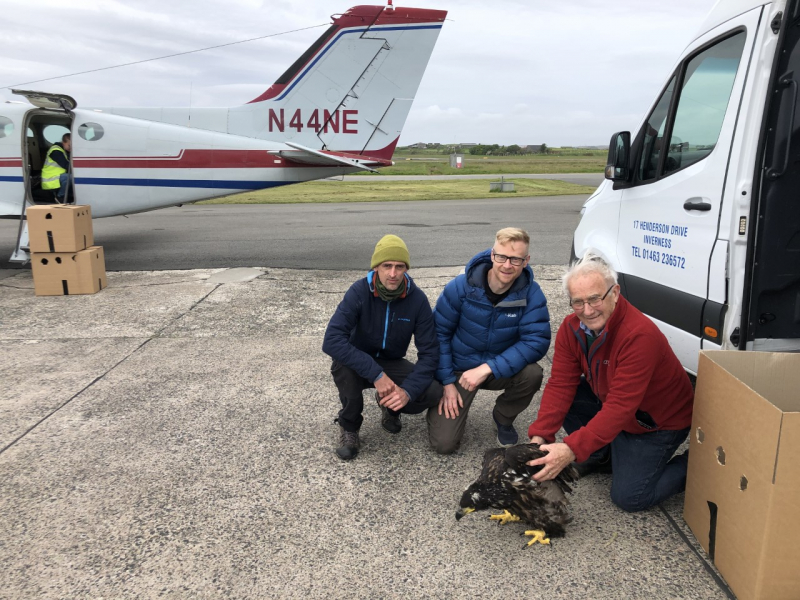 They took their first long flight with a difference as they were relocated to the Isle of Wight, off the south coast of England, by the Roy Dennis Wildlife Foundation.

Roy Dennis is pictured with one of the birds above.

White-tailed Eagles were once widespread along the whole of the South Coast of England, from Cornwall to Kent, before being driven to extinction by relentless persecution that began in the Middle Ages. The last known pair bred on Culver Cliff on the Isle of Wight in 1780.

The Foundation say that many parts of southern England remain highly suitable for the species, and following the reintroduction of White-tailed Eagles to Scotland – where there are now more than 130 breeding pairs – the Foundation have been granted licences by Natural England and Scottish Natural Heritage to begin an English reintroduction in partnership with Forestry England, based on the Isle of Wight.

Re-establishing a population of White-tailed Eagles on the South Coast will restore a lost species, and help to link populations in Scotland and Ireland with those in the Netherlands and France. The Foundation has been tracking their existing birds as they traverse huge areas of France, Germany and the Netherlands.

Many parts of southern England are capable of supporting breeding and wintering White-tailed Eagles, but the Isle of Wight was considered the most suitable location for the reintroduction. It is the last known breeding site of the species in southern England, is located close to highly suitable foraging areas in the Solent and surrounding estuaries, has numerous potential nesting sites in woods and cliffs, and quiet areas for immature birds. 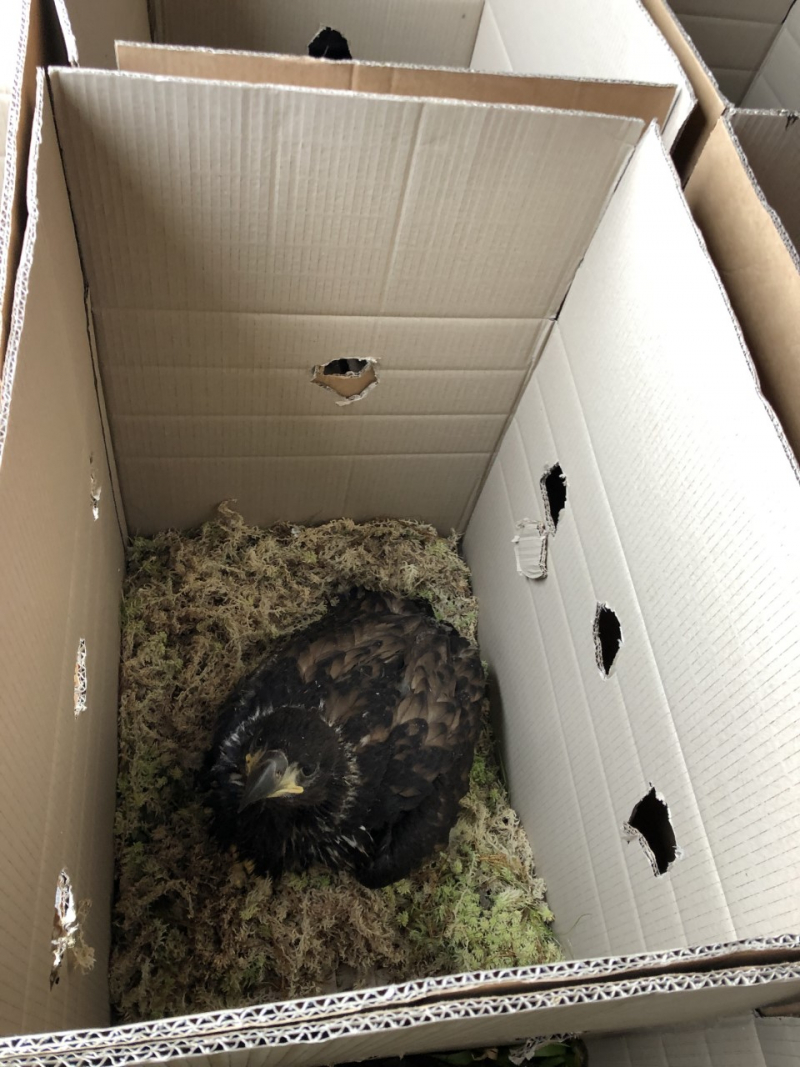 It is also well positioned to facilitate the dispersal of eagles both west and east along the coast to sites such as Poole Harbour in Dorset and Pagham Harbour in West Sussex. Inland lakes such as Blashford, situated 30 km to the north-west, will provide additional foraging areas, and the nearby New Forest is also likely to be visited by the birds after release. In time there is potential for White-tailed Eagles to spread to other coastal regions of southern England as well as to inland water bodies.

Evidence from the Netherlands, where there is a small but growing population of White-tailed Eagles, shows that the species will readily nest in densely populated areas, close to people. As a generalist predator White-tailed Eagles favour fish and water birds and scavenge carrion.  They tend to favour whichever prey is most seasonally abundant. Fish are particularly important in spring and summer, with waterbirds often favoured in autumn and winter.

The White-tailed Eagle’s preference for fishing in shallow water mean estuarine areas in and around the Isle of Wight and the Solent will be favoured fishing grounds, with seasonally abundant species such as Grey Mullet, likely to form a significant proportion of the diet. The Isle of Wight, Solent and surrounding area supports large numbers of migratory water birds, which are likely to form a key element of the diet in winter.

In Denmark where there are now over 100 pairs of breeding White-tailed Eagles (from none in the early 1990s) it is thought that most geese and ducks taken by eagles are likely injured or sick. They regularly search tidelines for washed up dead fish, birds and sea mammals and a recent study in Germany showed that carrion account for almost 30% of White-tailed Eagle diet in winter. The high concentrations of wintering wildfowl and waders in the Solent and surrounding area mean that foraging eagles will regularly encounter bird carcasses, and they will also take any washed-up dead fish or marine mammals as they search shorelines for food.