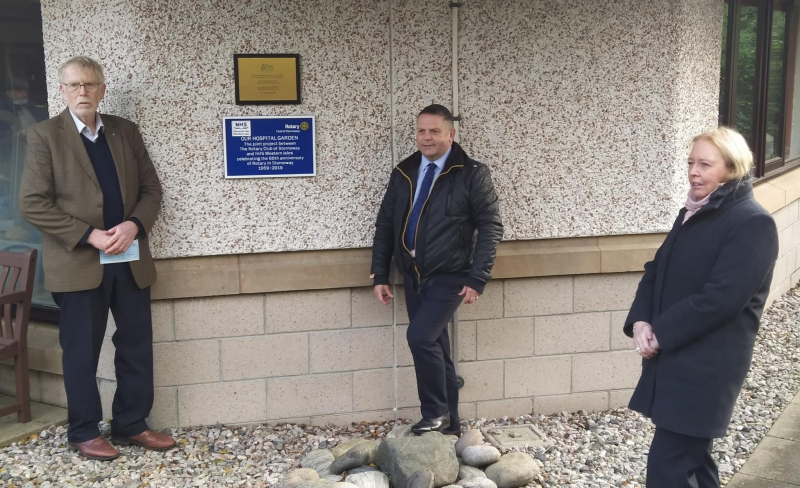 Members of the Rotary Club of Stornoway recently joined in the official opening of their ‘Our Hospital Garden ‘project marking the 60th anniversary of the club in the town.

The commemorative plaque was unveiled by the Chair of the NHS Western Isles Health Board, Gillian McCannon, seen right above, with NHS Western Isles chief executive Gordon Jamieson and retired surgeon Andrew Sim from the club.

Thirteen years ago, the Clisham Memory Garden, developed as a safe, therapeutic and friendly space for people with dementia, was opened to mark the 60th anniversary of the National Health Service.

For the last three years the Rotary Club of Stornoway has been revitalising and rejuvenating the garden to provide a sustainable, low maintenance and eco-friendly green space as a tranquil and peaceful place for patients, staff, visitors, and others – this is part of the Our Hospital Garden project. 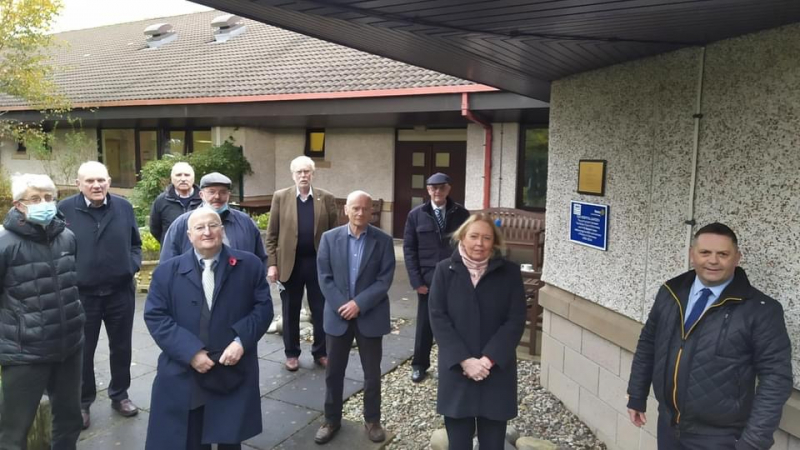 The Our Hospital Garden project is the Rotary Club’s contribution to Rotary International’s area of focus - “Supporting the Environment”. The project was awarded a Foundation grant from Rotary District 1010 (North of Scotland) and received matched funding from the NHS Western Isles Endowment Fund. It has been assessed by the “Its Your Neighbourhood” initiative of “Keep Scotland Beautiful” as having achieved Level 3 - that of an Advancing project. 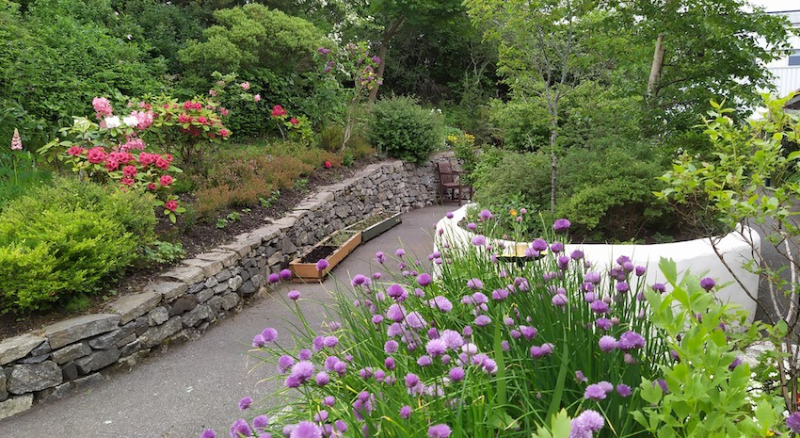 The day-to-day work is done by Rotarians, but none of the development would have been possible without the generous donations and help from many within the community.

Andrew Sim, President of the Rotary Club of Stornoway, thanked and paid particular tribute to Christeen Plum, Ken Kennedy, Angus Murray and Hamish Bremner for donating flowers and plants; James Leitch and David Maclean for building a small, but essential, stone wall; Robert Stubbington, the original architect of the Clisham Garden, for support and advice; Richard Robinson, his mother Anne and sadly deceased father Bill from the Willowglen Garden centre for supplying materials for the garden not only now, but from the very beginning; Tristan Rheinalt for cataloguing the bird life in the garden; Deborah  Vickers for making sure the birds are fed and putting up Christmas lights; and Alan Morrison, the hospital gardener, for keeping a watching eye on the project and cutting the grass. 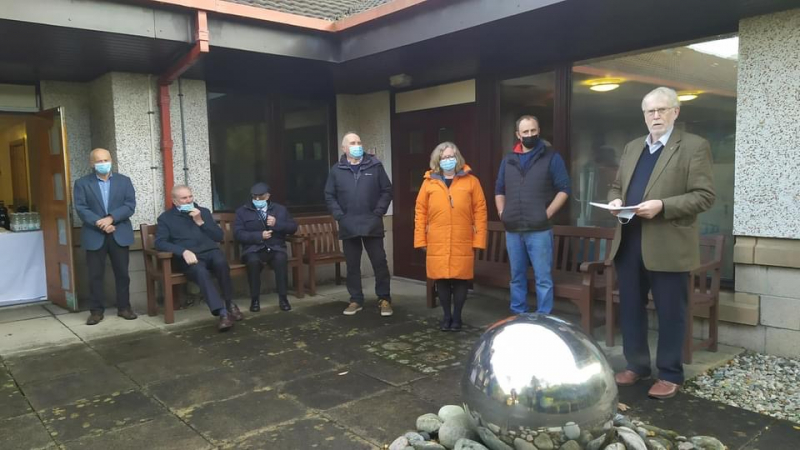 Gordon Jamieson, NHS Western Isles Chief Executive said, “Our Hospital Garden, taken forward by the Rotary Club ,will make available to patients, their families, friends and staff, a natural and lovely environment to relax, reflect and take time out seeing nature at its best.

“I am extreme grateful that we have this long-term project in the hospital grounds that serve our community. Sincere thanks to the Rotary Cub, it’s members , volunteers and those who have donated items, materials and their own precious time to make this a reality. Such wonderful progress during difficult times.” 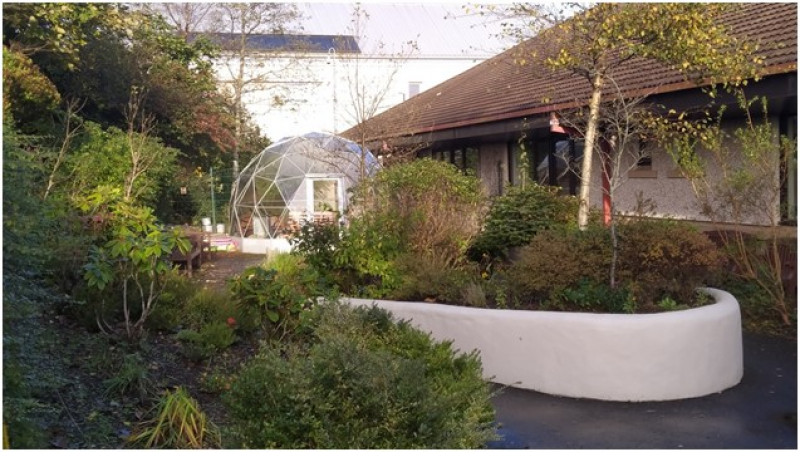 Attending the event were long standing Rotarian and one time Chair of NHS Western Isles, Sandy Matheson; the President of the Isle of Lewis Probus Club, Colin Tucker, many of those who had contributed to the project, Health Board personnel and a number of Rotarians.

Comhairle nan Eilean Siar Councillor Keith Dodson said later the garden was: "Very beautiful, a credit to all those involved in the hard work put in to create the Clisham Garden." 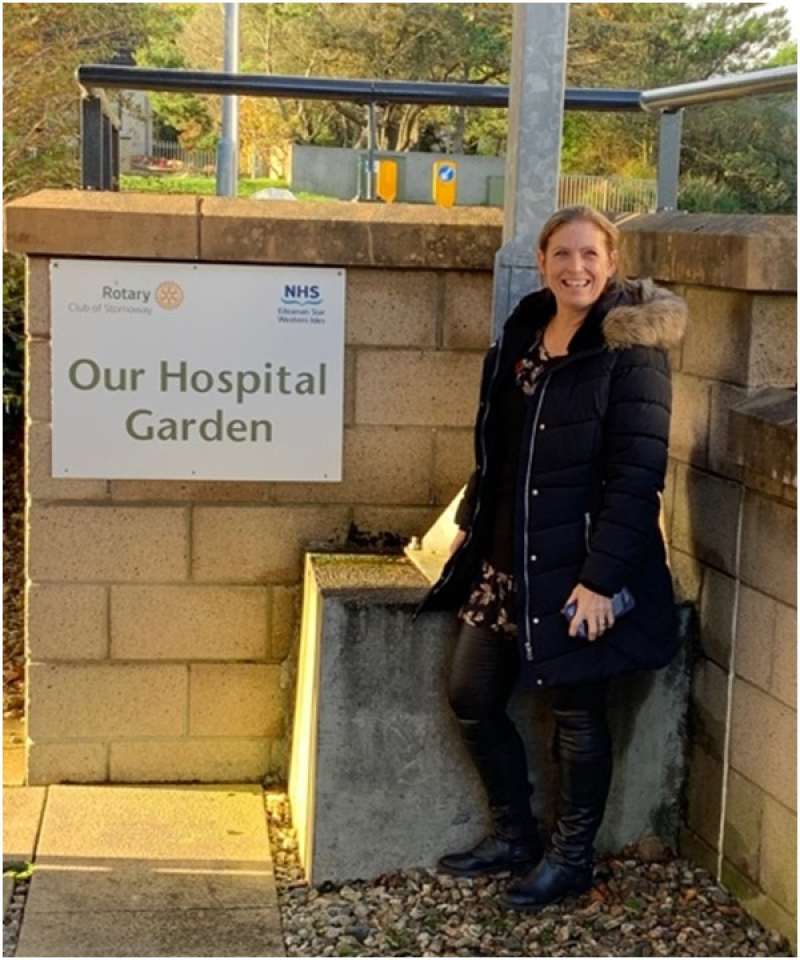 The Rotary District Governor for District 1010, Heather Stuart, on her first trip to Stornoway, had visited the garden the day before the unveiling.

ln closing the event, Professor Sim, on behalf of the Rotary Club of Stornoway, thanked the Health Board for the opportunity to pursue this project and stressed that the Clisham Garden was only part of Phase 1 of the Our Hospital Garden project; the creation of a woodland walkway and a wildflower meadow is scheduled for completion by next spring.

Phase 2 will transform the internal courtyard area within the hospital into a cloistered sitting space and a children’s recreational area; Phase 3 will seek to modify the landscaped green space adjacent to the cafeteria and allow the outside area to be used in more of our Hebridean weathers.