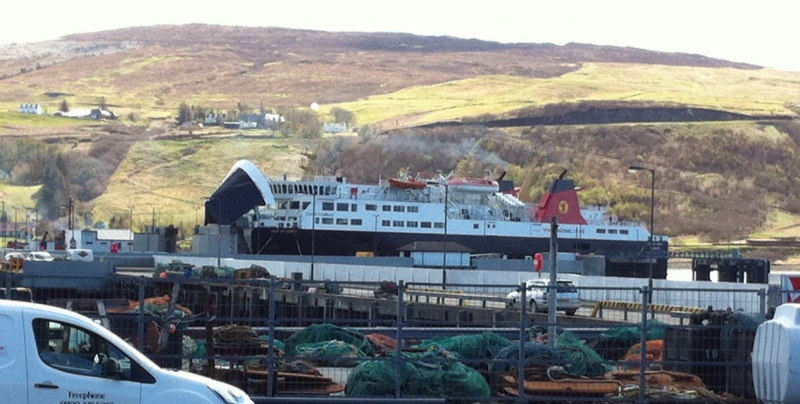 CalMac Ferries have told Harris Development Ltd that there’s nothing they can do about the service changes, reductions and closures affecting the Tarbert and Lochmaddy ferry routes this year and next.

In fact, Robbie Drummond, the Managing Director, CalMac Ferries Ltd and Executive Director, David MacBrayne Ltd, insists there is no reduction in service during the summer.

And little or nothing they can about timetabling as that is Transport Scotland’s responsibility.

He says: “Unfortunately, I am unable to provide a different answer to the one already provided.

“As previously explained, there is no reduction in service for the Uig-Lochmaddy and Uig-Tarbert routes. What we have done is keep the same number of sailings at the same time as before and simply formalised when the mezzanine deck will be utilised.

“The mezzanine deck was never deployed on all sailings in the past, indeed the decks cannot be deployed above commercial traffic. The timetable therefore is broadly equivalent to previous usage, but by formalising when the mezzanine deck is deployed it offers a more certain service for customers.

“We run a contract where the routes and timetables are tightly specified by Transport Scotland. The opportunity for communities to seek improvements is through the Summer and Winter timetable consultation process which we run on behalf of Transport Scotland.

“We operate the contract with the vessels supplied by CMAL, as would be the same for any operator of this contract and all of the vessels are deployed servicing routes across the network.

“There are no spare vessels which can be deployed to add capacity or additional routes.

“In my last letter I also explained that it is Highland Council that are closing Uig harbour for infrastructure improvements.

“During the time when that the harbour is unavailable to us it is inevitable that services will be impacted and we will not be able to run the same number of sailings.”

Kenny MacLeod, who chairs Harris Development Ltd, has sent an impassioned reply to CalMac and the Scottish Government.

“Firstly, I can see that Mr Drummond is still caught up in the fairytale land that is CalMac senior management as you again try to say there is no reduction in available capacity in the coming summer timetable, despite them limiting the number of sailings when the mezzanine deck will be available.

“In the real world where we live in the communities of Harris and Uist every available space is vitally important and of huge economic significance .

“The only certainty your new imposed timetable with restrictions on availability will give is that customers will have less chance of actually travelling on this service.”

And he goes on: “It is clear from Mr Drummond's comments in this and previous emails that CalMac have no powers whatsoever to improve this service, only to cut it.

“The problem clearly lies with Transport Scotland and the Transport Minister who between them are as ignorant of the impact of the imposition on our communities as the board of CalMac.

“They too seem to live in the same fairy tale land as CalMac if they think that the ferries can turn round in the same time irrespective of whether the mezzanine deck is used or not.  There is a complete failure in all three organisations to not recognise what every single resident in the islands have known for many years - the timetable bears no semblance with reality.

“However, you continue to ignore our views and refuse to add the necessary additional 10 minutes to the summer timetable to allow the ferry to be used to its maximum capacity for the benefit of the communities it is serving.”

And he says: “I could have some sympathy with your position re Uig if we were talking about private companies.  However, the parties involved are local and national government organisations.  Surely you are able to talk to each other to find a solution that limits the severe impact on our communities.”

Mr Macleod concludes that everyone on Harris has lost faith in the process: “Whilst you say that the latest round of consultations re Uig closed on 7th January the reality is that CalMac are merely a go-between and if there is to be any real progress then those who will be funding the provision need to be coming to us with their views and also with details of what has been looked at so far.

“From the last attempt in December putting up a few posters saying use the Stornoway Ullapool service is just an insult to the people of Harris.  Little wonder that so few came to give their views - years of being completely ignored have taken their toll.”