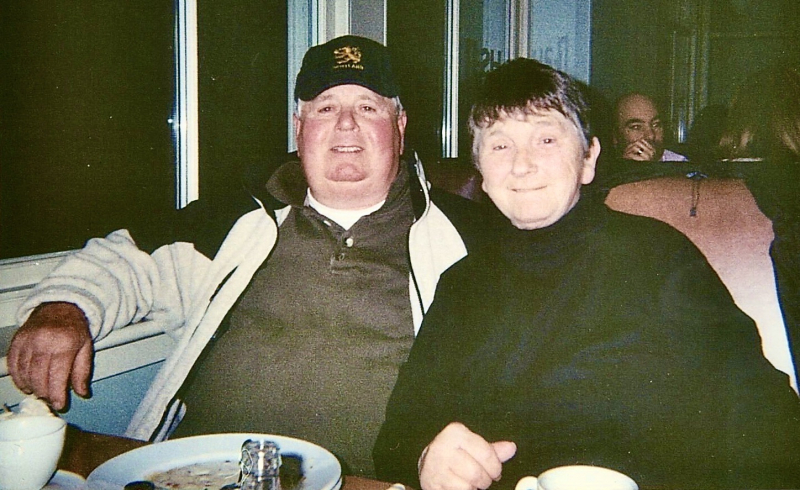 60 years on, recordings to air

A golden oldie recording is to be heard on air for the first time on Monday (24 January) in tribute to Christina Macdonald who passed away last year.

Two songs by Portnaguran resident Christina are to be played for the first time on Isles FM, 60 years after they were recorded in a studio in Manhattan.

Chrissie was the wife of John Tonkan Macdonald, of Portnaguran in Point. Tonkan is extremely well-known, both as a Mòd gold medallist and as a popular cèilidh entertainer.

Chrissie herself had many friends, from her work in Woolworths, at the Coffee Pot café and in the canteen in Arnish, but her golden singing voice has remained a family secret until now.

In fact it was long before she came to Lewis, when she was just 18 years old, that Glasgow-born Christina Reid went to work in Manhattan in New York as a nanny. She would sing while she was working and her employer, hearing her pure tones, felt she could go far.

Tonkan says “Chrissie had a beautiful singing voice and her employer paid for her to have proper lessons from an opera singer.

“Later she returned to Glasgow, where I met her while she was performing with Glasgow Amateur Thespians, with shows including West Side Story in their repertoire and actors including Bill Paterson among her colleagues.

“Chrissie came back to Lewis with me when we married. She completely gave up her singing career, but she helped me to my Mòd gold medal in 1990 by giving me tips on breathing and singing technique from her own training.

“Since we lost her, I have been saddened to think that so few people know of her ability and I wanted more people to hear what a wonderful singer she was.”

Tonkan tracked down two precious songs recorded in 1962, when Chrissie was still singing with her Manhattan tutor. Cleaned up, digitised and transferred to CD, they were handed over to community radio station Isles FM.

Now presenter Uilleam Macleod has recorded a tribute, which is to be played on Monday (24 January) shortly after 5pm, during the station’s Drivetime programme.

Tonkan said: “I would like this to be a tribute not just to Chrissie herself, but to all the wonderful medical and hospital staff who helped to look after Chrissie in her final illness. She was a funny, loving person and still singing even when she was in hospital. The staff loved her and they were very kind to her.”

The tribute to Chrissie Macdonald will be played on Isles FM, 103FM and via the online link at http://www.islesfm.com, shortly after 5pm on Monday 24 January.

The picture shows Tonkan and Chrissie on a night out in Stornoway some years ago.