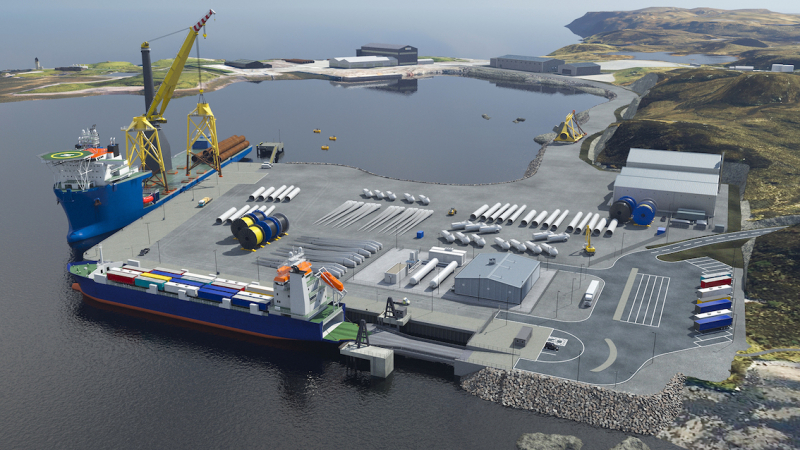 Stornoway Port Authority has awarded the £49million contract for construction of its new multi-purpose Deep Water Terminal to building and civil engineering firm McLaughlin and Harvey.

Work on the transformational project at the Outer Hebrides’ main port is expected to start in the coming weeks and be completed before the end of next year.

The Deep Water Terminal will provide modern facilities for a variety of sectors, including the energy and transport industries, and its design will enable it to be adapted for a wide range of future uses.

As well as being able to accommodate on and offshore wind farm vessels and support other energy sector activity, its main berth will be suitable for the largest cruise liners.

Development of the terminal will also increase the capabilities and flexibility of the Arnish fabrication yard.

The Port Authority has worked closely with the Scottish Government, the Scottish Futures Trust (SFT), Highlands and Islands Enterprise (HIE) and Comhairle nan Eilean Siar over the past four years to advance the project.

The trust port also acknowledged the important involvement of the land interests, including Crown Estate Scotland and the Stornoway Trust.

Deputy First Minister John Swinney said: “The development of the Stornoway Deep Water Terminal will be a game changer for the local economy and for Scotland’s aspirations to grow our renewables and cruise sectors.

“The Scottish Government has long been supportive of this project, which will create jobs and multiple economic benefits for the Hebrides.

“The terminal is a key element of the Islands Growth Deal and will enable cruise traffic and expansion of the offshore renewables supply chain in the wake of the ScotWind offshore wind leasing round, as well as providing infrastructure for a range of other potential activities.

“As Chair of the Stornoway Deep Water Terminal Advisory Board, I am pleased to see work now getting underway and this important project taking a significant step forward.”

David McIntosh, associate director at the SFT, added: “We have supported Stornoway Port Authority and the Scottish Government in the innovative funding mechanism for this flagship project where our infrastructure expertise and economic advice has helped unlock substantial inclusive economic growth.”

Stornoway Port Authority chair, Murdo Murray, said the signing of this contract signalled the imminent start of “an historic project which has the potential to truly transform the economy of the Outer Hebrides.”

Mr Murray continued: “The Deep Water Terminal will open a new gateway to the islands for a wide range of sectors and become a catalyst for significant further development here. It is already attracting high levels of interest from potential customers.

“A huge amount of work has already gone into turning this vital development into a reality and we are very grateful to all our partners for their continuing support.

“McLaughlin and Harvey are highly experienced in this kind of work and we look forward to working with them on this project.

“The award coincides with my retirement after 10 years as a board member and I cannot imagine a more satisfying end to my time at the Port Authority.”

Roddie Mackay, Leader of CnES, said: “This is a significant milestone in this major project for the Western Isles and it will be tremendous to see the works progressing.

“The project has the potential to drive new economic activity, sectoral innovation and the creation of new jobs in Stornoway, Lewis and across the Islands.

“The Comhairle is delighted to have played a critical role in securing the bulk of funding for the development and looks forward to working with the SPA and other local partners to maximise the economic return for our communities.”

Joanna Peteranna, HIE area manager in the Outer Hebrides, said: “The Deep Water Port is an integral part of the Stornoway Port masterplan. It’s a really exciting project that will have positive impacts well beyond Stornoway, helping to diversify and strengthen the wider economy of the Outer Hebrides.

“The cruise market is one important aspect. However, this investment will also put the port in a strong position to compete for future opportunities in other sectors, including renewable energy fabrication and aquaculture.

“When all these elements are taken together, we believe this has the potential to be a genuinely transformational project for the islands.”

McLaughlin and Harvey is based in Belfast and has offices in Scotland and throughout the UK.

John Mariner, the company’s Contracts Director (Civil Engineering), said: “McLauglin and Harvey is delighted to have been selected by Stornoway Port Authority to deliver the construction of the new Deep Water Terminal at Stornoway."

SNP MSP for Na h-Eileanan an Iar, Alasdair Allan, has welcomed the news that the contract to build a deep water terminal in Stornoway Harbour has now been awarded.

“This marks another key step forward for Stornoway port’s development, which will create significant opportunities both for the town and for the Western Isles as a whole.

“I would like to commend the efforts of the Port Authority, the Scottish Government, the Stornoway Trust, and all the others involved in this project so far. I would also like to offer my congratulations to McLaughlin and Harvey on being awarded this contract, and I look forward to seeing the progress of their work in the months ahead.”

The MSP quotes were added some time after the original article was posted.