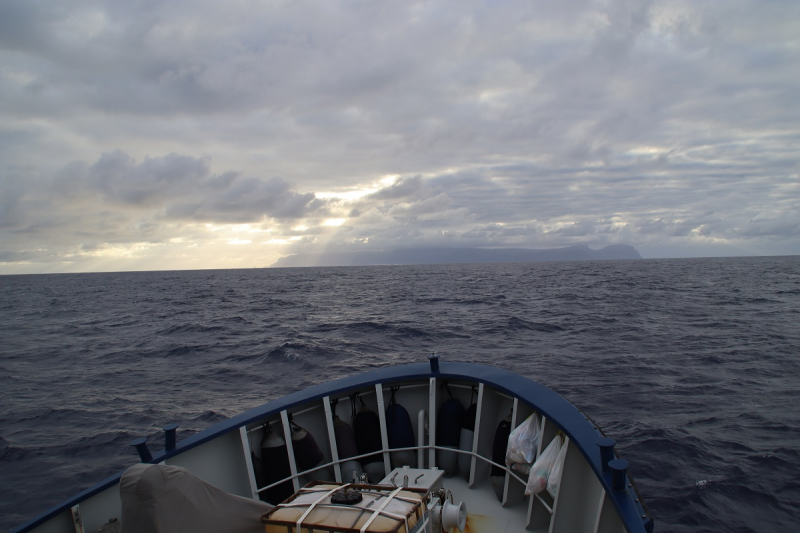 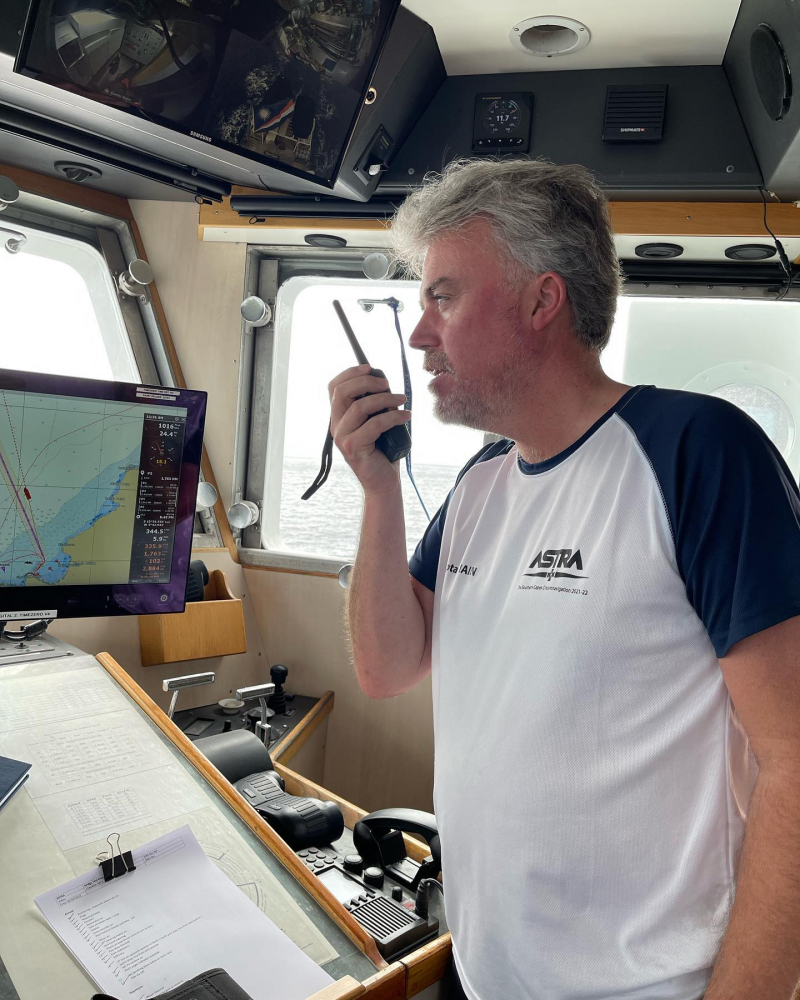 A Barra man who has spent the past six months voyaging the world’s southern oceans has made his last port stop before completing an official world first – a round-the-world circumnavigation (via the capes) on an owner-skippered full displacement motor boat of less than 24 metres.

To qualify for the official world first, the voyage must involve crossing the equator twice and travelling through 360 degrees of longitude at a minimum distance of 26,600 nautical miles.

Meeting the conditions Iain Macneil, originally of Brevig, today (Tuesday 10 May) passed the 30,000 mile seamark off the coast of West Africa, having skippered his 80-foot vessel past Tierra del Fuego in Chile on 19 January and rounded the final cape, Cape of Good Hope in South Africa, on 26 April. 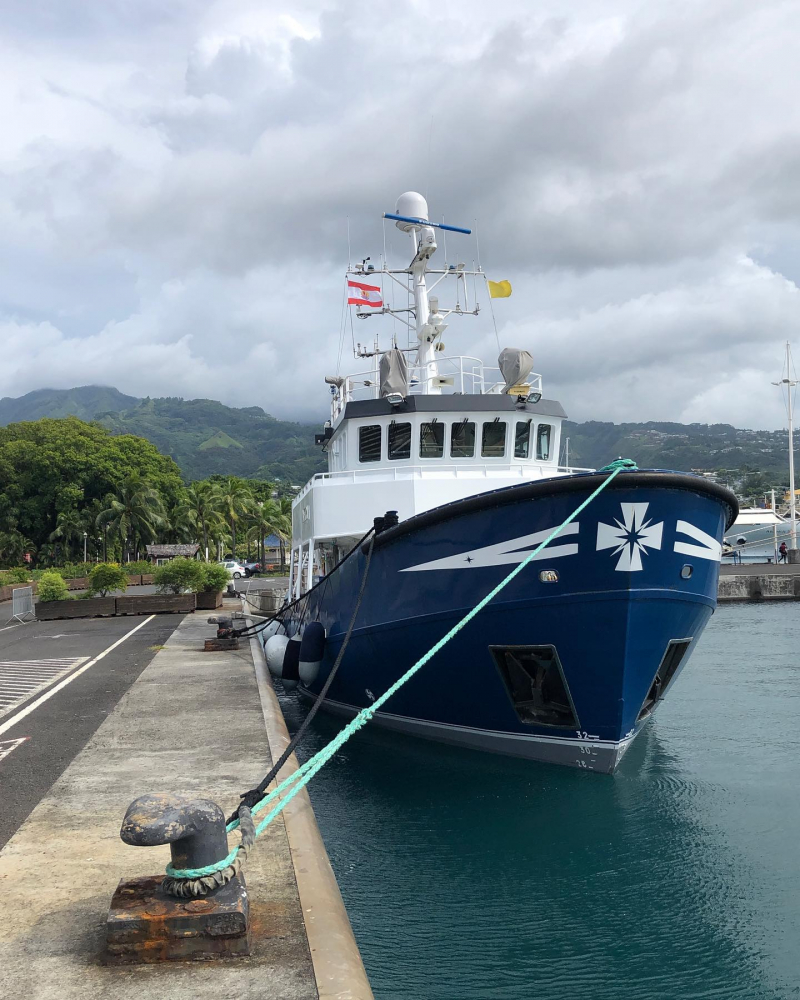 Today (Tuesday) sees completion of a fuel transfer at sea, with 17,500 litres of diesel transferred from on-deck storage tanks to the main internal tanks, an operation which takes five days.

It’s just one of the practical challenges taken on by Iain and his crew as they brave some of the world’s roughest seas, but the voyage is handled with ease by the 23.35 metre vessel, which has the highest ice class rating and ice breaking capability.

Originally built as a rescue cruiser for the Swedish Sea Rescue Society – Sweden’s version of the RNLI – in her customised form, Astra has been described as the ultimate passage-maker, supremely stable and designed to withstand storm, ice and long periods at sea.

Skipper Iain describes her as ‘the most capable vessel on the planet,’ but she’s also, according to her crew, cosy on board, with plenty of hot water and interior heating.

Iain set himself the challenge of a complete circumnavigation after 34 years at sea, beginning when he left home for the Merchant Navy at 16 and including experience on large ships and tankers as well as smaller craft.

He’s now chief executive of Witherbys in Livingston, publishers of operational guidance and technical standards for the shipping industry, but he doesn’t spend long away from the sea.

In fact, before beginning this voyage in December, he skippered Astra over 9,000 nautical miles from the Canary Islands to the Arctic Circle, finishing at her previous home port in Sweden.

For this epic challenge he is accompanied by a crew including Edinburgh chief mate Mikey Napier, who has worked on the British Antarctic Survey team, with fisheries protection and on small craft on Scotland’s west coast.

Second mate Dan Rafferty hails from East Ayrshire and has worked on cargo coasters and large container ships, while chief engineer Paul Griffiths originates from Durban, South Africa and has transatlantic experience as well as working on emergency response vessels.

Also on board for the final leg of the journey is bosun and junior watch officer Carlos Casola, a yachtsman and watersports enthusiast who has worked for several years in and around the shipyards of the Canary Islands.

The onshore team includes Iain’s wife Kat, who acts as designated person ashore and monitors the vessel’s position, safety and diet intake, all the while continuing to run the maritime guidance company, Witherbys.

All have had to weather the highs and lows of the voyage – literally in some cases. In March MV Astra took on the notoriously rough Tasman Sea, where two exceptionally large waves took the vessel aback.

Mikey, who was on watch when one of the 10-metre monsters hit, said: “In the seven months onboard, including the rounding of Cape Horn with winds gusting 60 knots, I have never experienced anything remotely like that wave."

Other experiences have been more rewarding – including celebration of Burns Night  with Scottish fare including Stornoway black pudding and idyllic time ashore on the beaches of Tahiti.

The crew hope to make landfall at Puerto Calero in Lanzarote on Sunday 15 May, having travelled over 32,000 nautical miles, with land-based crew and supporters eagerly anticipating their homecoming. 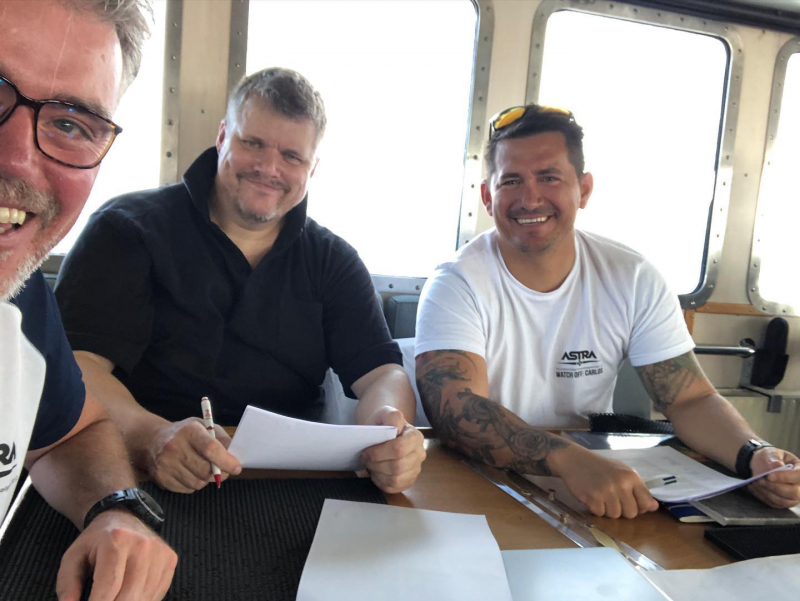 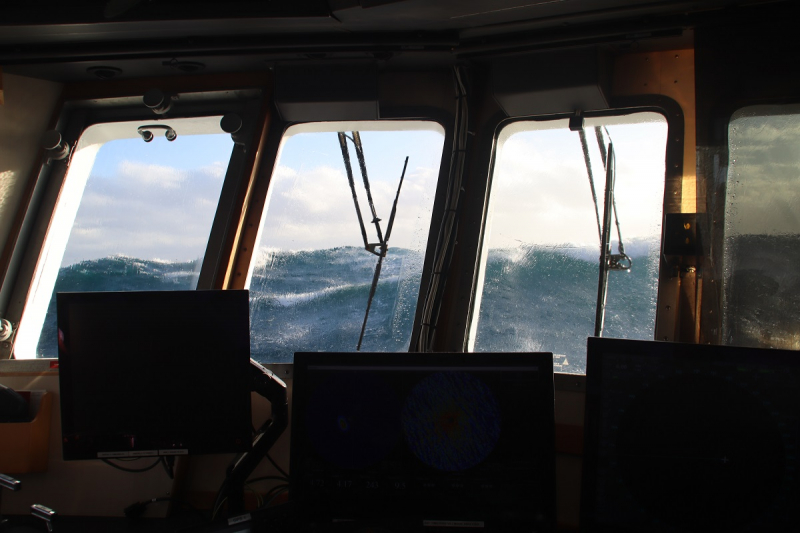 The pictures show MV Astra moored in Tahiti and before leaving Lanzarote, with skipper Iain aboard, solid water seen from the bridge in the Tasman Sea, the final port stop on the horizon at St Helena and Iain with crew members Paul and Carlos assessing repairs as they head for Lanzarote (MV Astra).