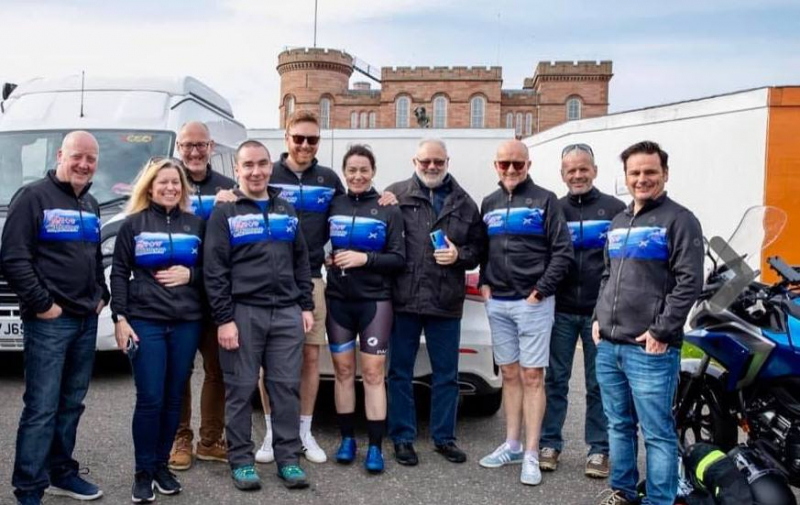 A second record has fallen to Stornoway cyclist Christina Mackenzie, who steamed back into Inverness yesterday afternoon (Saturday 14 May) in high spirits, after cycling over 500 miles around the north coast of Scotland.

The women’s record for cycling the North Coast 500 route is still to be officially ratified, but the Road Records Association has posted confirmation that it’s considered to be hers, after she made the circuit in a provisional time of 36 hours 39 minutes and 7 seconds.

Christina admitted that she ‘nearly bailed’ after six hours, with rain and a strong cross headwind pushing against her as she headed west from Inverness on Friday morning.

But she credited terrific support and teamwork with pushing her through the lows, saying today: “It takes much planning and organising in order to complete any record attempt and without a great team such attempts just aren’t possible.”

On hand throughout the gruelling feat were family, friends from the islands and from her Stirling cycle club, and representatives of her sponsors, who included main sponsor Williamson Food and Duncan Mackay and sons, both long-time backers from Lewis.

Christina was raising funds for Cruse Scotland, the bereavement support charity, and has the satisfaction of seeing her fundraiser at https://www.justgiving.com/fundraising/christinamackenzienc500 whisk past her £2,000 target, standing on Sunday afternoon at £3,000 – and still climbing.

Before setting out she explained the motivation for her choice of charity, saying: “Cruse Bereavement provided support to me, helping me understand the grief I was experiencing through the loss of my parents and loved ones.

“The support I received from Cruse helped me manage my grief from day to day, giving me the reassurance and confidence to accept, allow and adjust to life again.”