CalMac Ferries have come under fire from the influential Mull and Iona Ferry Committee over their plans for punitive charges for passengers who change bookings or are unable to make it to their planned sailings.

The committee say the scale and nature of the ‘no show’ problem appears poorly understood by CalMac chiefs and their proposed punitive regime is unlike anything used by other ferry companies.

CalMac justifies its plans on the grounds that passengers “cancel their bookings at very short notice. This results in unused deck space”.

The ferry company claims that of the 190,000 ‘no-shows’ each year, 46% (or 87,000) occurred on the Craignure-Oban route. But total car carryings on the route were 170,000 in 2019, says the ferry users committee. "87,000 ‘no-shows’ is 51% of the total recorded carryings. It is not credible that this huge proportion of vehicles failed to travel or cancelled their bookings at very short notice.

"What actually happens on our route is that very often vehicles will travel on a different sailing to that for which the ticket was originally purchased. That may be for a number of legitimate reasons often out of travellers’ control, such as traffic delays, or weather warnings.

"These vehicles are not therefore ‘no shows’, but changed travel plans."

One respondent to the committee on Twitter showed how this works. "As an example, we changed ferry booking in March to earlier one because we believed CalMac wouldn’t sail (weather) and we had to get off.  CalMac didn’t sail, but their cancellation was long after we would have had to pay to change. We’d have missed our holiday!"

A number of locations - like Lewis and Harris, South Uist and Barra have alternative routes to the mainland. The Mull and Iona Committee say: "Often late decisions are taken to change which ferry will be used, frequently due to weather disruption," they tell CalMac.

"We therefore have low confidence that the scale and nature of the ‘problem’ is understood, and therefore the ‘solution’ is inappropriate. 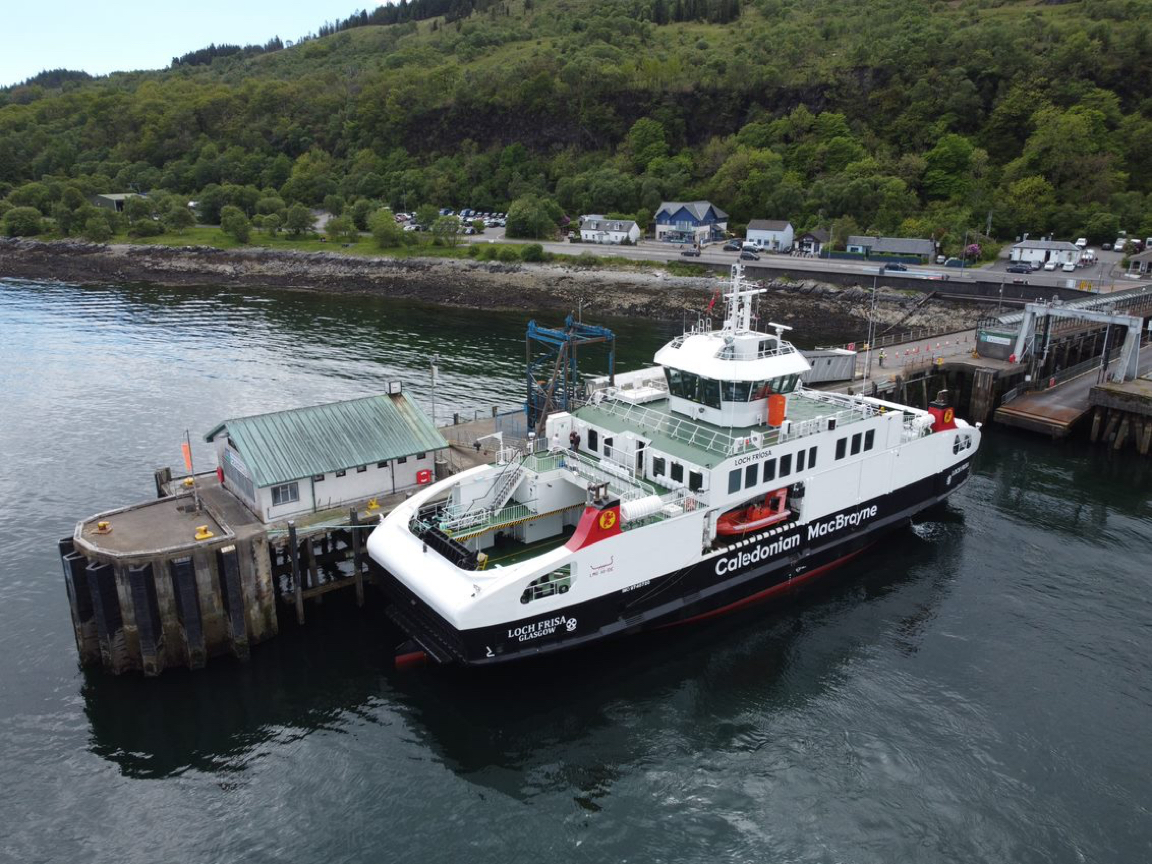 An extra vessel at last…MV Loch Frisa has now made it to Craignure, where she will soon begin a week of familiarisation before getting to work as part of the CalMac fleet.

And the committee says: "The problem is not passenger behaviour, but CalMac systems.

"The current ticketing system is very crude. In particular the accuracy with which it can allocate deck space to each size and type of vehicle is low. There appears to be a tendency in the system to compensate for that inaccuracy by under-selling sailings.

"Sailings marked as ‘full’ online regularly depart with spaces, even early in the day. The scale and frequency of this unused space cannot be solely explained by ‘no-shows’. Inaccurate matching of ticket sales to available deck space is a major contributor, as argued by CalMac themselves, who are introducing a new ticketing system that is intended to make things more accurate.

"Improved deck space allocation should enable more tickets to be sold for each sailing, therefore utilising the vessels better. It will also give passengers more confidence that published ticket availability is more accurate.

"Currently, if a vehicle arrives earlier than planned, they are often carried on that earlier sailing because there is often spare space. It appears that this is recorded as a ‘no-show’, but the cause is not the passenger’s poor time keeping, but CalMac’s inaccurate ticket sales system. If space on that earlier sailing had been sold more accurately it would have made it less likely for passengers on the later sailing to move forward ‘on spec’.

"The proposed charges are punitive and disproportionate  Whilst it may be stated in the current terms and conditions that tickets will only be honoured on the sailing for which they were purchased, in practice that is not the case. Tickets are freely accepted, regardless of which sailing they were originally bought for.

"It is not therefore correct to suggest that the proposed 100% penalty for changing sailing less than 48 hours before departure is ‘no change’. It is a huge and entirely disproportionate change to address a perceived ‘problem’ that the company appears to place entirely on its customers.

CalMac claim there are passengers who “...make multiple reservations, then cancel the ones they no longer require at late notice, often too late for us to reallocate the space.” . If this indeed the problem (and …we don’t believe it is), then the solution  is to identify those ‘offenders’ and focus on them.

"Under the proposals, someone who arrives late due to congestion en-route (or any other legitimate issue) will have their entire ticket fee forfeited. Such a penalty will only penalise completely innocent passengers unnecessarily and disproportionately.

"Is it fair to have 100% of one’s ticket forfeited because of heavy traffic, poor weather or a breakdown en-route?"

The committee says the ferry system is an extension of the road network, as embodied in the ‘Road Equivalent Tariff’.

"Islanders’ journeys are often essential, part of everyday life and business, and not discretionary. Justifying the proposal on the grounds that it is“...comparable to the policies of other UK ferry operators”, demonstrates a lack of understanding of how the ferry service is used.

"The service between Craignure and Oban with 20 departures each day in summer, is more comparable to a local bus service than a cross-channel ferry. It is a public service, as essential as a road, and should be as easy to use as a bus service.

"Our journeys are not planned weeks ahead, but just a few days or even just hours. Flexibility and freedom is a fundamental requirement of life-line public ferry services, and these proposals will only undermine those principles.

"It is also inaccurate to say that punitive charges like this are common-place in other UK ferry operations. From a survey of other operator’s websites, such restrictive and punitive charges do not seem to be the norm:

"We can see no evidence of CalMac’s contention that punitive cancellation charges are the ‘norm’ in the wider ferry industry."

"The proposed system together with its limited list of exemptions will result in costly, frustrating, time-consuming administration, particularly for the company itself. For example, passengers who have missed a ferry because of a hospital appointment running late will not be exempt from the charge, but those with a cancelled appointment will.

"Passengers who themselves are too ill to travel will be exempt, but those cancelling a trip because the person they are visiting is ill will not. Someone involved in a road traffic accident will be exempt from the charge, but someone delayed by a traffic jam caused by an accident will not.

"Someone who diverts to Lochaline because of a Calmac weather warning on the Oban service will not be exempt, but someone who misses a ferry because a connecting ferry journey was delayed due to weather will.

"There are innumerable scenarios where a claim against a CalMac charge will be reasonable and strongly argued, which will inevitably consume huge amounts of passengers’ time in appealing, and the time of CalMac staff in dealing with it. This will only add to the cost and inconvenience of customers, and also the workload, stress and expense of employees.

"The potential for dispute between staff and passengers at check-in will only be heightened. Port staff will be in the invidious position of having to adjudicate between passengers who have fallen foul of CalMac’s terms and for whom the stakes will have become much higher. They face loosing their fare, as well as their place on the ferry if they arrive two minutes after check-in.

"The upshot of these proposed punitive charges is that CalMac will generate more ticket revenue. If a ticket becomes invalid because of late arrival or changed plans, the company will be the prime beneficiary – the car space will have been sold twice. To users, this is another example where it feels like customer service comes a poor second to the commercial and operational preferences of CalMac.

"One of the biggest issues that islanders’ face is the unfair ‘first-come-first-served’ booking system. It is prejudiced against islanders. “First-come-first-served” prioritises those who can book furthest ahead of time, and penalises islanders who cannot plan every journey weeks ahead. We have been repeatedly writing and arguing for this critical issue to be remedied, but nothing has been done. Instead of listening to the needs of islanders, we instead have this ill-conceived proposal that seems to have its origin in the operational preferences of a distant mainland management, rather than the needs of the islanders who rely on the service."