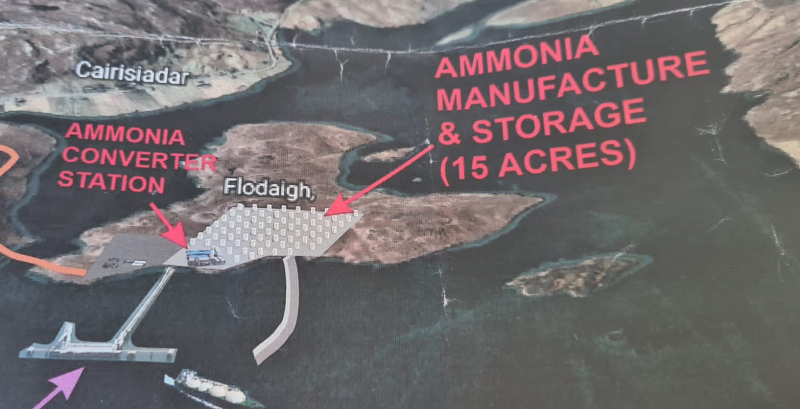 Councillors on Comhairle nan Eilean Siar will this week move to defuse a row which erupted in the Uig district over plans to create jobs locally which would be based on the work of an offshore windfarm planned for the near Atlantic.

The officially titled Scotwind Area N4 is about 5km offshore between Carloway and Barvas and is in water of less than 60m depth. This means that conventional, bottom fixed technology, probably jackets secured to the seabed by pin piles, can be used and that first generation could take place around 2028.

This is closest to land of all the offshore wind schemes – forced into that location by national restrictions to the south, particularly around St Kilda, and by the deep-water passage for large vessels west of the Hebrides created to avoid the risk of environmental catastrophe in the Minch.

The offshore wind generation is needed to reduce dependence on fossil fuels and help mitigate the advancing catastrophes of climate-change.

However, an outline proposal envisaging 100 jobs could be created by a plant to make hydrogen using the wind-generated electricity on the Island of Flodaigh aroused an immediate protest. Hydrogen is regarded as the fuel of the future. Hydrogen has to be combined with nitrogen to make ammonia in order for it to be transported to market by ship.

Now council officials are seeking authorisation for a formal study which will help the islands secure the most benefit from the deployment of Offshore Wind production around the islands.

All this has been building up for years.  Marine Scotland’s Marine Sectoral Plan for Offshore Wind (2020) had been in preparation since 2013.  It identified 17 ‘Plan Option Areas’ around Scotland suitable for Offshore Wind deployment. These Areas became the basis for Crown Estate Scotland’s ‘ScotWind 1’ Offshore Wind Leasing Round which opened to bids in June 2021. Developers have secured lease options across N2, N3 and N4 – the nearest to the Western Isles – and suggest a timeline which could see first turbines in the water in N4 by 2028, followed one or two years later by deployment in N2 and N3.

As things stand, both developers have been offered connection through links to Dounreay in Caithness by 2033 but the Comhairle, its partners and the developers themselves are pressing for earlier connection through the islands as landfall of electricity is the only way to secure substantial benefit for the local community. This would require the completion of the interconnector to the mainland – a quite separate scheme – which would also allow the widespread development of land-based windfarms across the Islands.

While one set of residents is opposed to developments in connection with the planned windfarm, another group is anxious that the local community should gain from any such projects.  Council officials have to balance the conflicting demands.

The opposition group in Uig described the concept of green hydrogen production on Flodaidh as a “hazardous industrial ammonia plant.”

They claimed it was “originally mooted as a new pontoon to allow boats to service the proposed N4 offshore Windfarm off the west side of Lewis” but then turned out to be a “much larger and more contentious proposition.”

However, this plan was simply a concept mapped out in response to requests from local organisations in Uig for some local gain in terms of long-term jobs from the offshore wind project.

Overall, CnES is continuing to fight for additional jobs and development. A report to the Council’s Sustainable development committee this week says: “The location at which our ScotWind developers connect to Grid will be very important. At the time of writing, both developers have been contracted to connect to Grid through Dounreay by 2033 (at the earliest). If this arrangement persists, there will be no landfall of electricity in the islands and much of the benefit associated with landfall will be lost.

“Given the visual impact of these deployments on the local community, this bypassing of the islands is considered to be unacceptable by the Comhairle.”

The report explains: “ScotWind Area N4 is located close to shore, closer to shore than any other ScotWind Area in Scotland, and this is because the International Maritime Organisation’s Deep Water Shipping Route is located immediately behind Area N4, meaning that the Area cannot be moved further offshore.

“There was no option to identify a ScotWind Area further to the south, off Harris, Uist or Barra, due to Defence activity, sightlines from the St Kilda World Heritage Site and the National Scenic Area around Harris and North Uist.

“It is accepted that there will be significant visual impact from the 40 to 60 wind turbines, each with a tip height of 280m, in Area N4 and this means that the associated supply chain and community benefit should be equally significant.

“In the development phase, over the next five years or so, local opportunities will be available in survey work, accommodation, transportation, catering, plant hire, fuel supply and so on.

“In the construction phase, likely to be from 2026 onwards, local opportunities will be available in port services, fabrication, vessel hire, diving, onshore construction, landscaping, catering, accommodation, PPE, wholesale, electrical services, fibre optics, heavy lift equipment, plant hire and a multitude of other services which can all be provided locally.

“A local Operations Base will then provide a number of highly skilled jobs in marine coordination, asset management, health and safety, data analysis, weather forecasting and so on over the lifetime of the Wind Farms.

“Through the Memorandum of Understanding, both developers have also committed to indirect community benefit such as a supply of low-cost electricity for local communities.”

The new Deep Water Terminal in Stornoway will be the principal Operations Base for ScotWind locally, accommodating the large Construction Support Vessels, Cable Laying Vessels, ‘Jack-Up’ Installation Vessels and Service Operation Vessels in addition to turbine assembly and float-out.

The report says: “There is a clear case for a fast-access base on the West Side of Lewis where the control rooms for all three Wind Farms could be located and from where smaller Crew Transfer Vessels can access the Wind Farms quickly, maximising time onsite for maintenance etc.

“This report seeks authorisation to commission a Feasibility Study into such a West Side Operations Base which could employ up to 50 people and help rebalance the island economy, stemming population drift towards Stornoway and sustaining, and growing, some of our most fragile communities.”

The report acknowledges that recent discussions with the community around this opportunity “revealed a considerable measure of concern over the suitability of one of the candidate sites, Flodday Island, for this purpose and the Comhairle will now want to respond to this concern by revisiting the list of candidate sites.”

If there’s no agreement in the future on a site or sites on the West Side, all the spin-off work could be concentrated at Arnish instead, it is understood.