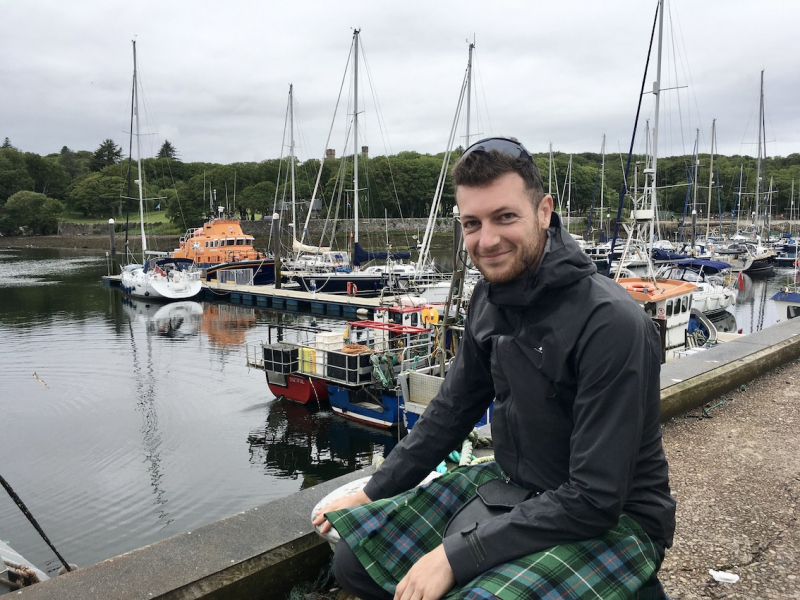 On 27 July 2020, at 7.40pm, Charles Attonaty closed the door on his home in Normandy, France and set out on a world tour – alone, without a plan, without a time limit and without any money in his pockets.

Now Charles is in Stornoway, having visited 19 countries and learnt a lot about the kindness of people and the strange workings of fate along the way.

Charles left behind a potential career in human resources, a freelance business as a dietician and ethical food delivery rider, a flat, his family and all the trappings of a lifestyle that had, he says, become ‘like a jail’ to him.

“I know exactly the time and date that I left home, because I remember thinking it was like a second birth to me, the day I left my old life behind,” he told welovestornoway.com

“I had my luggage and camping equipment packed for three months in Thailand, which I could not do because of the lockdown for Covid, and I just picked up my bag and slammed the door behind me.

“I didn’t even tell my parents I was going. I had no timetable, no end date, no plan for where I would go. I just went.”

That marked the beginning of a journey of self-discovery which has, for Charles, expanded the universe of what is possible and illustrated for him the way in which we are all interconnected.

He divides his travels into ‘steps’, punctuated by short visits home to change his kit for a new season and to reassure his parents. On the first one, he travelled through France, Monaco, Italy, Croatia, Hungary, Romania, Bulgaria and Turkey.

Next he walked and hitch-hiked through Belgium, the Netherlands, Germany, Denmark and Luxembourg, and by the end of that second stage he had come to a realisation.

He said: “I realised that I was living crazy, lovely moments, so I decided to take the risk and leave all my comforts behind entirely.

“I set myself rules – I would always travel alone, without money, with no plan and no time limit. I won’t ask for food or a place to stay and all the time, as I pass through different countries, things will evolve and I will make things a little harder.

“The higher the difficulty, the greater the gift that comes from the experience, and the more I appreciate simple things like a warm bed, a hot shower.”

After setting his strict rules, his third 'step' took him to Sweden, Finland, Norway and Lapland – in winter, with temperatures down to -32º. He stayed with Sami people, sampled Finnish saunas, rode a dog sled and spent Christmas with a family in Sweden.

That visit gave him one example of his increasing understanding that everyone is ultimately connected somehow. He stayed for Christmas with a couple called Sverker and Kristina, then set off walking along a road where there was virtually no traffic.

Two days later one car did come along, and the driver stopped and opened her window. She was concerned that he was alone and walking in such inhospitable conditions – and it turned out that she was carrying as a passenger Sverker and Kristina’s daughter, heading home for New Year.

There was a time when Charles viewed such encounters as chance or luck, now he says: “After hundreds of such incidents, I don’t use those words. I use bigger words like destiny and synchronicity, because I know I have a particular energy when I am alone, with no plan and no limit on what I do next.

“It encourages the universe to open up possibilities to me. When I started I was pretty sure the universe was bad, I thought I knew the world, but I was in total ignorance.

“Once I had put myself in the hands of the universe I found proof that humanity is still there. People are good and bad everywhere. I have developed a stronger spirit and become more open to human beings. I take the time to learn about lifestyle and local culture and I really appreciate beautiful landscapes and lovely people.”

Charles arrived in the Western Isles on Wednesday (22 June), after a man he was staying with in Skye bought him a ferry ticket across to Tarbert. He walked north for three days, drivers stopping to check if he was OK, and one giving him a piece of cake on the road.

His route took him to Callanish where he was offered hospitality and a connection to Stornoway, where Isles FM presenter Donald Saunders interviewed him for the radio and showed him round the town.

Last night (Monday) he made friends with the midges as he camped out in Lews Castle grounds and he has no idea what will happen next – but he is quietly confident it will be for the best.

Charles said: “I have had so many experiences along my travels. I walk for five to 10 hours a day, I sleep outside in a tent or in a hammock and sometimes local people invite me to stay, feed me or pay for a hotel.

“Sometimes I hitchhike and I have caught lifts on a tractor, lorries, a dog-sleigh in Sweden, a tank in Wales, even a glider in Germany.”

One thing Charles has not yet experienced is hitching a lift on a fishing boat – something that might be a little more possible in the islands then elsewhere.

As for the long-term future, he has no plans, but he thinks there’s three ways it could come to an end.

“I might push all my limits and visit every country in the world, then I’ll be finished. I might be blocked somewhere and unable to go further without paying, so I’ll have broken my rules.

“Or I might find a lovely place, with lovely people, and meet a lovely woman and then I will never go home. To be honest, my money is on the first option.”

You may spot Charles around the islands wearing waterproofs and a Mackenzie Hunting tartan kilt. You can follow him on social media by searching ‘Tour du monde sans argent’ (https://www.facebook.com/TourDuMondeSansArgent) or email him at This email address is being protected from spambots. You need JavaScript enabled to view it..