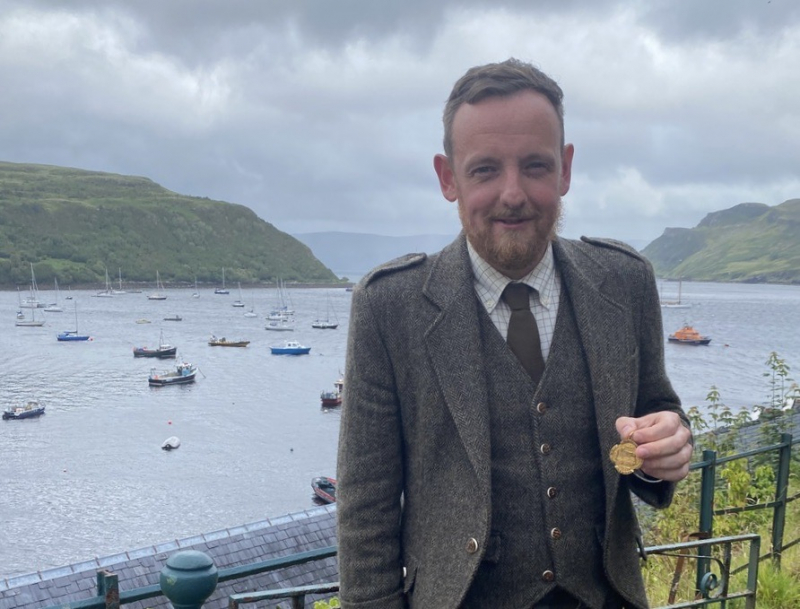 Lewis piper James Duncan MacKenzie has been named as this year’s winner of the Dunvegan Medal for piobaireachd at the annual Skye Gathering, after the competition yesterday (Tuesday 2 August) in the Skye Gathering Hall at Portree.

James, who comes from Back, won the competition in a bumper entry of 26 pipers for the first Dunvegan Medal competition to be held since 2019.

To participate, pipers must submit four tunes from a list of piobaireachds attributed to or closely associated with the MacCrimmon dynasty of pipers from Skye.

His rendition of the Lament for Rory MacLeod earned him the coveted medal, made of solid gold and first awarded in 1927. He was also third in the 6/8 March competition at the same event.

Piobaireachd (sometimes written as pibroch) literally means pipe-playing or pipe music, but is now used to describe the classical music of the great highland bagpipe.

Another name for it is ‘ceòl mór’ meaning ‘big music’, which distinguishes piobaireachd from all other forms of pipe music – such as marches, jigs and reels – referred to as ‘ceòl beag’, little music.

James’s medal win qualified him to play in yesterday evening’s clasp competition for previous winners of the Dunvegan Medal and also qualifies him for the Silver Chanter next year.

James started piping when he was eight years old, attending weekly chanter lessons in Barvas with schools piping instructor Nick Gordon. He soon moved onto the highland bagpipe and received further tuition from Pipe Major Iain Morrison of Back.

As well as competing at local competitions, he started performing publicly at piping recitals and ceilidhs in Stornoway, alongside some of the islands’ finest Gaelic singers and some of the top pipers from mainland Scotland. 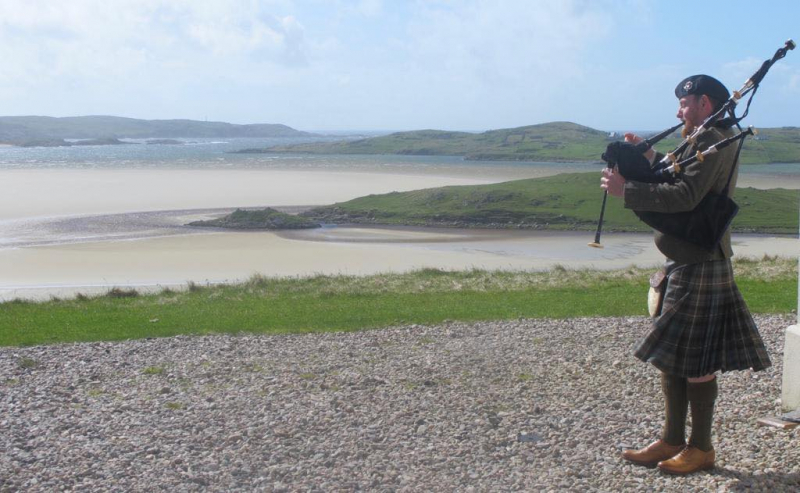 He studied for an HNC in traditional music at the University of the Highlands and Islands, Benbecula college and lived in Carinish, North Uist for a year.

At the college, he received his first introduction to wooden flute from Iain Macdonald, one of the tutors on the course, and was immediately fascinated with learning the instrument.

James joined Scottish folk band Breabach and toured with them internationally for 12 years, recording four studio albums with the band. He’s also recorded three solo albums, the latest of which, Fìbhig, features 19 tunes and one song, all composed and recorded by James from his home in Shawbost.

Most recently he performed with musical partners Norrie MacIver and Calum Alex Macmillan, as part of An Lanntair’s programme at HebCelt, as they presented Freumhan/Roots, a suite of traditional and newly-written music and song commissioned to celebrate HebCelt’s 25th anniversary.

The pictures show James with the Dunvegan Medal in Skye yesterday and playing to entertain visitors in Uig, Lewis earlier this year.