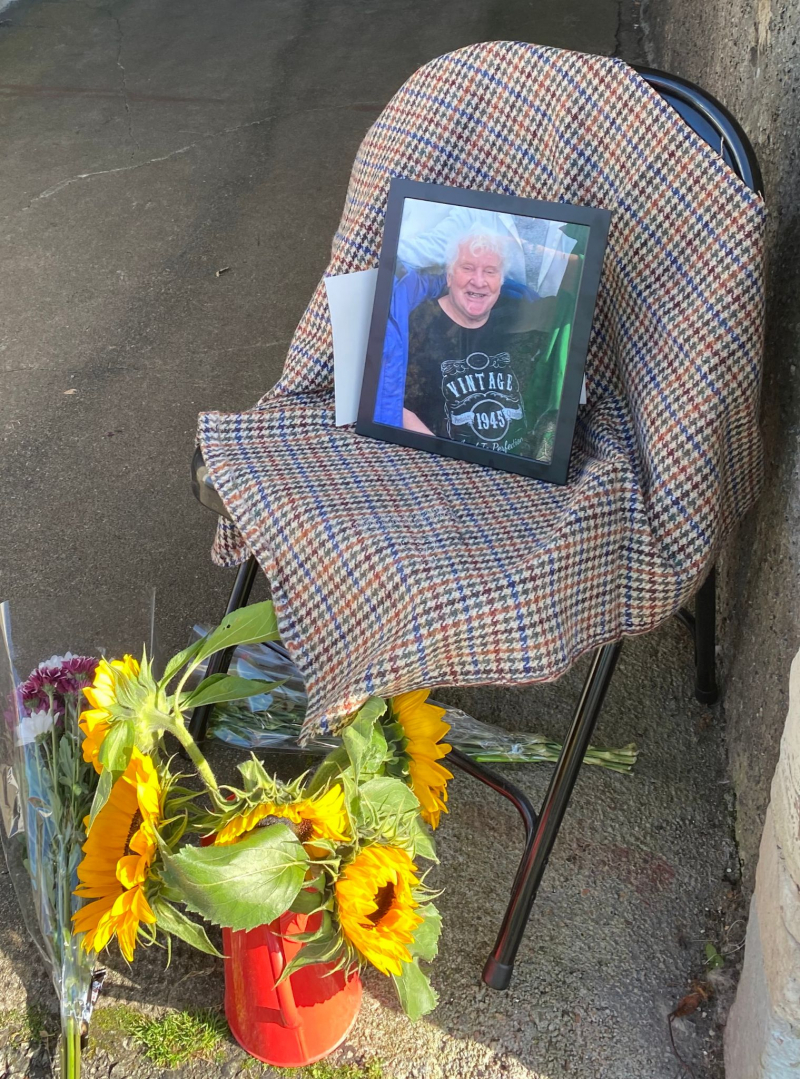 He was a delightful character, a friendly charming person who loved people and they loved him.

He would happily yarn away for hours in the shop or at his chair in Bayhead. Although, he was a good businessman, he would rather talk to his customers about the flora or fauna of Lewis and he would happily close his shop to take tourists down to the harbour to see the seals.

He was the David Attenborough of Stornoway. Ronnie's favourite expression was “You have to be kind.” The Lewis Loom Centre reflected him in every way by being a magical Aladdin's Cave, full of Harris Tweed cloth garments and numerous other smaller items of Harris Tweed - handbags, hats, gloves etc.  However he also had hundreds of interesting items unrelated to textiles which he would talk to visitors about.

Latterly, Ronnie suffered from very painful arthritis which prevented him demonstrating on his looms, wooden and Hattersley, weft winders, warp stakes, the making of Harris Tweed to groups and individuals.

His talks fascinated people and there were many tourists, bus parties and cruise ship passengers who left with an indelible impression of both Lewis Loom Centre and Ronnie. Ronnie had been well qualified to do this - probably the most qualified in the island. He himself said he had no interest in school, and was bored. As a teenager he took a summer job in the family Harris Tweed mill and suddenly found an interest and a passion which lasted this whole life - textiles.

He also had other interests. We were reminded last week that in the late 1960s Ronnie was the first DJ in Stornoway having turned the YMCA into an early disco with a reel-to-reel recorder, speakers and, unbelievably, a glitterball. It was however more SY Come Dancing than Strictly ...

He went to the Castle college and enjoyed his textile course which enabled him to go on the Scottish College of Textiles in Galashiels. Ronnie left Gala after three years, highly qualified as an Associate of the Textile Institute. This led to the position of mill manager in Ireland for two years but the call of home came with his appointment as lecturer in textiles at the Castle, where he had been a student. More than 20 years later, the department closed and Ronnie moved to Orkney, to teach knitting and other textiles in schools and the community.

Ronnie decided to return home and start the business which became the Lewis Loom Centre. This became well-known worldwide with tourists often returning to see him and the shop many times.  The building that housed the Loom Centre could well be the oldest building in town.

My sister Carol, his cousin, who has been in New Zealand for nearly 60 years, recently turned on their local radio station. She heard the NZ reporter stating: “I am here in the Outer Hebrides of Scotland in the Dickensian shop of Ronnie Mackenzie. Then she recognised Ronnie’s voice as he gave a long talk about harris Tweed."

Some time back the then Prince Charles and Camilla attended an HTA exhibition in Tarbert.  Ronnie was there with his historical pattern books dating back to the 1930s from the Loom Centre. Camilla, now Queen Consort, was fascinated by Ronnie's talk and no doubt with Ronnie himself. She said to her husband: “Come here and see Ronnie.” Typical Ronnie. The new King Charles was summoned to meet him. I thought it was meant to be the other way round.

Apart from this textile experience, Ronnie had a lot of interesting historical items which he would use in his talks and which often stray into any other subject on which Ronnie was usually expert.

Many tributes have been made - including on social media. See, for instance, the Harris Tweed authority Facebook page. HTA themselves said: “We are deeply saddened to learn of the passing this week about our dear friend Ronnie Mackenzie from the Lewis Loom Centre. Ronnie was a well-known local businessman with a charming personality, and he will  be missed by many. Our thoughts go out to his family and friends.” Many people have said that Bayhead will never seen the same without Ronnie's cheery wave and chat.

When his great grandfather Alexander Mackenzie moved to Stornoway from Crobeg, and built a business from herring and coal. For many years, the Mackenzie coal hulks appeared on navigation charts at Arnish. When he died, his two sons split the business with James (Jimmy) running the coal side. Kenneth continued in the fish business before starting the Harris Tweed business which became Kenneth Mackenzie Limited.

Jimmy’s son, also James (Jim), who was Ronnie's father by his mother Freda, came from Fife, later started a drapers business but following the legacy of a war wound died in the 1960s. Ronnie’s textile connections therefore back a long way.  An interesting note is that his cousin Christopher MacKenzie Geidt (Lord Geidt) has returned to his roots by buying Crobeg Farm.

Ronnie is survived by his son Andrew, his wife Margaret having deceased him far too young in 2000. A close family unit, this brought Ronnie and Andrew even closer and Andrew said this week: “He was the best dad ever.”

This tribute was from  Annismarie Macfarlane and the staff at the barber shop Back & Sides which was beside the Loom Centre in Bayhead. "Ronnie touched our lives more than he would have known. He was an amazing neighbour to have, from the stories and jokes he'd tell us to putting our bins out, buying us chocolates, and sending his customers in to see his "barber girls. His knowledge of our town and island was outstanding. There wasn't much Ronnie didn't know. He was a real asset to our community and Bayhead was very fortunate to have him.  Bayhead won't be the same again. We will certainly never forget him."

Ronnie was my cousin for three-quarters of a century and also my best friend. On that personal note, Ronnie was my best man in 1970 and everything went fine until at the end of his speech…he asked everyone to be upstanding for the toast and to “wish Rae and Nellie all the best ... for the next few years.”

For 51 years, I never let him forget it.