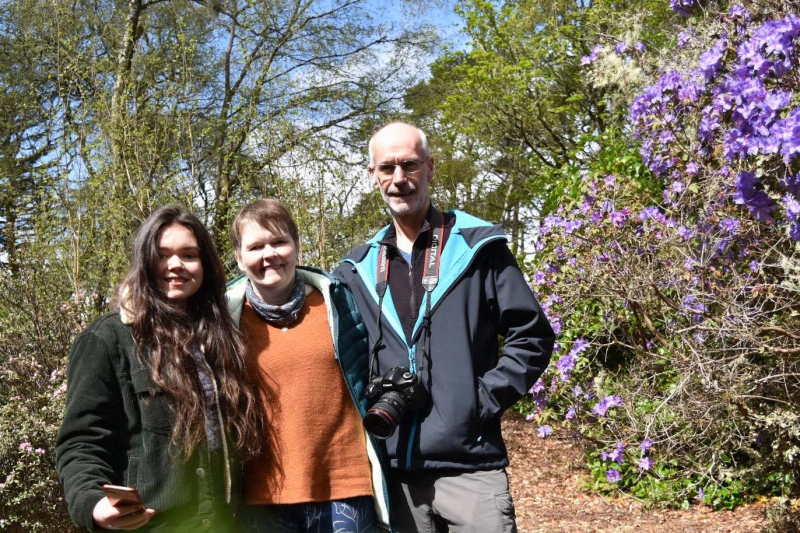 After waiting 15 years for a transplant, Lewis-born Margaret Meiklejohn, finally received a telephone call that changed her life forever; that a liver transplant match was waiting for her.

Margaret, who is retired and lives with her family in Strathnairn just outside of Inverness, explained how doctors had originally discovered a grapefruit sized lump in her stomach, later diagnosing Autosomal Dominant Polycystic Liver Disease (ADPLD).

Whilst most people have never heard of ADPLD and many health professionals had very little knowledge of the condition, the nearest ADPLD support group was then based in America. However, by carrying out some research Margaret discovered that the USA was trialling a drug called Ocreotide, which was believed could slow down cyst growth. Margaret then visited her GP with this information, who arranged a referral with Mr Wigmore, a Consultant at the Scottish Liver Transplant Unit (SLTU) based at the Royal Infirmary of Edinburgh.

“The consultant was confident that I would need a transplant at some point in the future but, because ADPLD is unlikely to cause liver failure, a transplant wouldn’t be considered until such time as the condition started to affect my quality of life, which he estimated would be in about 10 years. However, he did agree to me receiving the trial drug, which initially did help with slowing down the cyst growth.”

“At the time, my daughter Kirsteen was only in primary school, and I was relieved that I wouldn’t need a transplant for many years. As well as worrying about my own health, I was worried about my husband Doug, and daughter, and potentially what would happen to them if I did not survive the transplant operation. I also found it difficult to get my head around the idea of relying on someone else’s organs to keep me alive.”

When Margaret originally attended Raigmore Hospital to have her deroofing procedure, she was slim and a keen hill walker and gardener. However, six months later when she was informed the procedure had been unsuccessful, her fitness levels deteriorated, and she gained considerable weight due to liver growth and fluid retention.

“Within a year of my diagnosis I had to give up walking the hills and over the next three years my flower borders were turned over to lawn. I worked part-time as a cook in the local primary school but was feeling permanently exhausted; having to nap before going to work and then coming home to have a lie down, before cooking a meal for my family.

“When my daughter became a teenager, she naturally wanted to go to concerts, shopping and weekends away, but I just wasn’t well enough to do any of this with her. At the time these things creep up gradually and you don’t think anything of it, you don’t realise how much of your life you have lost. However, now when I look back, I realise I lost the entirety of my 50s to ADPLD.”

In April 2018, Margaret fell ill, with tests showing that a cyst had burst. Due to the infection this caused, she was given an MRI and her results sent to the consultant in Edinburgh. This was when she was given the news that she required to be assessed for transplant. Four months later, she attended the SLTD for a week to review her eligibility and, although being severely malnourished due to her stomach being crushed by her now enormous liver (weighing approximately three stone), Margaret went ‘live’ on the national transplant list on 12th August 2018.

She recalled: ““I had six months of being fed by a nasal gastric tube plus daily supplements, in order to get me fit enough to survive the operation. In addition, one year after going on the waiting list, the weight of my liver caused my spine to fracture which left me house bound. Whilst I could manage to get around indoors by holding on to furniture, I had to use a wheelchair at any time I left the house.

“Life on the waiting list is very hard; you are virtually tied to your phone and your heart misses a beat each time the phone rings, although you are both longing for the call and dreading it at the same time. For me, at the back of my mind there was always the thought I might not survive the op so I spent ages sorting through stuff so my family wouldn’t have to do it when I was gone.

“We also weren’t able to go away on holiday unless it was a maximum of three hours’ drive from Edinburgh. This was difficult as I wasn’t able to go home to Lewis to visit my elderly mother and siblings, in case I received the call and would have to travel to the Royal Infirmary of Edinburgh at a moment’s notice.”

Margaret had one false alarm during the early hours in December 2019. After receiving the call that a liver was available and travelling all the way to Edinburgh in wintry conditions, when she arrived there was some ambiguity about the donor’s medical history, so after waiting eight hours whilst testing was carried out, was told it could not be used. However, she remembers feeling a strange mixture of despondency and also being elated that she wouldn’t miss Christmas!

Nine months later, one evening in early September 2020, Margaret received a call from the Transplant Team that a liver was available, and she was to make her way to Edinburgh as soon as possible. However, due to her own liver being so enlarged, the Transplant Team knew that her procedure was going to be particularly tricky.

The following day, Margaret attended theatre at noon and it was close to midnight before the surgeon told her husband that the transplant has been successful. However, due to several complications she had to return to theatre a number of times over the following week, before spending 11 days in the Intensive Care Unit, 10 days on intubation, and spending a total of five weeks in hospital before being discharged.

Margaret’s recovery has been nothing short of amazing.

“Because I spent so many weeks in hospital, by the time I was discharged they were confident that my new liver had settled and was working well. In fact, I was doing so well that the usual weekly visits to the clinic weren’t necessary, and I graduated to monthly visits straight away!

“When I look at where I am now, I have to pinch myself. The wheelchair is gone. I’m able to wash and dress myself. My appetite is back, I’m walking (but no hills yet!), and I’m reclaiming my garden. I can look after myself, so much so that my husband has been able to return to his work full-time.

“I intend to make the most of the gift I’ve been given. Spend more time with my family and catch up on all these years that we as a family missed out on. I feel incredibly bound to my donor’s family. I know nothing about them and yet they were brave enough, even whilst grieving, to honour her wishes and give me, and possibly many others, a second chance at life. I feel so grateful and very honoured to have received her liver.”

Margaret has shared her story to encourage individuals to have these discussions with their loved ones now, before it’s too late, and to let them know what their wishes are in order to help others have a second chance at life when they are gone.

New figures released to coincide with Organ and Tissue Donation Week (26 September – 02 October) reveal that 47.7 per cent of people in the NHS Western Isles area have now registered their donation decision.

Of that figure, 44.3 per cent have recorded their decision to be a donor on the NHS Organ Donor Register, with 3.4 per cent choosing to opt out.

In Scotland, everyone has a choice when it comes to organ and tissue donation - to be a donor, or to opt out.

If people aged 16 and over choose to do nothing, it is assumed they agree to be a donor if they die in circumstances where donation is possible, unless they are in a group for whom the opt out system does not apply or it would be against their views.

Dr Francis McAuley, NHS Western Isles Medical Director, said:  “In Scotland, around 500 people on average are waiting on an organ transplant, however only around one per cent of people die in a way that makes organ donation possible.

“That means every opportunity for donation is precious. I’d encourage people to help make Organ and Tissue Donation Week count by recording their decision and sharing it with family and friends.”

Minister for Public Health, Maree Todd, said: “There are so many inspiring stories which show the difference a transplant can make to someone’s life.

“Donation remains a personal decision, but whatever you decide, recording it and sharing it with loved ones can make it easier for them to ensure it is honoured.  I hope Organ and Tissue Donation Week prompts more of those important conversations.”

People can register their donation decision and find out more at www.organdonation.scot or by calling 0300 123 2323.