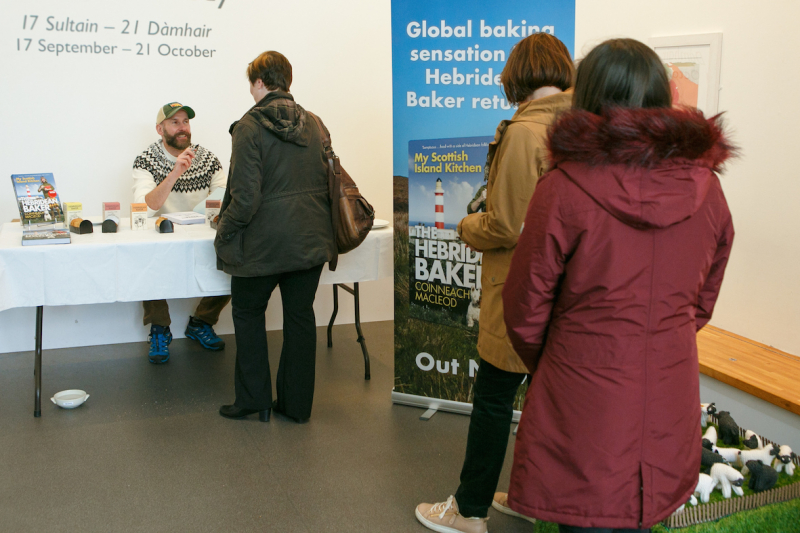 Coinneach MacLeod, now known worldwide as the Hebridean Baker, held the local launch of his second cookbook in Stornoway on Thursday September 29.

Those who attended not only got their copies of My Scottish Island Kitchen signed but some also got the chance to sample his produce which are now being distributed around the UK in a deal with island company, Stag Bakeries.

His first book became the bestselling Scottish cookbook of 2021.

Coinneach, who previously worked at Celtic Football Club, is also a sports development officer with the Union of European Football Associations, (UEFA, a job which takes him around the world.

“I was commercial manager at Celtic, and absolutely loved working in the east end of Glasgow,” he says. “I enjoyed my time at the club.”

Now he is working in developing countries, and once his book tour is over, he is heading out to Kazakhstan and Indonesia.

Although he has an MA in Old Icelandic Studies from Glasgow University, a field of study which he doesn't quite remember why it was his choice. It made sense at the time in his head because Lewis is closer to the south coast of Iceland than the south coast of England.

Coinneach has had a passion for home baking all his life, taught by his mother and aunties, particularly traditional island recipes, pancakes, scones. However, it was not until the first pandemic lockdown in 2020 that he started making videos and posting them online.

He says the the idea came from being in his aunt Bellag's house and there was a duff - the island name for clootie dumpling - bubbling on the stove.

Before long, 21 million people had watched the videos.

"I know there are not 21 million people on Lewis so these wee stories have gone around the world.”

He says he is inspired by old cookbooks, like Scots Kitchen by F Marian McNeill, and other, more obscure ones like The Practice of Cookery, by Mrs Dalgairns, from 1829.

Now his most favoured recipes include Stornoway Scotch Eggs to Caledonian Cream, Posh Mince and Tatties and Shortbread Dips.

Recently on holiday in New York, he was on Fifth Avenue when a fan on the street congratulated him.

“It still shocks me when someone recognises me on Byres Road, or in the Co-op in Stornoway. So to have it happen in New York is something else."