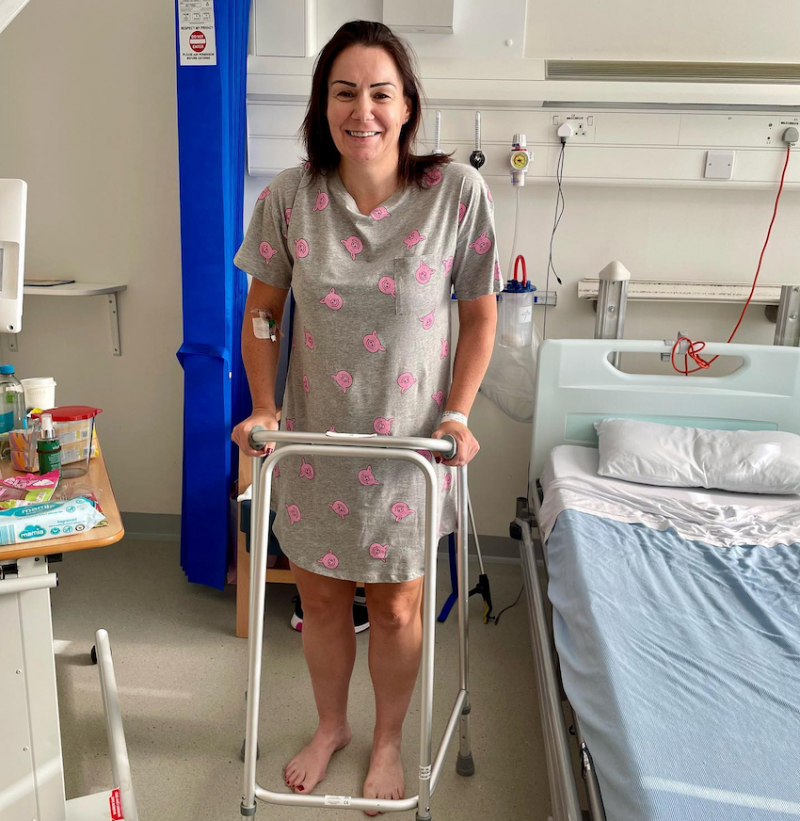 Record-breaking cyclist back on her feet

Record-holding Stornoway cyclist Christina Mackenzie is back on her feet and smiling again, after a horrific road accident left her sprawled on the road with serious injuries on Tuesday 27 September.

Christina, who holds numerous road-racing cycle records, is showing typical fighting spirit by moving as fast as she can towards recovery.

The Western Isles Island Games Association team manager was training in daylight near her home in Stirling when she was bowled over by a passing motorist in a hit-and-run accident.

The driver concerned sped off, leaving her badly injured on the A811 road west of Stirling, near to the Kippen roundabout, with severe injuries including several breaks in her pelvis.

Her race page on Facebook (https://www.facebook.com/Lejogmack) was used to alert friends and followers to the traumatic incident, which saw her knocked off her bike by the driver of an SUV towing a high-sided agricultural trailer.

Last week she told media how the vehicle passed her on the inside, hitting her once with the vehicle itself, and then side-swiping her with its trailer.

Christina remained conscious throughout the moments of the collision and is certain that the driver was aware of the impacts. She has offered public thanks to the drivers who stopped to help her, but she’s also appealing to the driver to contact police.

On Thursday (29 September) from her bed at Forth Valley Royal Hospital, she posted a message of thanks to friends and followers who had sent kind wishes and words of comfort.

But, she said: “Nearly 48 hours after the incident, I am still in excruciating pain and have no mobility whatsoever.

“Everyday tasks have become my new challenge. After consultation with orthopaedics, I can avoid surgery and am now awaiting an assessment from the physio to discuss my recovery. One day at a time.”

Yesterday’s news was brighter, as Christina was allowed to get out of bed to shower and test her legs.

Posting a picture showing her walking frame beside the hospital bed, she said: “My new wheels! After three days with no mobility and severe pain, it was great to finally get out of bed, shuffle and shower.

“Who needs Lycra when a Marks and Spencer Percy Pig nightie puts a smile on your face?”

Christina, who rides with Stirling Bike Club, holds the women’s solo record for the fastest completion of the Land’s End to John O’ Groats ride, and the record for the North Coast 500, which she set earlier this year.

A report on the cyclist’s website road.cc (https://road.cc/content/news/christina-mackenzie-injured-hit-and-run-motorist-296253) said the crash has scuppered the end of ‘a sensational year’ for the Scottish endurance athlete.

In August she became the new Scottish 100-mile time trial champion, and last month she lifted the national title in Wales at the RTTA National 12-hour championships, completing 263 miles in 12 hours and smashing the course record.

She’s due to travel with the Western Isles Island Games Team to Guernsey in July next year for the NatWest Island Games.

Team-mates at WIIGA said: “All involved with WIIGA are shocked by this news and wish Christina a full and speedy recovery.”

A Police Scotland spokesperson said: “We were called around 5.05pm on Tuesday, September 27, to a report of a crash involving a cyclist and a car towing a trailer which failed to stop on the B822 at the Kippen roundabout, Stirling.

“The cyclist, a 45-year-old woman, was taken to Forth Valley Royal Hospital for treatment.

“Enquiries are ongoing to trace the driver and anyone with information that could help, including dash-cam footage, is asked to contact Police Scotland.”

Eyewitnesses or anyone with information have been told to contact police on 101, quoting incident number 2444 of Tuesday, September 27.

Pictures show Christina during her record-breaking North Coast 5000 ride in May this year, in her hospital bed and on her feet again over the weekend (Christina Mackenzie).