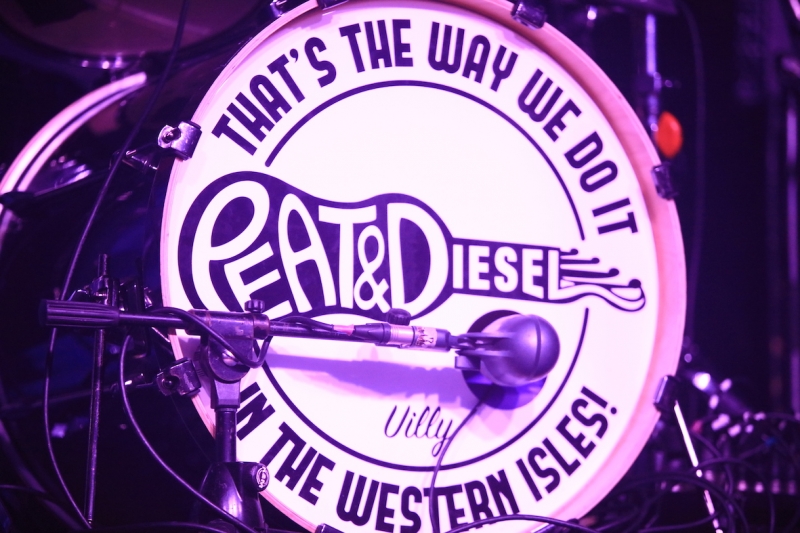 In January Celtic Connections, regarded as Europe's premier folk and roots music festival, will present its renowned education programme in person for the first time since January 2020.

And Stornoway's Peat & Diesel will be the front-line stars.

Since it started in 1999 over 200,000 children from all over Scotland have benefited from the programme, including some of the professional musicians we see on stages across the festival nowadays.

Over 6000 children from across Scotland will attend three free schools concerts at the Glasgow Royal Concert Hall this winter.

The incredible Peat & Diesel will showcase their award-winning live performance to thousands of schoolchildren on Friday 20 January.

Opening for Peat & Diesel will be Ron Jappy and Rachel Hair who will perform an exciting array of traditional tunes on clarsach and guitar.

Québec’s Le Vent Du Nord will entertain the young crowds with their high energy and rocking performance. Although rooted in the Celtic diaspora, Le Vent Du Nord’s sound has a vast range of global influences and their incomparable live performance at previous school concerts has had teachers and pupils dancing in the aisles.

Opening this show will be the St Roch’s Céilí Band. Formed over 40 years ago by Frank McArdle as a lunchtime club in a Royston secondary school, this organisation is now responsible for teaching traditional music to hundreds of children across Glasgow.

The third and final schools concert will be a joint celebration that marks Celtic Connections’ 30th edition but also its pioneering education programme. Over 30 young musicians will come together from regions across Scotland, showcasing their home traditions before premièring a brand-new ensemble composition by Treacherous Orchestra co-founder John Somerville.

John Somerville, said: “The Celtic Connections education programme has always been the jewel in the crown of the festival, not only does it inspire future generations of musicians but it also gives young people the opportunity to experience live music in an incredible setting like the Glasgow Royal Concert hall - an opportunity they may not have had otherwise.

“Playing a Celtic Connections schools concert to thousands of kids is absolutely unforgettable, you will never hear cheers like it or feel an energy similar, you literally feel how Ed Sheeran must feel walking out onto that stage and I can’t wait for the thirty young musicians with me on this bill to feel the same.”

Joining John and the young musicians on the final schools concert will be Scottish super group Session A9 who will delight the young audience with their high-energy, rocking performance.

In addition to this series of concerts, there will also be a series of taster workshops taking place in schools across Glasgow. Professional celtic musicians will introduce a variety of traditional means of expression to children, including Scots and Gaelic song, piping demonstrations and workshops, scottish step dance, alongside instrumental tuition featuring the tin whistle, bodhran, fiddle and clarsach. These workshops are all delivered free of charge and are completely inclusive.

There will also be a host of weekend workshops for the whole family to enjoy throughout the festival, these will include Gaelic, Gospel and Scots song, as well as a family ceilidh that will all take place in the beautiful surroundings of Kelvingrove Art Gallery and Museum.

For pre-school ages and babies, there will also be the very special Moon Dragon classes. These interactive workshops carry their young audience on a journey of discovery as they watch and interact with Bertie the Moon Dragon, Mrs Unicorn, the Owls and Frogs all trying to find the Moon and to get him to rise in time for the night. Rachel Huggins and Corrina Hewat bring live music together with catchy tunes, magical storytelling and the simple but effective story of Bertie the Moon Dragon to young audiences.

Donald Shaw, Creative Producer of Celtic Connections, said: “When I was growing up carrying a fiddle or an accordion on your back was considered really uncool but over the last number of years this has completely changed - we see so many young people with a desire to learn an instrument, which is heart-warming to see. I do think that this is in part thanks to the work that has been done by the likes of the Celtic Connections education programme and the Fèisean movement across Scotland.

“It’s really quite mind-blowing to think that over the last two decades over 200,000 children have had the opportunity to enjoy the generosity of so many iconic and amazing bands and artists who have given freely of their time for school concerts at the festival over the years. I’m sure that this experience has been the inspiration for many to go on and become great musicians themselves.”

Chair of Glasgow Life, Bailie Annette Christie said: “The importance of music to the personal development of children is well documented. Countless studies have recognised the incredibly positive impact that music has on the young mind and emphasised its positive benefits to the wellbeing of young people.  That’s why the outstanding legacy of educational programmes that Celtic Connections has created over the years is so vital.

“The wide range of activities and performances delivered through these in previous festivals has benefited a truly impressive number of children, not only from Glasgow but right across Scotland. The 2023 educational programme will delight and inspire many more, once again providing an invaluable impact.”

Celtic Connections will take place between Thursday 19 January – Sunday 5 February 2023. The internationally renowned event will mark its 30th edition with an exciting and varied programme of music. Over the course of the 18-day event, thousands of musicians will perform at venues across the city with concerts and performances spanning traditional folk, roots, Americana, jazz, soul and world music.

Tickets for Celtic Connections 2023 are available from www.celticconnections.com.