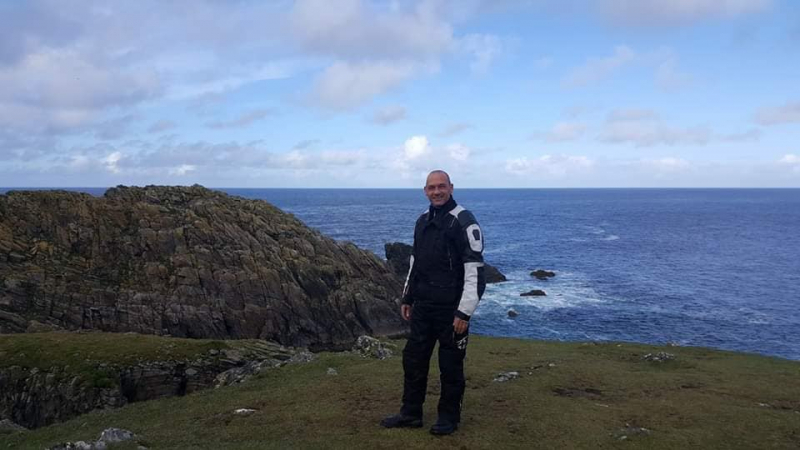 A biker involved in an accident on the main Ness to Stornoway road more than a month ago is showing signs of recovery from catastrophic injuries.

60-year-old Billy Shanks was on his bike around 7.30am on Friday 14 October when he was reportedly in collision with a deer.

The accident closed the road for almost a full day and Billy suffered a traumatic brain injury.

He was airlifted from the scene to Western Isles Hospital and later on to Glasgow Royal Infirmary, where he remained in a very serious condition, kept in a coma and on life support.

But yesterday (Monday 21 November) Billy’s daughter Milly Shanks shared the astonishing news that her dad was beginning to show strong signs of recovery – including talking coherently to relatives at his bedside.

Milly had been helped with the costs of staying in Glasgow to be with her dad after a gofundme page was launched by friends at https://www.gofundme.com/f/please-donate-to-help-milly-her-family

To date over £3,250 has been raised to meet the costs of travel and accommodation, allowing Milly to stay by her dad’s bed as he fought to stay alive.

It was that help from friends which led Milly to post on Western Isles Noticeboard yesterday, saying: “I feel like I owe everyone an update on my dad.

“He’s alive and kicking (literally). After a week of hell he decided to wake up and start talking. He is a miracle.”

Milly and her family had been told that Billy simply could not survive without a ventilator and endured six days ‘waiting for him to slip away’ after the equipment was switched off.

Instead, said Milly: “On day six, his breathing improved. I got a call that same day saying to hurry in, as he was going to die. I got there and his eyes opened, but this time there was life behind them.

“The day after he was moving way more and then the next he spoke and had a full conversation with us.

“I thought I’d never get to hear him say ‘I love you’ again, but now I can. He’s still not okay as his confusion is bad right now and he is still bed-bound, but from being told he can’t survive, or he’d be paralysed, this is amazing.

“I can’t thank the people who donated to the gofundme enough. It meant I could be with my dad during the hardest time of his and my life.

“If I could thank everyone individually I would. I would also like to thank the minister in Ness for the prayers every Sunday and the people who were there on the 14th and saved my dad’s life. The love in this world is insane.”

One urgent and serious message that Milly has for bikers is to make sure their safety awareness is always uppermost in their minds.

She said: “If you drop or knock your helmet it must be replaced before you get back on the bike. I think this why my dad got his injuries, as he didn’t replace it since he slipped on the ice.

“If I had it my own way I’d stop everyone from getting on a bike, but I can’t do that, so at least try to be safe.”

The picture shows Billy Shanks in his leathers before his accident (Milly Shanks).