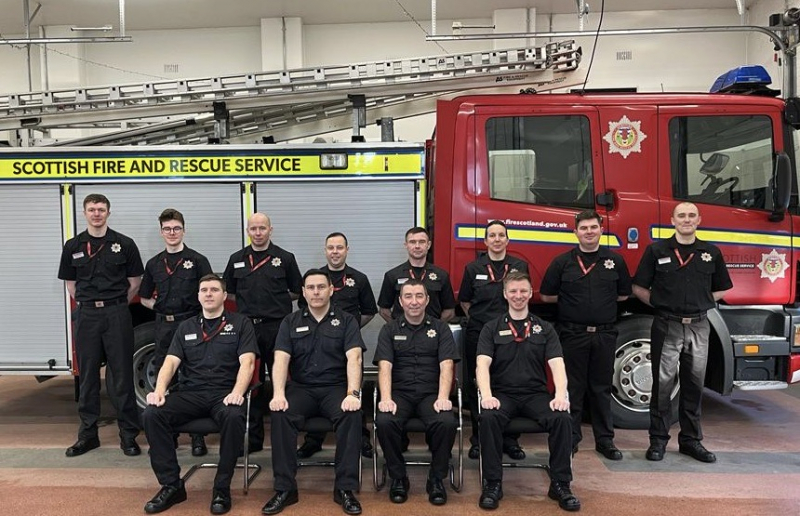 Three firefighters who had only just qualified to serve with the Scottish Fire and Rescue Service were in action on their first day in the job on Saturday (21 January).

They were called to help deal with loose roofing sheets on a commercial building on Shell Street in Stornoway, which had been loosened by high winds and were in danger of creating a hazard to surrounding buildings and people.

Stornoway fire crews put a ladder up to help secure the roofing and remove loose sheets from the area.

The three new firefighters were part of a cohort of eight, from five communities across the Western Isles, who had completed task and task management skills training – the initial basic qualification for active service – on Friday.

They included the three trainees for Stornoway fire station, two for South Lochs and one each for Shawbost, Bayhead in Uist and for Barra fire station.

All undertook a two-week training course and are now deployed in their local stations at the start of a development period serving with Scottish Fire and Rescue Service.

Western Isles training watch commander Andrew O’Donnell said: “This is the second intake of new firefighters we have had recently, with 15 who completed training in August and another course due to begin in April, once practical selection tests for that intake have been completed.

“The eight have shown great enthusiasm to learn a vast amount of new knowledge and practical skills, as well as showing strong team-working ethics which will stand them in good stead to be valued safe crew members for their new stations.

“They now begin a period of on-task training where they are able to respond with their teams to shouts, such as the one which the Stornoway team attended on Saturday.

“They’ll need to act under supervision from fully-qualified retained firefighters while they complete a three-year development period.

“They next need to complete a breathing apparatus training course, after which they will be qualified to take an active role during a fire.”

(This report has been updated and corrected since first being published)