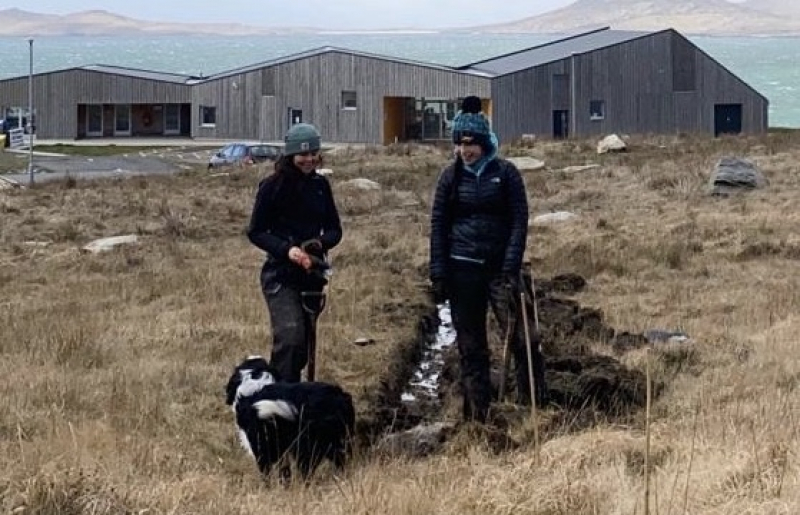 New ideas are sprouting in West Harris, and new people are in place to make sure they’re carefully tended and developed.

The West Harris Trust has new workers and a new community growing project under way, with land last used for growing many decades ago, now set to be planted and harvested once again.

They’ve been in post since November last year and, working with Clara Risi, the John Muir Trust ranger for Harris, the pair have put in hand a project which will address social isolation, bring people together and allow skills to be handed down the generations.

The community growing project has money from the Crown Estate, CalMac Community Fund and the Baillie Gilford Foundation and with that the first four raised beds have already been constructed, on land just uphill and south of Talla na Mara in Nisabost.

Iain said: “The four beds are the beginning of the project, on a piece of land which is now being fenced, and we are also to have a polycrub installed in July, but we’re looking to get people together for our first planting in the next couple of weeks.”

In fact the first session will come on Wednesday (12 May) when signed up volunteers will get together to discuss their priorities and wishes for the community garden. 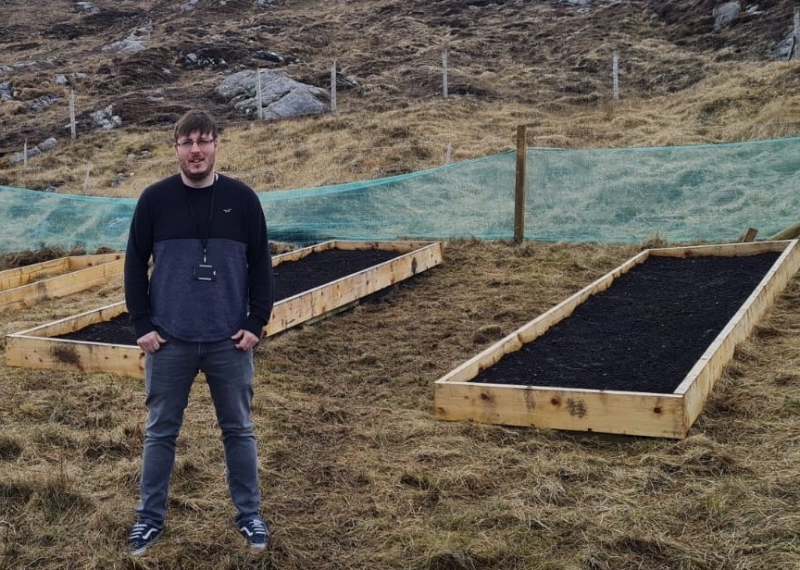 Iain said: “We’re holding a community-led garden afternoon and we hope that will set the tone for the project.

“We want to focus on skill-sharing, sharing local customs and history and making the garden into a place where people can come and get together to make something positive happen, improving their own sense of well-being at the same time.”

The site is obviously a very exposed, west-facing hillside site, but it was always used for crop-growing and Romy says the advantages discovered by previous generations are still there.

She said: “Some of the land where we are growing used to be lazy-beds and, when we are digging, you can see the evidence of the land having been improved. The raised part is less clayey and the matter has broken down to make the soil structure crumbly.

“It’s elevated land, with rock behind it so there are natural watercourses, but we decided not to go back to lazy-bed cultivation  because, having done it on my own croft, I am not sure the volunteers would appreciate the back-breaking work!

“Instead we put the raised beds on the top and we had some lovely local topsoil donated by Angus and Johnny Mackay from Horgabost. We now have millions of potatoes to put in – Maris Pipers and Sharpe’s Express because they’re particular favourites of some of our volunteers, but also some Dunluce and Spa.”

The productivity of the land will be one measure of success, but Iain’s also keen to see less tangible, just as enriching results.

He said: “The first meeting on 12 May is for signed up volunteers, but from 19 May the afternoons will be the chance for people to get together, socialise, share skills and have a few yarns. Perhaps the older residents will have a few hints and tips for the younger ones.”

Pictures show Clara and Romy with their ‘unofficial mascot’ Dougal, hard at work on the site of the new community garden, and Iain Maciver with some of the new raised beds.