Ballet début no one thought possible… 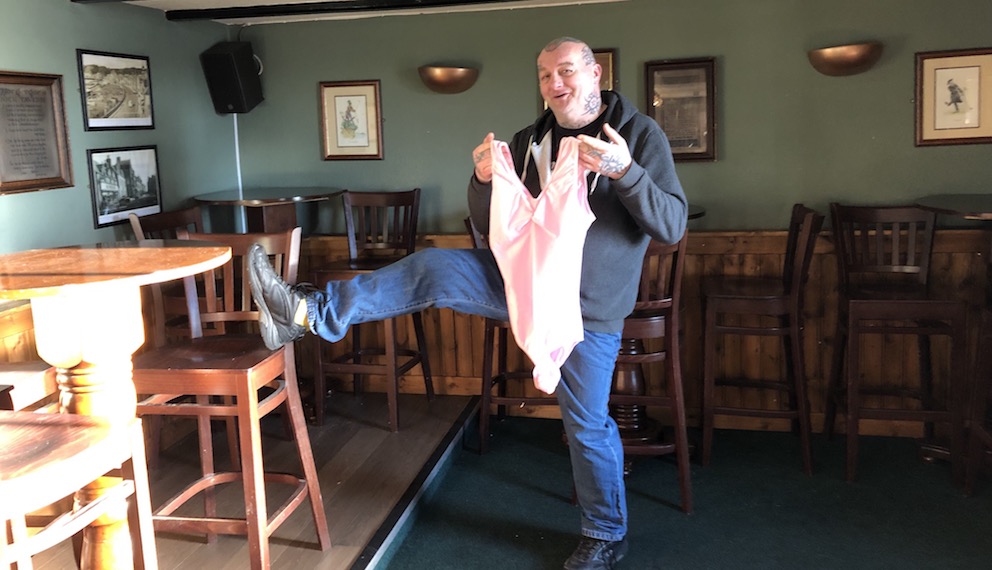 But this will only happen if you pay to get him on stage at An Lanntair next month (December).

And no one is saying how much you would have to pay to stop him!

But it’s all in good cause for Carl, seen above getting ready to look the part.

The Nutcracker, presented by Ballet Hebrides, is raising money in aid of Action for Children Eilean Siar

The story is…”As night draws in after her annual Christmas party, the Lady of the House is transformed into a magical sugarplum fairy!

“Join her on a journey to the land of dreams where you will meet dancing snowflakes, sparkling angels and surprises from far off lands.”

Oh sorry…that’s the story of part of the Nutcracker interpreted by Pyotr Ilyich Tchaikovsky.

You were wanting to hear how ‘Crazy Carl” – famous for his roles on Isles FM and at various town centre centres of entertainment – decided to expand a career that has seen several walk-on parts on stage, in films and on TV, to include a ballet role.

So we asked him

“I have been invited by Ballet Hebrides to appear in the Nutcracker as the Sugarplum Fairy.

“It’s a once-in-a-lifetime experience.  One of the things I thought I would never, ever say is: ‘I have got to go to ballet classes.’

“What happened was, we played an interview on Isles FM for Ballet Hebrides, advertising their Christmas event.

“Me being me, I might have mentioned the ballet a few times saying it would be ridiculous for me to take part as you would have to dress me as something like a cherub and then you would have to hire a crane just to lower me in.”

Next thing, Carl gets a call from Claire Whyman of Ballet Hebrides saying “Would you like to be in the Ballet?” and he said No, and No again and then she mentioned it was for charity, and that was it, argument over, the die was set and Carl joined the cast.

Just one thing again, though.  A total of £500 has to be raised in aid of Action for Children Eilean Siar to get him to actually appear.

Ballet Hebrides is an amateur dance group based on the Isle of Lewis. They welcome dancers from a variety of backgrounds and abilities from beginner to ex-professional.

The ballet is on at An Lanntair arts centre