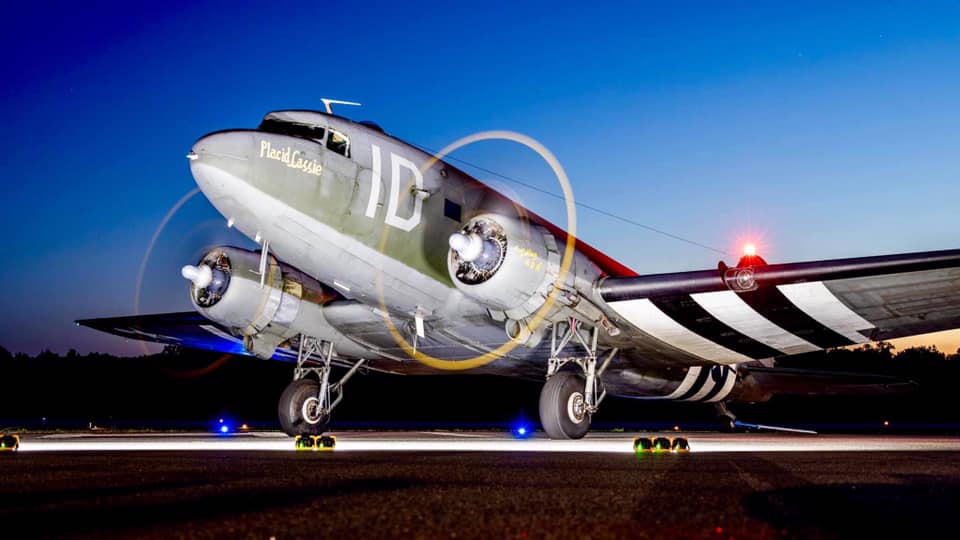 The unmistakeable sound of Second World War aircraft is due overhead above North Lewis this afternoon (Wednesday May 22nd) with at least three vintage planes heading this way from Iceland.

The 75th Anniversary of D Day on June 6th this year is bringing a collection of vintage Douglas C47s to Prestwick, on their way to commemorate the liberation of France in Normandy. They’re navigating from Reykjavik in Iceland, using the air traffic beacon at Bayble in Point, and there are currently three of the squadron airborne between Reykjavik and Scotland – ‘Miss Virginia’, squad leader ‘Placid Lassie’ (pictured above) and the famous ‘That’s All Brother’, pictured below (Photograph by Eric Pagelu)

Closest to the islands as of 1pm is ‘Miss Virginia’ and, although low cloud today makes it unlikely she’ll be visible from the ground, avid skywatchers are hoping for cloud-breaks at just the right moment for a glimpse and a picture.

The American-based D Day Squadron are part of the Tunison Foundation, a foundation which organises and supports living history events using airworthy historic craft. Fifteen aircraft will form the American contingent, with the lead aircraft the Placid Lassie, which was part of the original operation to drop 24,000 paratroopers into Normandy.

The fly-past during the D Day commemorations has been code-named ‘Daks over Normandy,’ since the same aircraft, when used by British and Commonwealth forces during the war, were known as Dakotas.

Placid Lassie leads a squadron including Betsy’s Biscuit Bomber, Miss Virginia and D-Day Doll. Some of the flight have been held back at their starting point in Goose Bay, Canada, because of weather conditions and there are some concerns about the originally-planned route via Greenland due to strong winds forecast in the Arctic region.

The staggered departure from Canada means more chances to see at least one of the planes, as individuals could be overhead at any time over the next two days. Stornoway is also a natural stopping point if fuel or technical issues affect the planes on their south-east route.

An aviation enthusiast from Stornoway told welovestornoway.com today: “Aircraft on the route from Reykjavik navigate using the beacon at Bayble as guidance. If there’s a southerly wind against them they are also likely to have fuel issues, and if that, or any technical issue, affects them, we are the first point of landfall after Iceland. We have a long runway and are in a direct line from Reykjavik, so there is a chance we may see one or more of the planes landing here for assistance.”

The squad’s due to gather at Prestwick on Friday and Saturday (May 24th and 25th), when they’ll participate in ‘Daks over Prestwick’ before heading to Duxford Airfield, north of London, to position themselves with the entire international C-47 fleet for the final leg to Normandy on June 6th.