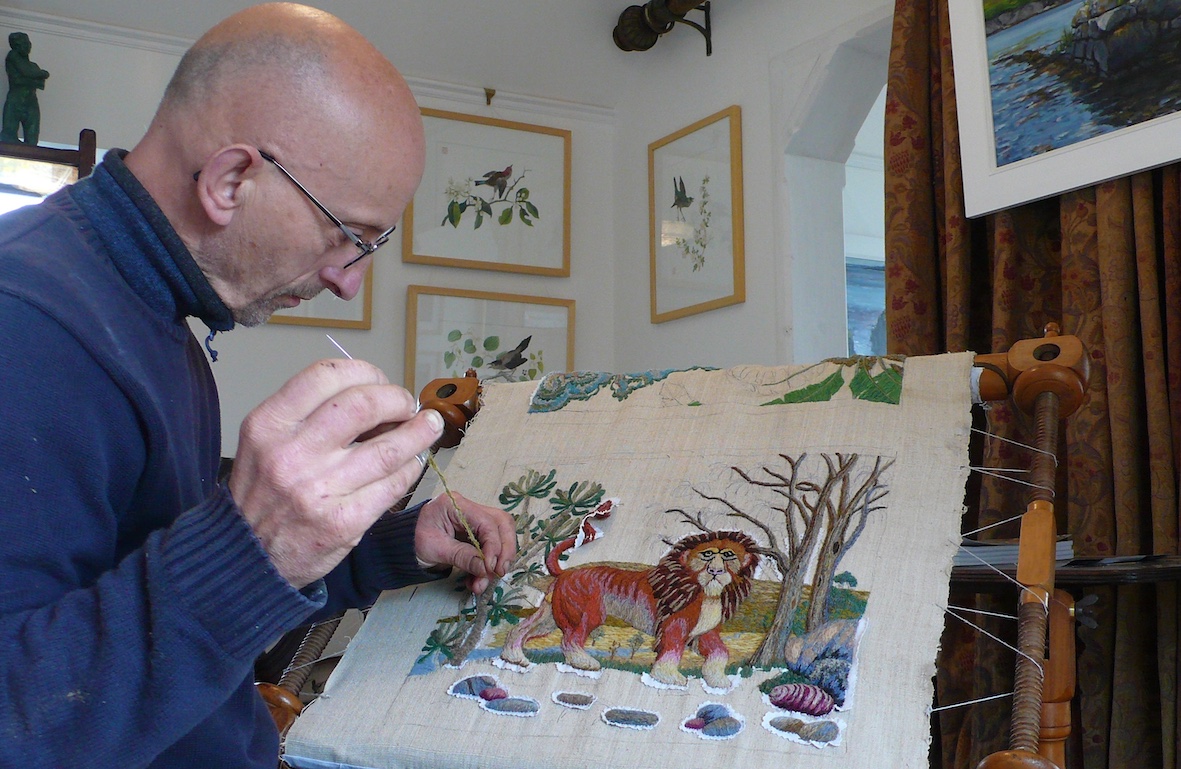 All that I do, by Tolsta-based artist

Creating has become a way of life for self-taught artist Tom Hickman – from wool-work pictures to dry-stone walls and everything in between.

Working from his home in North Tolsta, whatever the material, Tom follows his impulse create; to capture the whimsical and express the emotional.

Tom Hickman said: “As to why become an artist, I don’t think I had any choice in the matter, it was my destiny and whatever else I did in life, whether that be ballet dancer or hill sheep farmer, eventually I would have to accept that I was an artist.

“In a world full of suffering I find art makes it a little more bearable, And so, I make things, all sorts of things.”

An exhibition of Tom’s work – entitled ‘All That I Do’ – opens at An Lanntair gallery in Stornoway on Friday, August 23, 5pm.

As much an homage and testament to an extraordinary artist and collector, the core of ‘All That I Do’ is a series of gorgeous, narrative stump-work embroideries of biblical scenes, from the Garden of Eden to Noah’s Ark to the Nativity.

Also displayed will be a wide range of Tom’s unusual and esoteric works. These include furniture pieces, naïve folk art and complex and beautiful assemblages created from shells from South West Australia to North West Scotland.

Tom Hickman grew up in the ‘50s with hill sheep on the Mull of Kintyre, and a decade later the Cotswolds, and finally Cornwall.

After graduating in agricultural chemistry – “a dead end” – he became an antiques and fine art dealer, moving into theatre and interior decorating. He has worked in schools in England, Brittany and Western Australia and run two galleries, in Frome and in Central Finistere. In 2005 he bought a croft-house and barn in Tolsta - later discovering that his father had taken a photograph of the same spot on a visit several decades earlier.

Tom has exhibited widely throughout Great Britain, Western Australia and France and travelled to Canada, USA, South Africa and Japan.

His work is as diverse as his interests: mainly oils but also wood, ceramic and all manner of natural detritus such as feathers, shells and - since his time in the Hebrides - wool: from the sheep on the croft to the myriad of coloured yarn used in Harris Tweed.

Tom’s painting is self-taught through a life of constant and continuing observation. He has no formal training in art: “not even an ‘O’ level.

‘All That I Do’ opens at An Lanntair arts centre, Stornoway, on Friday, August 23, 5pm – all are welcome to attend.

The exhibition will run from August 24 to October 5.