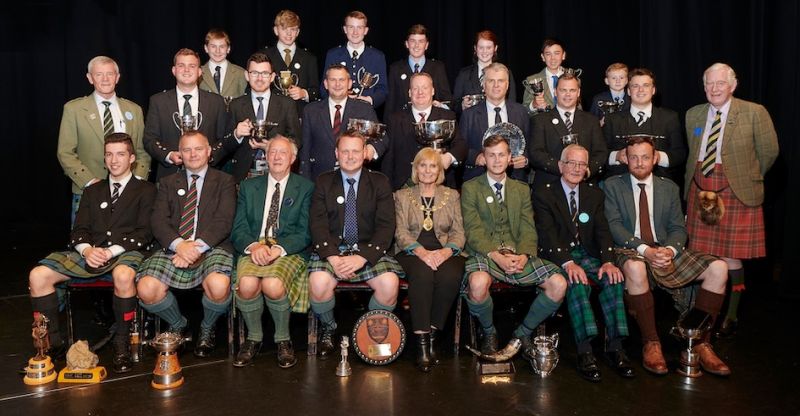 The Lewis and Harris Piping Society would like to congratulate piper James Mackenzie on winning the Silver Medal for piobaireachd at the Northern Meeting in Inverness.

James, 30, who comes from Back and plays with contemporary folk band Breabach, won the traditional solo competition at the event on Thursday, August 29.

“We remember James very clearly when he was a youngster playing in junior competitions and also at the regular recitals that the Society used to organise. He has subsequently made a name for himself both nationally and internationally playing with Breabach.

“I spoke to him at lunchtime just before he was due to go on to play in the competition and he confessed to being very nervous. A friend of mine also spoke to him and was surprised that he was so nervous, considering he is well accustomed to playing in front of thousands with the band. I assured him that a little bit of adrenalin coursing through his veins would not do him any harm.

“There is no doubt that in recent years there has been a trend for pipers to play in bands with other instruments and there are several examples of that, with some very good pipers playing in bands. But the traditional individual performance of piobaireachd is a different art form and I guess that playing in front of three old men with their arms folded across their chests and pens poised, ready to note down any missed grace note, is just as challenging, if not more so, than playing in a band.”

Dr Smith added: “Having won the Silver Medal, James now qualifies to play in the Gold Medal competitions if he so wishes next year. We sincerely hope that he will continue to develop his skills and achieve the top accolade which is to win The Highland Society of London’s Gold Medal for Piobaireachd at the Argyllshire Gathering or the Northern Meeting.

As a youngster James studied with Pipe Major Iain Murdo Morrison, widely regarded as one of the finest players of his generation and a previous winner of many piping accolades, and began returning to him for lessons over the past year, whenever he was ‘home’ to Lewis on holiday.

James now lives in Glasgow and has a degree in piping from the Royal Scottish Academy of Music and Drama, now The Royal Conservatoire of Scotland.

He is “chuffed” to have won the Silver Medal. He said: “It’s nice to win a prize. It was my first year competing in quite a few years. The last time I competed was maybe 2010.”

James had also competed at the Oban Games, the previous week, but not been successful. He attributed his changed fortunes at the Northern Meeting to “more focus and proper tuning”.

He also spoke of the differences between playing in big band gigs and traditional solo competition.

“I’ve always enjoyed playing piobaireachd but don’t really get that much of a chance to do it. I’ve been touring and gigging for the last number of years but when I was wee I used to compete a lot in solo competitions and it’s good to come back to it this year.”

He said: “There’s a big emphasis for solo piping on the sound of the instrument. When you’re playing in the folk band the pipes are set in B flat concert pitch and then in solo competitions you kind of play a different chanter – a sharper, brighter sound, so that’s musically one element of it.

“You also need to be very well set up so that they’re in tune for a prolonged period of time because the tune can be 20 minutes.

“With gigging and that kind of stuff there’s lots of room for improvisation but competing is very strict. You’ve got to follow the score very closely and that’s part of the beauty of it as well. You’ve got these parameters set for you and it’s up to you to make music with it.”

James said Iain Murdo Morrison had “helped me hugely with the tunes for the past year”, adding: “Every time I’ve been going home I’ve taken the pipes up with me. He doesn’t let anything slip through the net so that’s been good as well. I think he was quite chuffed as well (with the win). I think he was quite happy.”

James admitted he had suffered from “a different type of nerves” during the competition.

“With the band we’ve played at quite a few festivals over the years. You’re comfortable playing in front of a crowd of 6,000 and it all changes when you’re on the boards in front of three judges and a handful of knowledgeable people in the crowd.”

However, he added: “I definitely enjoyed it, otherwise I wouldn’t be doing it. I played the March, Strathspey and Reel competition earlier in the day and I was maybe slightly more nervy for that, so when I came up for the piobaireachd my nerves were really away and I could focus on the tune.”

So will James be back next year, in the Gold Medal competitions?