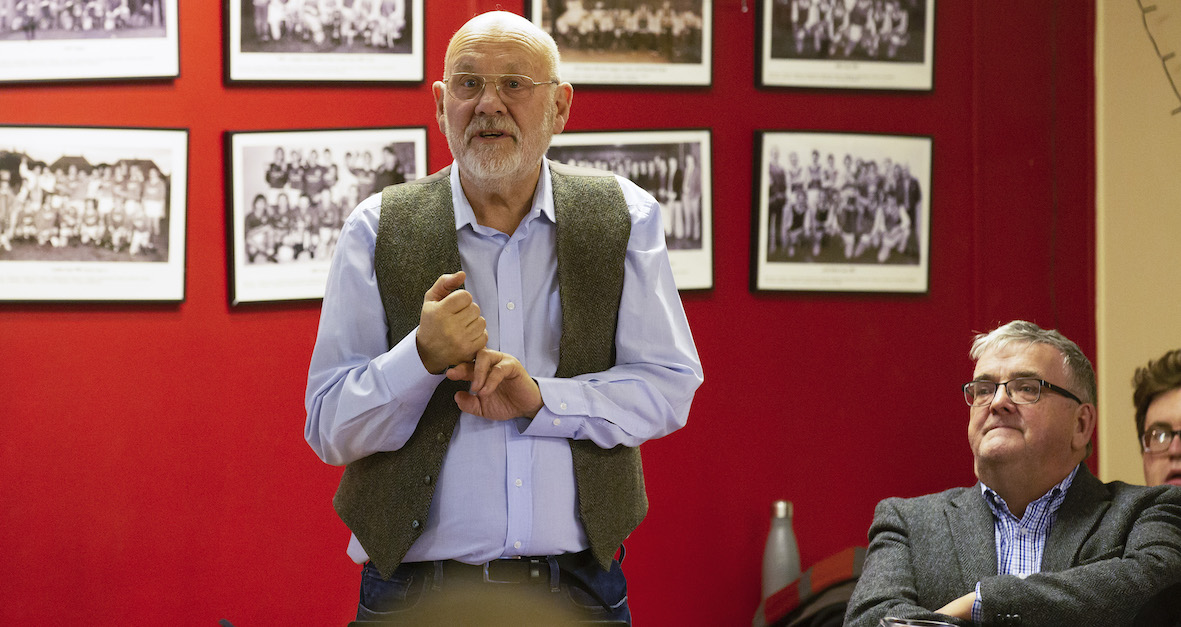 The Annual General Meeting of Point and Sandwick Trust was held on Tuesday night (November 19), with the appointment of new directors among the top items on the agenda.

Donald ‘Buck’ Macdonald, Catherine Anne Smith and Jane Watson were formally appointed as board directors to the community wind farm charity and will serve a four-year term.

A number of cheques were also presented to community groups at the meeting, which took place at Ionad Stoodie in Point.

These included £3,000 to two friendship clubs for the over 60s, Cairdean Og Allt nan Gall and Tiumpan Young at Heart club, £1,000 to Sandwick Hall and Recreation Enterprise and £300 to Point Parent and Toddler Group.

John Moffat and Calum MacDonald both spoke of the wind farm refinancing process, which was successfully concluded in September and brought the interest repayments on the loans to build Beinn Ghrideag down to half the previous rate.

Updates were given on a number of projects being led by Point and Sandwick Trust including research into a hydrogen ferry, and there was also a look to the future, with chairman Norman Mackenzie suggesting the Trust could get involve with bigger capital projects in the future, in order to “leave a legacy”, and general manager Donald John MacSween revealing that a new community consultation is to be carried out to ascertain the community’s most current spending priorities.

Norman Mackenzie opened the meeting with his chairman’s report and admitted the past year had been “a difficult one”, due technical problems with one of the turbines and low wind. However, he said the Trust had “still managed to maintain activity in line with our charitable purpose”, keeping up with payments to partners and community groups “so in that sense it’s been a successful year”.

He recapped on a number of stand-out projects from the year and said: “Looking forward, the future prospects for Point and Sandwick Trust are solid. We’ve been through difficult times, we’ve reached the end of our five-year programme and we have to look at where we go next.”

Refinancing, he said, gave “clarity” and would “allow us to plan better” but he also said: “We need to think about a lasting legacy.”

Projects such as the hydrogen ferry could be part of that legacy and the chairman added: “We are proud to be an organisation that’s at the forefront of technological advancement in the Western Isles – thanks to Calum. His work is extremely important to the Trust and the island.”

Approaching the appointment of new directors, he then said: “A community charity cannot function without people who are prepared to serve.”

A number of directors stood down – Kenny Dan Macdonald, Liz Chaplin and Matt Bruce – and were thanked for their years of service before the nominations were made for their replacements. Donald ‘Buck’ Macdonald was nominated by Gordon Mackay, Catherine Anne Smith by Matt Bruce and Jane Watson by Angus McCormack, PST honorary president.

Speaking after the meeting, Catherine Anne Smith, who works for Tighean Innse Gall, said: “I am really pleased to be involved with Point and Sandwick Development Trust and have enjoyed learning about all the important stuff going on in the background that people don’t see. A phenomenal amount of work goes on to enable the Trust to support the community we cover. I’m really looking forward to the future of the Trust and being involved in all their exciting new plans.”

Donald Macdonald, who works in IT for Comhairle nan Eilean Siar, said: “Having been co-opted to the board for the past year, I’ve seen first-hand the positive effect Point and Sandwick Trust are having on our community for both young and old, large or small scale, so I’m delighted now to start a full term as a trustee.

“Point and Sandwick Trust have been ambitious from the very beginning and, after hearing the various reports at our AGM, it’s great to see that’s still the case today. It’s a fantastic model of a successful community-owned enterprise and I’m delighted to be a small part of it.”

Jane Watson, also in IT at the Comhairle, said: “It’s really interesting to learn more about what’s happening with the project, to see the vision, and get involved in things that are helping the community and the wider Western Isles.

“It’s going to be interesting to see the new five-year plan and obviously you are learning as you go along. I attended my first board meeting before the AGM and it was very informative.”

The newly-appointed directors helped present the cheques to some of the community groups who were receiving revenue support at the AGM.

In response, Kenny Nicholson, chairman of the Tiumpan Young at Heart club, told the meeting: “We’ve discussed a lot about energy tonight. The energy that Point and Sandwick Trust transfers to our club is beyond anything that we can see. These people get such a buzz from the help we get from these guys that it goes beyond words – so thanks again.”