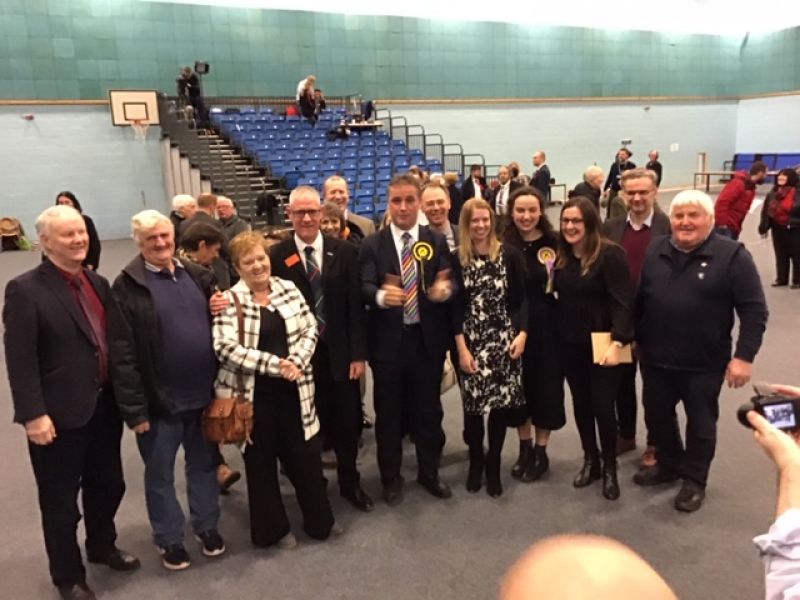 There was a very special cheer at the end of the night for journalist and public relations person, Michelle Macleod, pictured above centre, making a very welcome return to public life following her cardiac arrest in Leverburgh after running her leg of the Harris marathon.

Now equipped with a personal defibrillator she spent the night at the count in Ionad Spòrs Leòdhais, being deluged in care and concern by all those present...plus doubtless repetitive remarks about how she is now a bionic woman.

The declaration of the result made by returning officer Malcolm Burr was as follows:

Mr MacNeil’s first response is: ”That’s the way we do it in the Western Isles!“

He went on to say: “Can I particularly thank staff at the count here for their hard work all night and those who worked at the polling stations. Tonight’s election can be viewed as a disaster or a success. A disaster that we are going to be stuck with Boris Johnson as Prime Minister, but a success if it leads to a move to Independence for Scotland.”

He added a special mentioned for Michelle which was specially cheered by those present.

Na h-Eileanan an Iar SNP MSP Alasdair Allan later hailed the re-election of Angus Brendan MacNeil to serve as the MP for a historic fifth term.

The SNP surged to victory with over 45% of the vote while Labour and the Tories battled it out for a second place finish with 28% and 22% respectively. The Liberal Democrat candidate received 4% and failed to retain his deposit.

Alasdair Allan MSP said: “Angus Brendan is a first-rate constituency MP and I’m looking forwarding to continuing to work with him on the issues that affect the lives of islanders.

“This is an emphatic victory for the SNP locally in what looks to be shaping up as a very positive night for the SNP. Angus Brendan has more than doubled his majority while Labour have registered their worst performance in the islands at a UK General Election since 1974, leaving them scrapping with the Tories for second place.

“I know from speaking to voters on the doors that the prospect of a Boris Johnson majority Tory Government with dread. While it is still early in the night and results are still coming in, it is clear that Scotland is now on a very different political journey to that of the rest of the United Kingdom. SNP MPs will work hard to stand up for the people of Scotland and make sure Scotland’s future is in Scotland’s hands.”