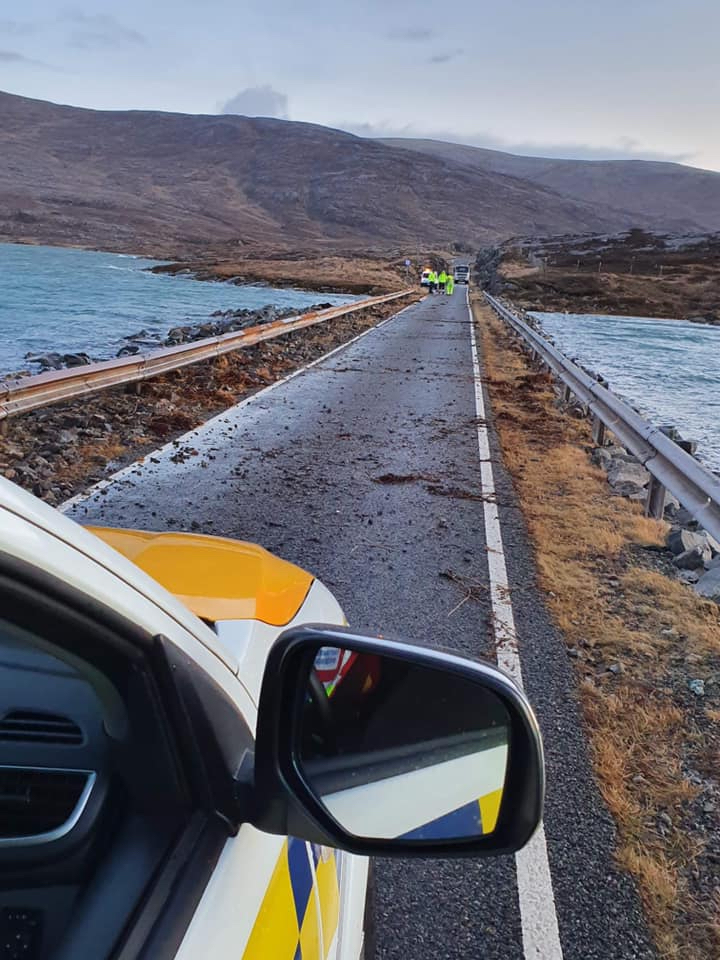 And this won open praise and admiration from members of the public…including one person who personally delivered a pizza to the team dealing with the crisis on the Braighe crossing.

The photograph shows the impact of the storm on the Seilibost causeway on the road between Tarbert and Leverburgh where Coastguard were also involved in a closure and clearance operation.

Meanwhile stormy conditions are continuing to affect ferry services across the Islands with sailings from Castlebay and Lochboisdale already cancelled.

Coastguard Rescue Teams on the Isle of Lewis were called out to ensure care workers were able to reach vulnerable and elderly people during the stormy weather on Monday (January 13).

Using their 4X4 vehicles and knowledge of driving in severe weather and high tide conditions they were able to transport care workers around the area to reach those people who are among the most vulnerable in the community.

"Our Officers, both volunteer and full time, are trained to drive in these conditions and are happy to be called upon by the other emergency services and the local authorities to assist delivery of essential services.

"With the assistance of our teams more than a dozen people were visited yesterday that may have otherwise been left isolated and vulnerable in the severe weather conditions brought about by Storm Brendan."

Stornoway Coastguard Rescue Team said on Facebook: "Hi folks, on behalf of the Coastguard teams, the Area team (the full time troops), the CGOC, CnES cleansing staff, Donal with Peels' digger and Highlands & Islands Police Division, a huge thank you for all the kind messages, soups and sandwiches, teas, coffees and to the lovely member of the public who went back to town and came back with a pizza for us. Most of all, thanks to the residents of Point for being patient and understanding during the last 48 hours."

Murdo Macaulay outlined some of the workload on Monday 13th January:

0649 GMT: Stornoway Coastguard Rescue Team together with Duty Officers S18E, S18D and ‪AC18‬, tasked at the request of Police Scotland to close and man the Braighe Causeway, Stornoway, during adverse weather conditions and high tide. All parties released when causeway deemed safe for public use.

0915 GMT: Portree and Duntulm Coastguard Rescue Teams and Scottish Fire & Rescue were tasked to a vessel taking water at Uig Harbour, Isle of Skye. The vessel was pumped out and secured on the shore.

1058 GMT: RNLI Kyle of Lochalsh ILB, and Kyle and Dunvegan Coastguard Rescue Teams were dispatched to assist the single occupant of an open fishing vessel who, although on a mooring, was unable to get ashore as conditions were too difficult to safely use his tender. The lifeboat rescued the casualty and brought him safe and well to the shore.

1509 GMT: Benbecula, Lochboisdale and Griminish Coastguard Rescue Teams tasked at the request of Police Scotland to assist with patrols of causeways and welfare checks on vulnerable persons. All parties released when the causeways deemed safe for public use.

1830 GMT: Stornoway Coastguard Rescue Team together with Duty Officer ‪AC18‬, tasked at the request of Police Scotland to close and man the Braighe Causeway, Stornoway, during adverse weather conditions and high tide. All parties released when causeway deemed safe for public use.

2133 GMT: Salen and Lochaline Coastguard Rescue Teams together with Duty Officer SCOO S18A, tasked at the request of Police Scotland to assist motorists stuck in vehicles at Corran Glen at A861 Ardgower. Due to falling tides and improving conditions, vehicles cleared flooded area and teams thereafter stood down.