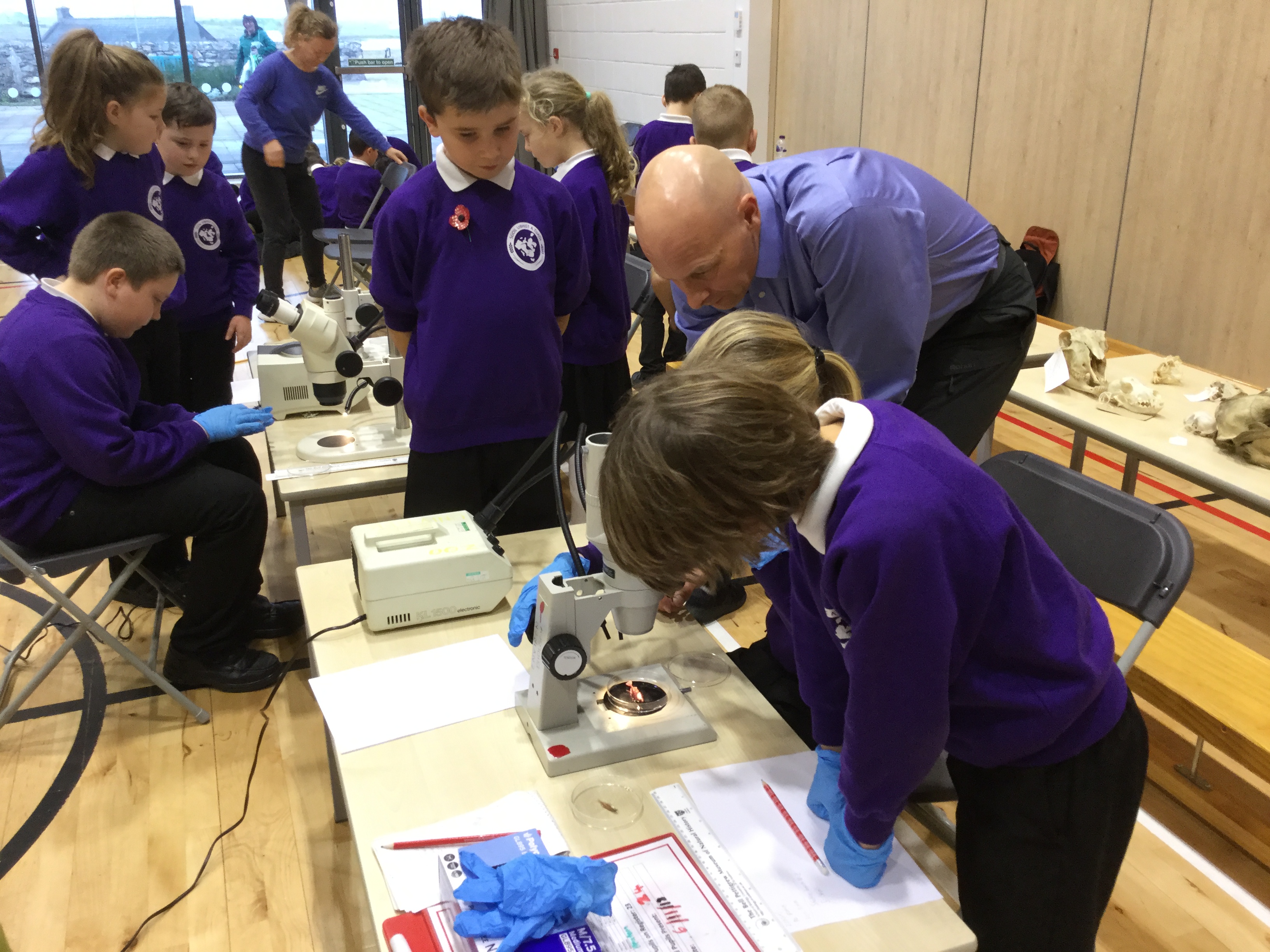 There’s a big question currently on pupils’ minds at Sgoil Uibhist a Tuath in North Uist: why are the local stickleback fish losing their spines? It’s an investigation that’s seen the school recently receive a grant of £2454.41 from the prestigious Royal Society, the world’s oldest independent scientific academy, for equipment to aid them in their research.

Dr Carl Smith, Reader in Natural History at the University of St Andrews, has spent a decade researching why the stickleback fish population in North Uist are completely losing their distinctive bony armour of spines and plates.

Since October 2019, he’s been the STEM Partner for Sgoil Uibhist a Tuath, with pupils from Primary 1-7 helping him with his research on the island and increasing their own knowledge of natural history and science terminology along the way.

“This is real research that is happening at scientific level, and we’ve involved our children in looking at the types of things that these scientists are actually examining,” explains Head Teacher Sarah Jane MacSween.

In terms of science education, the goal is to introduce pupils to ideas about evolution, natural selection, and how the environment shapes these processes, particularly in relation to their local surroundings. And the pupils are not only taking part in scientific activities – such as formulating hypotheses about the fish, collecting samples and data, making observations, and drawing conclusions – but learning the terminology behind the activities, too.

“Although the vocabulary is very extensive, the students are using that kind of terminology now within science, because of the input that we’ve had from Dr Smith. He works from P1-P7 and he can come right down to their level, but he doesn’t dilute the language for them, he still gives them all the scientific terminology,” says Sarah Jane.

Dr Smith made an initial visit to Sgoil Uibhist a Tuath in November 2018 and discussed the topic of stickleback evolution with teachers, met with pupils, and visited a local loch with them. Pupils’ involvement in the research then began in October 2019, when Dr Carl Smith first visited the school to introduce them to the project. As well as familiarising them with the scientific ideas behind the project, he accompanied staff and students on a visit to a local loch to collect sticklebacks, and helped the pupils make entries in their new field notebooks – just as real scientists would.

In April, Dr Smith will be returning to the island to continue his research and update the pupils. The funding from the Royal Society is going towards a new aquarium which will house sticklebacks and sit in the entrance to the school, from where pupils can monitor their behaviour and any visitors to the school can see examples of the learning that’s been taking place.

Dr Smith will return again in June to help the pupils investigate and analyse their findings, and the project is due to continue into the next school year, with pupils presenting their findings to Dr Smith and their peers from Sgoil Bhaile a’ Mhanaich in September. To cap it all off, they’ll attend a prize giving for the best scientific reports, drawings, presentations, and notebooks.

The science project has been such a success that pupils are bringing their learning home: they’re pointing out sticklebacks in local lochs to family members, and some are even developing ambitions to one day become scientists themselves. “There are now about six of children who would like to be scientists because they’ve been working alongside Dr Smith, doing the fieldwork that he would be doing with his students, and with other professors from around the world,” says Sarah Jane of the impact of the project.

The calibre of the project has also been recognised not just by the grant from the Royal Society, but also in the positive feedback they offered the school; it was described as a “very impressive” investigation, one that is unique “whilst still fulfilling scientific rigour.” The judges commented that the pupils’ search for answers to the evolution of the sticklebacks “will stimulate their thinking and develop scientific skills for all pupils as they move up the primary school and which can be utilised in secondary education.”

“In terms of developing the young workforce, it’s really been at the chalk face in terms of the work that’s been done,” says Sarah Jane. “We’re eternally grateful to Dr Smith for allowing our children the opportunity to get that experience. It’s an exciting project that will have a lasting effect on all who participate and will give them a greater understanding of what it means to be an islander, living in a unique environment.”

Pictured: Sgoil Uibhist a Tuath pupils helping Dr Carl Smith with his research outside and in the classroom.