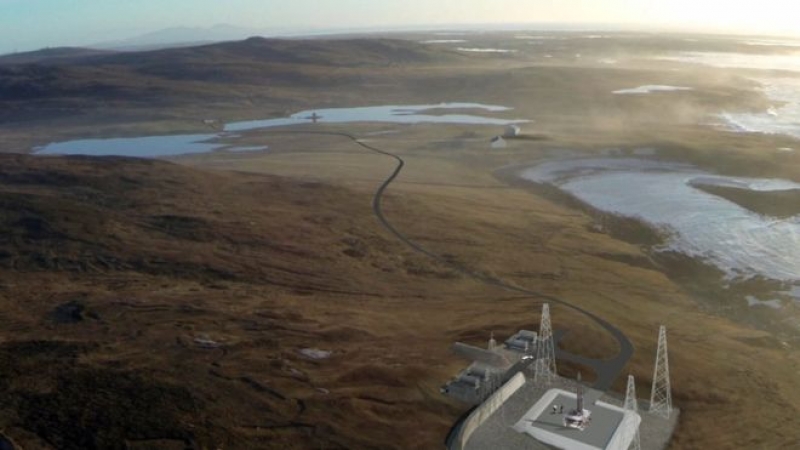 Scottish Government ministers have today (Tuesday 7 April) said that they ‘reserve the right to intervene’ in the planning process for a vertical launch commercial spaceport in North Uist.

The Spaceport 1 project, led by Comhairle nan Eilean Siar, would see a launch facility constructed at Scolpaig on the north-west coast of North Uist.

CnES is working with Highlands and Islands Enterprise (HIE), Ministry of Defence operator QinetiQ and a UK-based consultancy called Commercial Space Technologies (CST) on the development of the idea, which was publicly unveiled in June 2019.

The planning application was submitted in June 2019 and has to date attracted 637 public comments, of which 622 are objections and 13 support the proposal.

The directive from the Scottish Government’s directorate for local government and communities was sent yesterday (Monday 6 April) and Comhairle planning officer Alastair Banks has acknowledged it in a reply to ministers sent today.

The Comhairle has agreed to invest £1 million purchasing the land where the spaceport would be located and is the lead partner in the development consortium. It is also the planning authority which would grant permission for the development to go ahead.

At the time of launching the proposal, Comhairle leader Councillor Roddie Mackay said: “This is a critical strategic investment for the Comhairle and the North Uist community. The economic benefits that would flow from this project are immense and we are delighted to offer it our full backing.”

Consultation meetings on the proposal were held in Carinish Hall on 18 and 19 September last year, after meetings in August were cancelled to allow for times more convenient for local residents.

Following the public meetings, a number of comments from consultees were sent to the Comhairle’s planning department.

The Royal Society for the Protection of Birds (RSPB) asked that an environmental impact assessment be carried out at an early stage in the planning process. They said: “This is an unusual proposal and it is important that the applicant properly assesses any impacts on wildlife in the area. We are concerned that breeding birds could be disturbed by the rocket launches and any increased activity in the area. We need more information on what would happen if things went wrong. For instance, if a launch fails, whether there could be a risk of damage to habitat from fires or falling debris or pollution of ground water or the marine environment.”

In their comment on the application, Scottish Natural Heritage said: “There has been no information or assessments made on how this proposal will affect nearby internationally and nationally important protected sites. We therefore object to this proposal until further information is obtained from the applicant.”

And the Ministry of Defence commented: “ It is strongly recommended that the applicant engages with MOD prior to developing further applications on this site in order that possible conflicts can be identified and potentially mitigated or resolved….Additional concerns relate to the possibility of projectiles / debris falling during a rocket launch and flight, in or close to military T&E (test and evaluation) ranges which has not only potential health and safety impacts but may impact on T&E activities.”

Scottish Ministers have authority to intervene in determining a planning proposal, whether an application or an appeal, where it is felt there is a national interest in doing so.

Today’s ministerial directive says that “In the event that Comhairle nan Eilean Siar is minded to grant planning permission” for the proposed launch facility, CnES should supply Scottish ministers with all planning documentation including plans, environmental assessments, representations from interested parties and petitions relating to the planning application.

They must also submit “the planning authority’s reasons for proposing to grant planning permission, including, where relevant, a statement setting out the reasoning (i) behind the authority’s decision to depart from the development plan, and/or (ii) for taking the decision it has, in light of any objections received.”

The full letter from Scottish minister is available at https://www.gov.scot/binaries/content/documents/govscot/publications/correspondence/2020/04/planning-decision-phase-1-spaceport-infrastructure-at-scolpaig-balemartin-isle-of-north-uist/documents/nod-ces-009-notification-direction-letter/nod-ces-009-notification-direction-letter/govscot%3Adocument/NOD-CES-009%2B-%2BNotification%2BDirection%2BLetter_Redacted.pdf

And the application documents can be read here https://planning.cne-siar.gov.uk/PublicAccess/applicationDetails.do?activeTab=summary&keyVal=PTPPUTRO02A00