LATEST:  Passengers have now boarded the Loch Seaforth.  Clearance is awaited from Lloyds Maritime services for the repaired vessel to set out.  Estimated departure time is now 2130hrs.  Vehicles - above - awaiting ship to be readied for sea.

It is understood the incident arose from a collision between the ferry and the pier's protective covering.

CalMac staff are unable to say officially that the ferry will sail until paperwork arrives from the marine insurers. It is not known if the delays arise in London or in Gourock.

EARLIER::: 1940hrs:  According to Ship AIS, the Loch Seaforth is expected in Ullapool at about half past midnight.

In Ullapool, waiting passengers report no news on ferry status.

Others talk of previous delays in Ullapool without information.  One said:"This happened to us last year…sat from 4 pm till 4.30 am in waiting room in Ullapool…not even a cup of tea coffee…when eventually got on board and cafe closed as staff were off duty…disgusted the way we were treated."

Officially, the 6.30pm from Ullapool has never been cancelled.

The Tarbert ferry tomorrow Monday morning is expected to be delayed by one hour.  This is a knock-on effect from today's delays. 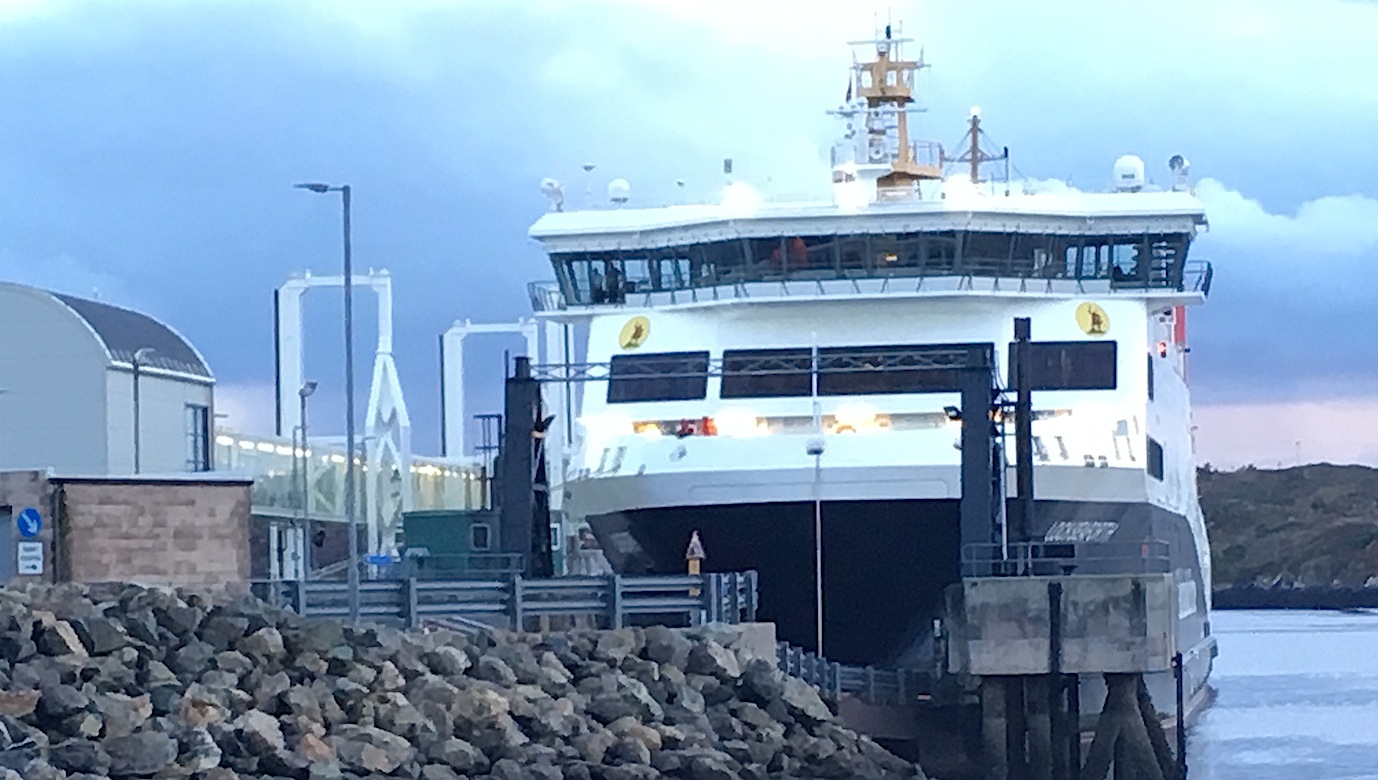 A new "technical issue" has hit the Loch Seaforth ferry, presently in Stornoway - (pictured above at 6.15pm this evening (Sunday)

CalMac Ferries warned in mid-afternoon of the "high possibility" of disruption or cancellation of the service tonight (October 14th).

The issue involves the bow doors.

Traffic from Stornoway due to go on the 3pm sailing today, was diverted to Tarbert where the Hebrides ferry was delayed to await the additional vehicles.

The Hebrides left at 5.20pm instead of the scheduled time of 4.25pm and its services are going to be running late for the rest of the day as a result.

CalMac is now warning of disruption to freight services tonight and on Monday.

Strangely, the 6.30pm service from Ullapool has not been announced as officially cancelled although the ferry was still in Stornoway at that time.

There was an instant reaction to the news on welovestornoway.com Facebook Page with Graham Macleod commenting: "Poor customer service on such a lifeline service, other options have to be considered now surely, how much money are people losing because of all these problems e.g. holidays, hotels, work etc."

Kenny Maclean said: "This vessel is feeling the effects of being run round the clock. CalMac need to LISTEN to local people! The Stornoway run is a nightmare for locals during the tourist season."

Another ferry breakdown affected the service to the Small Isles - Canna, Muck, Eigg and Rum - where the Lochnevis ferry broke down and only passenger services will be available today and tomorrow.  The Lochnevis is 18 years old.

Elsewhere, in the aftermath of storm Callum, services returned to normal, with even the oft-cancelled Mallaig to Lochboisdale service running today.