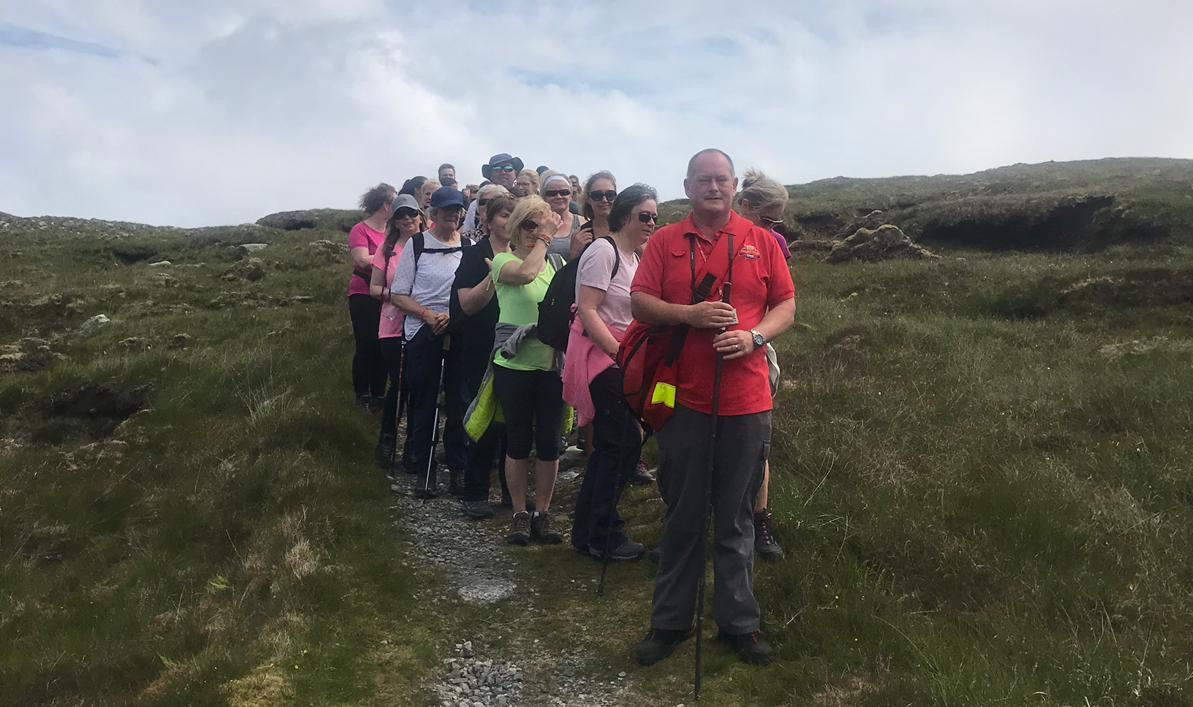 The Postman’s Walk must have been a lonely walk for postmen like Kenny Mackay, the former Rhenigidale Postman.

Kenny Mackay must have walked that four-mile route thousands of times and to do the route properly Kenny insisted that the walk begin in the village at the postbox.

At the postbox Kenny himself was there to wave everyone off at the beginning and set them of on their way to Urgha.

It is not an easy walk by any means and the thought of him doing the walk there and back three times a week kept some folk going during ‘low’ points.  Remembering the reason why they were all there one walker whose family has been recently touched by cancer said at one point that although it was hard and painful at times it is nothing compared to chemotherapy.

In keeping with the postman’s theme, as the walkers came over the last hill in Urgha they spotted the distinctive van and uniform of Royal Mail.

This was present Harris Postie Iain MacAskill who took time off work to join them, along with his son, and finished the final part of the walk with everyone.

As a memento and as a 'thank you' for their contribution and efforts Iain handed everyone a 'thank you' letter stamped with a special personalised stamp to mark the occasion.  He also presented the committee with a generous donation from fellow Royal Mail colleagues in the Harris Post Office.

A huge number took part in the challenging but hugely rewarding route.  Logistically it’s not an easy walk to do as you need transport either side but organisers arranged transport to and from the start and finish and laid on a well earned lunch in the Scaladale Centre  on their return.

It was a successful event in many ways and even the sun shone that day.

To date there has been just over £2500 raised for Cancer Research.

The committee would like to thank the following for their help, assistance and contribution before the event and on the day; Tony Wade and Lewis Sports Centre Staff, North Harris Trust, The Scaladale Centre, Lochs Motor Transport Ltd, HM Coastguards, Kenny Mackay, former Postman and Iain MacAskill and Robert Mackinnon, current postmen.