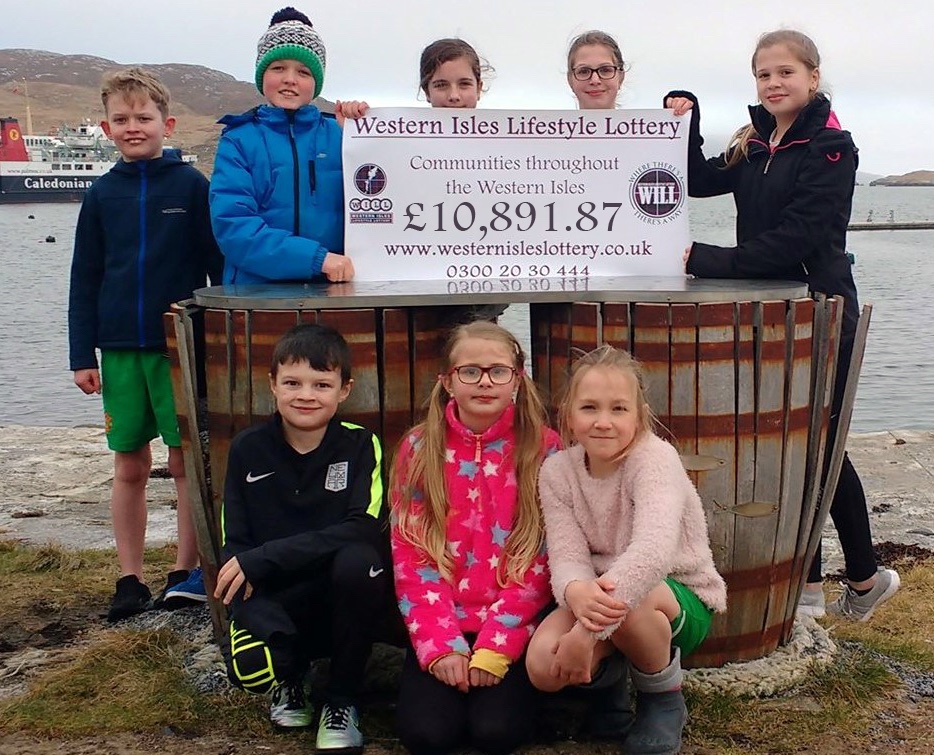 In just 18 months, loyal Supporters of the Western Isles Lottery in Barra have ensured a variety of benefits for their own Island with £10,981 in proceeds being returned to their own postcode area.

As in other areas, the renewal of the Christmas Festive Lighting on the Island was the first priority for Barra & Vatersay Ltd who receive the monthly proceeds and distributes the funds. This was added to in 2018 with the placing of four decorated Christmas trees around the Island.

The Herring Trail tourist attraction needed an upgrade and 15 new barrels were purchased which are now ready to be installed with inscriptions fitted.

A first for Barra was having a Public Address system and the Lottery funded the required laptop at a cost of £339.00 which has now been used at many public events.

The Committee of the Annie Jane Memorial requested funding to enable their DVD Film to be produced and Lottery funding covered the music costs of £174.00.The Committee are now receiving funding to erect a decorative wall around the memorial at a cost of £750.00.

Northbay Playpark successfully applied for funding to upgrade their facility for youngsters on the Island and Supporters raised £1,887.60 for this cause over a 4 month period to end December 2018.

The organisers of Barra’s Women’s Day, scheduled for 23 March, have been awarded £150 to help with the costs of hosting this event.

As in other areas of the Western Isles, Barra is soon to be presented to the public with summer bedding pots and flower displays across the area.  Funding of £1,000 is being presented to the Northbay Garden Project (Garadh a bhagh a Tuach) for this purpose which will double the displays produced in the past.

The War Memorial Committee have successfully applied for funding to paint the existing flag poles and replace the flags at a cost of £400.

Currently, funding is being raised for The Barra Games Committee up to end April 2019.

The more Supporters who Join the Lottery will determine how much will be raised. Tickets can be purchased at www.westernisleslottery.co.uk OR by telephoning 0300 30 20 444 (local rates apply).

In addition to the funds having been raised for a variety of projects, Barra Supporters have also been lucky in the Lottery’s Weekly Draws, sharing a total of £2,791.87 in Prize Winnings since its launch.